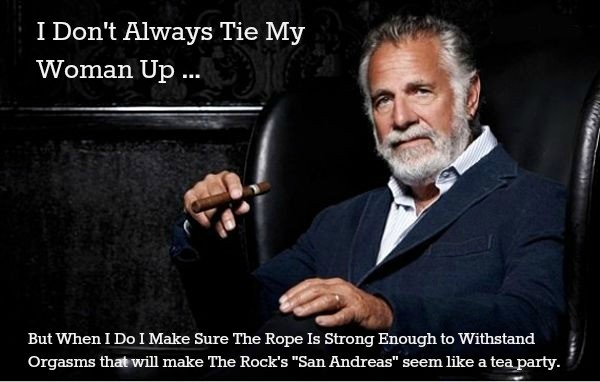 From The Most Interesting Man In The World

There’s nothing more encouraging than a man-of-a-certain-age who dedicates his all to keeping his lover on her toes (or perhaps her knees?).

In response to my recent post, 2 Secret Things Women Want in Bed, (a penchant for 50 Shades of Gray-style ravishment with, hopefully, more proficient prose) this ladykiller left a comment outstripping (so to speak) my most inspired married sex treatises.

With his years of experience, he confirms what I’ve long suspected.

For women, the most powerful sexual organ in our bodies, is the brain:

Speaking as a mere (English) male, caught up in the maelstrom of my other half’s raging libido, I can most certainly confirm that the female of the species seeks the reality of rough sex, when physical bondage and domination are done in a way that doesn’t cause any lasting harm.

She wants to be held down, tightly bound, gagged and whipped into ‘submission’ while going orgasmically insane at the same time.

She’s only disappointed if marks fade too soon! She is so attuned to kink that she will climax if I softly tell her a naughty story, without any of the physical stuff at all.

So be reassured, all you young whippersnappers, that kink really is the secret to an eternal sex life. Milady crashes into delightful oblivion before I do, but to be fair, it is after orgasms well into double figures. There’s no way I can keep up with that.

A woman demanding (however subtly) to be dominated and controlled can have all this.

She knows full well the power she has, while she’s lying there tied and ‘helpless’— we both know what a joke that is, but mutually ignore that bit. Though it will all be over if I tie her up and forget where I left her.

After that it will be into Shady Pines and tying up nurses. Something to look forward to.

It has been her choice to be my sex-object, and part of the deal , she says, is that I can live forever … Still working on that, will keep you informed.

Is it just me? Or does this make we younger set feel hopeful? Tell us your most inspiring philosophies d’la amour (PG-13 please!)