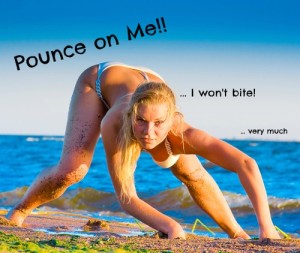 Today I want to write about sex. Specifically, about what women want in bed.

A month or so back I found myself in a gay club dancing with lovely men who made me feel fun, sexy and beautiful.

But none had any interest in tempting me away from my domestic haven.

However, I came home from that experience feeling restless and mid-life crisis-y.

I realized my 17-year relationship-now-marriage had some pretty predictable sexual patterns, which happens in any long-term relationship.

But, suddenly I felt a strong compulsion to break free of those patterns.

Although I wanted to shake things up, I knew swinging, polyamory or “taking a lover” would be the death knell of my treasured marriage, therefore not the kind of “shaking things up” I wanted to do.

So I turned to my man for help.

What makes my husband so incredibly badass is that when I said, “I think I’m having a midlife crisis. I’m sexually bored.”

He instantly said, “Let’s do something about it!”

Realizing it was my issue, not his, I went to see my sage former therapist and admitted that I didn’t want tender lovemaking.

Instead, I found books and movies where women are sexually ravished and even aggressively taken exciting and that I judged myself for it.

I was raised Mormon, so my psychological, sexual landscape has definitely been influenced by the inherent sexual repression in that culture.

I write a lot about sex, which makes me seem like a libertine, but in many ways I’m repressed and frequently do battle with Morality Police; the priggish Jacques and Ferrar, that live inside my head.

My therapist, who is often a place of temperate permission, explained that she believes, and I quote:

“The ravishment fantasy is most likely the rule for women, rather than the exception.”

She recently watched a documentary on the endangered big cat, the Canadian Lynx, and described her surprise at how aggressive the male is with the female during the mating ritual. The male will bite the female’s neck, scratching her and holding her down forcefully.

My doc surmised that humans most likely have a genetic or biological sexual impulse that is very similar to that of animals.

After my session, whilst googling the keyphrase:

What do Women Want in Bed?

I stumbled on a recent Ask Men article titled, 5 Things Women Secretly Want In Bed. Two of them made my Morality Police, the irascible Jacques and Ferrar, take note.

The author wrote: Secret Desire #1 — Get Aggressive In Bed

“Just about every woman I encountered had the words ‘more aggressive sex’ rolling off her tongue.

“From being tied up and spanked to having their hair pulled and being mildly asphyxiated, the women were quite enthusiastic about aggressive sex.

“Of course, I’m not implying that you should go home and smack your (lady) up, but instead, maybe a little roughhousing in the bedroom can work wonders for your sex life.”

(Shannon here: this language might offend the feminists in many of us. But I agree with the spirit of the note.)

“Ah, fantasies, the beauty of them lies in the fact that many are not realized. But as one woman put it: ‘I am tired of being that precious lady in the bedroom. I’m tired of making love and doing things gently all the time.’ (Shannon quietly raises hand)

“I want him to have raunchy sex with me and talk to me as though he just met me and cares nothing about what I want. I want him to ravish me like an animal and tell me to be quiet, whenever I try to say something.’

“They simply fear that if they behave in such a manner, then their men will think less of them, and some are even afraid that their men will mistakenly begin treating them differently outside the bedroom as well.

“All the same, many women are big fans of scenarios such as the one described.”

In the last quote, I particularly appreciate that the author has made a distinction between what women like in bed and what they prefer in real life.

All of this is food for thought and a catalyst to ex-communicate the puritanical, prudish, Victorian Jacques and Ferrar with regards to my midlife ennui.

I recognize that my sexual (and personal) relationship with my husband hasn’t stopped growing.

It’s been stunted a bit by the last 13 years of raising children, but there is nothing that says we can’t pick up the sexual reins and continue to grow and even surprise each other as the years unfold.

I think the ace we have up our sleeve is the genuine goodwill we have toward each other and a willingness to communicate, even the trickiest most vulnerable, uncomfortable stuff.

I’m curious, Female Reader, does the idea of ravishment turn you on and do you incorporate that into your relationship?

And Male Reader, what is your experience with women and how they respond to aggression in bed? (note: aggression that is NOT abusive, but consensual)

P.S. For Mother’s Day my man among men presented me with something just for us. A massage table.

How lucky am I to have a man who shows me day after day that our marriage is his priority. Thank you, my love. I’m a lucky woman.

P. P. S. If you like this article you may also want to check out my relationship website at ShannonColleary.Com

And if you enjoyed this post you’ll love Shannon’s book, “Married Sex: Fact & Fiction.” You can order it HERE.