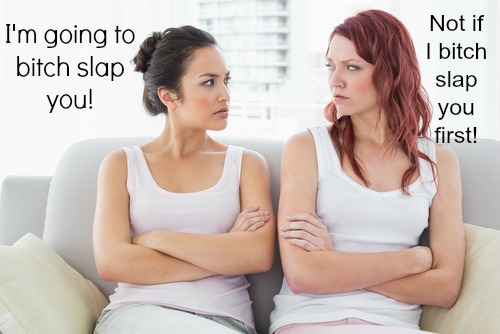 “So what do you do?” the woman at the dinner table on my right asked.

“I’m a writer,” I replied, feeling a bit fraudulent. (Is blogging really writing?)

“What do you write about?” she asked, politely curious.

I always hesitate a bit when people ask this question because, as some of you know, my naked butt’s online along with my sex life.

“I write about parenting and body image and marriage and sometimes (clearing of throat) married sex.”

The woman’s eyes opened infinitesimally, in pleased curiosity. But before she could probe further, a voice chimed in from the head of the table.

I looked down the table of ten people at the source of this comment. It was my neighbor Karen, which utterly surprised me.

She had a dour expression on her face that I’d never seen before. And her voice bristled with anger when she continued, “I mean, you’re our neighbors for Godssakes.”

You could’ve knocked me over with a feather.

The Bowman’s moved in down the street six or seven years ago, and we were thrilled to see them come.

They have two kids roughly our kids’ ages; they’re younger than us, but we seem to share political leanings and child-rearing styles.

I imagined a friendship that would blossom and deepen over the years; the glasses of wine we’d drink over the occasional potluck dinner; our kids disappearing to jump in the trampoline, play ping pong or video games; making memories as they helped each other grow up.

Living in Los Angeles, where I don’t feel comfortable letting my kids roam the streets riding bikes or playing hide-and-seek or kick-the-can the way I did in the suburbs as a child, I was grateful we had a family so close by that our kids could just run back and forth to each other’s homes when they felt like it.

And, at first, that seemed to be the direction our families were heading.

But over the last couple of years we’ve seen less and less and less of our neighbors. We’ve invited them over a few times, but never been invited back.

I wondered if maybe it was because they have a strong religious community and they just didn’t have time for extra social interactions.

Then I wondered if maybe they just didn’t think we were very interesting, (but brushed that aside as, well … how could that be true?)

So, I was really pleased when we ran into them in front of their house, as guests were entering for dinner, and they casually said we should “stop by.”

It never occurred to me that they invited us to be polite, but didn’t really expect us to come.

Not until we walked in and everyone at their dinner party turned to look at us in surprise.

The air was fraught with awkwardness, which was confusing, until Karen’s TMI blurt.

In all of my wonderings about why we never saw our neighbors, it hadn’t occurred to me that our family was radioactive because of me and this blog.

I went into a mini-shame spiral, sitting at that table feeling like a I had a red ‘A’ tattooed on my forehead.

Suddenly, God from the Old Testament of the Bible spoke in my head. He was probably wearing robes, had a beard and wanted to smite me.

Here is what he said:

What is this fixation of yours with sex? How many other people don’t like you because of your stupid, confessional blog?

You aren’t even making any real money with the blog and are losing perfectly good people because of it!

Henry and the girls would have a lot more invitations and friendships if you were a better person and not such a perv.

Old Testament God can be a real little bitch sometimes.</5>

After we made our escape, Henry was a love.

He reassured me that he didn’t mind me sharing some of our marital reality. He reminded me of the married couples who’ve written in to tell me my married sex articles have helped their marriage and their sex lives.

And then he fed me ice cream and rubbed my back (I’m a lucky lady).

So I took stock the next day, and decided to write Karen a conciliatory email, saying I hoped we could be closer friends in real life if she didn’t have to get all of my links to my blog on Facebook.

I offered a friendly unfriend to save our friendship.

I never had a response. Maybe she didn’t get the email? Maybe I should have just walked over and talked to her face-to-face? (But I was still in a bit of a shame spiral)

Maybe she got the email and didn’t want to respond?

Time passed. I wore the mantel of Rejection like a martyr at first. I sought approval and outrage from my friends who still liked me. (I hoped.)

I went through a self-righteous phase where, in my mind, I accused Karen of having an incredibly tight colon.

I ate my Rejection; it tasted like cheese and crackers and Ready-Whip.

I had Writer’s Paralysis, thinking I should just write about serious things, like how ISIS is different from Al Queda.

Then one morning, when I was complaining to my daughter Bridget (who is 10) about the situation; she took my face between her hands, looked me in the eye and said, just like Kanye:

From the mouths of babes. So, this is what I know, four months shy of my 50th birthday.

We cannot abandon the things we love and are passionate about because other people don’t agree or won’t like us.

As long as we do no harm, we must follow our bliss and go where the love is.

I will always be open to friendship with our neighbors (who I don’t think are reading this? And if you are, I did change things up to protect your identities) because, despite the incident, I know they’re wonderful parents and people.

And I hope, should we live nearby our whole lives, there will come a time when things coalesce. In the interim, I’m free for lunch on Mondays.

Are you good at dealing with rejection? If so, enlighten me!