The Embarrassing Thing That Happened During Athletic Lovemaking 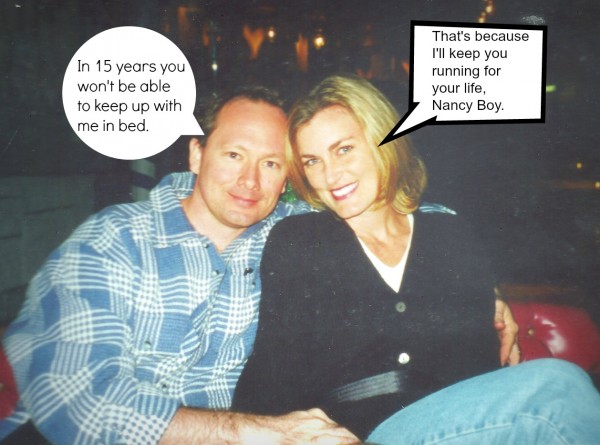 The other night I stopped Henry in the midst of our mating ritual.

“What are you doing?” I asked.

“I’m kissing you,” he replied.

“But why are you kissing me so softly?” I demanded.

“I’m being gentle,” he explained.

“I want you to be gentle in life, but not in bed,” I instructed.

This is an ongoing issue for me. I’m always telling Henry I want fiery passion, even though he can hear everything I do in the bathroom.

I can be exhausting. Be glad you’re not married to me. I thought Henry might just take a rain check.

Instead, he handled my request and swept me into some surprisingly athletic lovemaking.

Where’s he been hiding that? I thought.

While most of me was in the heat of the moment, a sliver of me, probably my left cerebellum, kind of floated above us and admired his vigor and endurance.

But what the heck was happening with me?

In one position, my wrists began to hurt the way they do when I hold a downward dog too long in yoga.

My left hip popped out of joint, then back in. My breathing escalated and my lungs began to protest.

What do you think you’re doing? You sit at a desk eight hours a day and walk around the park twice a week. We’re not in shape for this kind of stuff? You can’t expect us to to keep up!

Just hang in there, okay. Henry’s in his 50s for Godsakes, how much longer can he last?!

Who knows! You insulted his manliness and goaded him into a virtuoso performance, you asshat! Sweet Jesus, I think I sprained my bronchi.

Oh, sure, it’s always about you, isn’t it?! All about you and your damned orgasms! What do we get out of this besides a potential embolism?

Would you guys shut the fuck up, you’re giving me fibrillations!

No one has heart disease in my family, you’re just lazy.

Well, maybe if you treated me to something more taxing than paraplegic water aerobics I could handle this sudden, unfortunate uptick in your sexual exertions!

Stop your yammering bitches! Our OB-Gyn told me that I’m an “average-sized” clitoris, okay? Not like Shannon’s friend Caprice whose apparently massive clitoris orgasms when she sneezes. I’m just average! I have to concentrate!

“Honey?” I query my masterful and apparently superiorly conditioned husband.

“I know thith might be an inconvenient thime, but do you think maybe …”

“What do you need. Anything, just tell me!”

Silence in which you could hear fiery passion snuffed out like a mafia soldier who slept with an undercover Fed. Be careful what you wish for in bed after 40. You jutht might get it.

And if you like this ribald tale you will love Shannon’s book, “Married Sex: Fact & Fiction.” You can order it right here!

26 thoughts on “The Embarrassing Thing That Happened During Athletic Lovemaking”