The Clitoris: Does Size Really Matter? 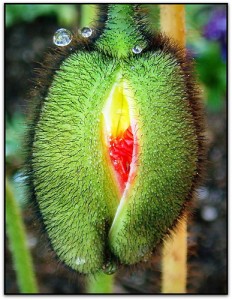 (In this post I will use Google-recommended euphemisms for the word VAGINA. They will be written ALL IN CAPS)

Henry has informed me that I am blogging entirely too much about the BIRTH CANNON, so I perused my recent posts and discovered he’s right. I apologize if I’ve offended anyone.

Having said that, the following post is yet again thematically bound to that enigma, wrapped inside of a conundrum, housing the labyrinth that is the LADY JANE.

It will be my last such post for at least two months. I will be going on a VA-JAY-JAY cleanse after this. So bear with me
Yesterday I had my regular check-up with my long-time OBGYN, Dr. Beezy.

I had a burning … question I needed answered after my friend Dolores confessed she has to try not to orgasm. That practically anything can bring one on; including laughing energetically, sneezing due to seasonal allergies, accidentally touching the dryer when it’s on — because apparently she has a colossal clitoris.

I instantly felt inadequate. Was I gypped in the clitoral department? Was my orgasm too elusive? Should I be having more of them? Should they be more Kazowee? What the hell was I missing??

Imagine having an orgasm from a sneeze?!

“So,” I said to Dr. Beezy from a reclining position with my feet in stirrups, “You’ve probably seen a lot of LADY BITS in your day.”

“I’ve seen my fair share,” she replied from her station between my legs.

“Hmmm …” said Dr. Beezy as she contemplate my CLEFT TUFT, “No, no, I would definitely say it’s … average.”

“Yes, it’s right there,” she pointed.

“Average,” I mulled, not the most flattering word.

Magnificent would’ve been nice. Promontorial even better. A promontory, in fact, from which one could see the intersection of the Pacific, Atlantic and Indian Oceans the best. But I could live with Average.

“One more thing,” I queried.

I’d also been reading about menopause as I’m on its hit list somewhere in the next five years or so (I tried to move into the Anti-Menopause Witness Protection Program with no luck, my Hormones are simply too conspicuous, especially when they wear the fake mustaches and Justin Timberlake fedoras).

“I was wondering, now that I’m older, if maybe … things aren’t quite what they used to be in my … YUM YUM?”

“There seem to be some pretty depressing adjectives attached to the Menopausal TINGLE FLOWER … you know … lax, slack … flaccid?”

I made a rather high-pitched squeak, then concentrated all my strength in my pelvic floor (standing room only) and performed a Kegel.

I was disappointed when her finger and thumb weren’t severed instantly, to be fished out later and reattached. But I noticed an expression cross Dr. Beezy’s face that suggested things were better than she expected in my … MAP OF TASMANIA.

As you may have noticed Dr. Beezy is not prone to descriptive superlatives.

She then proceeded with the cursory examination, palpitating my breasts, which had been minding their own business engaged in a hand of Canasta, smoking clove cigarettes and tippling Kettel One.

I went instantly from smug self-congratulation about my Average Clitoris and Just-Fine Orifii to picturing myself in an oncology ward.

It’s all fun and games until someone gets cancer.

In the hour between Dr. Beezy finding the nerve-jangling lump and an ultrasound which revealed it to be a benign lump just trying to scare the crap out of me, I was reminded yet again that these bodies are on loan.

They do what they want to do while we’re eating egg whites, flax seeds and hemp hearts, Kegeling away.

They promise us nothing. They can be whimsical and cruel. This being human is an endlessly humbling business.

I wouldn’t mind so much if I had an orgasm when I sneezed.

(If you’re taking your married sex life far too seriously — have a look at Shannon’s married sex column — it’ll settle you right back down.)

25 thoughts on “The Clitoris: Does Size Really Matter?”