What follows are three instances where my sneaky trait got me in trouble. See if you can guess what it is?

My acquaintance had incredibly large breasts. No, I did not touch them! Although I was curious to do so. I wanted to know how much they might weigh; the same as a summer watermelon? Or more like a particularly over-sized water balloon?

I will not get into the details in order to protect the innocent. Except to say,  she mentioned she really needed a new bra; but that because of her build it had to be an 80$ bra and she just couldn’t afford one at the moment.

“Great! I prefer Wacoal,” she said.

We hardly know each other.

I Sell My Daughter Out

“Clare has a crush on your older brother Dane,” I tell Gerald, a sixth-grader in my middle-school carpool.

“Oh my God, mom!” my seventh-grader Bridget shrieks, “Why would you say that?! Clare’s going to kill you!”

Why would I say that? It’s because the three middle schoolers I cart around spend all day together and have a bunch of inside jokes they don’t share with me and so I’m basically just an invisible chauffeur.

The next day Clare comes home from high school with steam evacuating her head via her ears.

She tells me the older brother, Dane, who didn’t know who she was, stopped by her lunch table that afternoon and asked, “Which one of you is Clare?”

Unsuspecting, Clare raised her hand. Later someone told her he wanted to know because Gerald had told him I told Gerald that Clare thought Dane was “hot.”

This prompted Clare to text my sister, Gina, to ask her how she lived with someone like me! A person who tells everybody everything!

To which my sister replied; “I don’t know. She told Geoff Culp I didn’t have any pubic hair when I was in sixth grade.”

My daughter Bridget’s expression says it all. She’s the one in the middle, but I think you knew that. 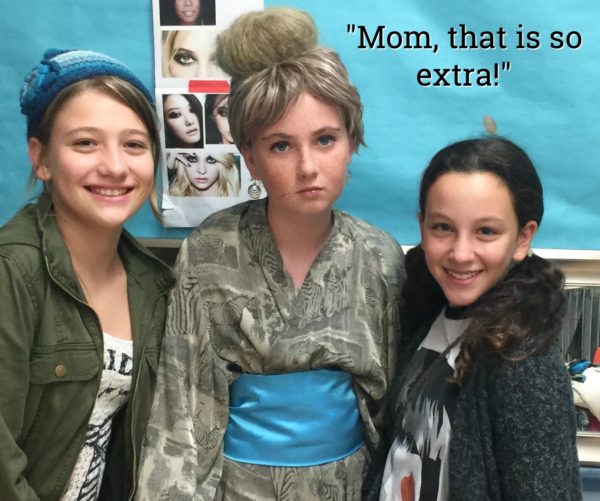 Our lovely neighbors Carol and Andre go to France over the holidays every year. They’re like a third set of parents for my husband and me. (Although, Carol, you’re more like an older sister.)

I decided to kick off the holiday season by throwing them a potluck at our house before they left. 10 neighbors. They could all bring dishes. Then my brain did this:

And I don’t want anyone to feel excluded. And I like them all. But, I can’t be having all of those people bringing food.

It will be too much food. We’ll end up having to throw the food away. And think of all the starving people in the world and we privileged assholes are throwing food away.

Which means I personally will have to eat all of it; including chocolate cakes and loaves of bread.

I’ve already put five pounds on from the teacher appreciation party at the middle school where they were about to throw out a tray of cornbread! Who can throw out cornbread!

I’ll hire a taco truck instead. Even though it’s expensive and I really shouldn’t.

But now 55 people are coming to our party and I need to feed them and also entertain them, because my husband has suddenly become stricken by vertigo, that m-fer and can’t get out of bed. For 10 days!

This is me at the party with our gorgeous neighbor Hitana and my daughters. See all that decoration in the background. Yep, that was all me. 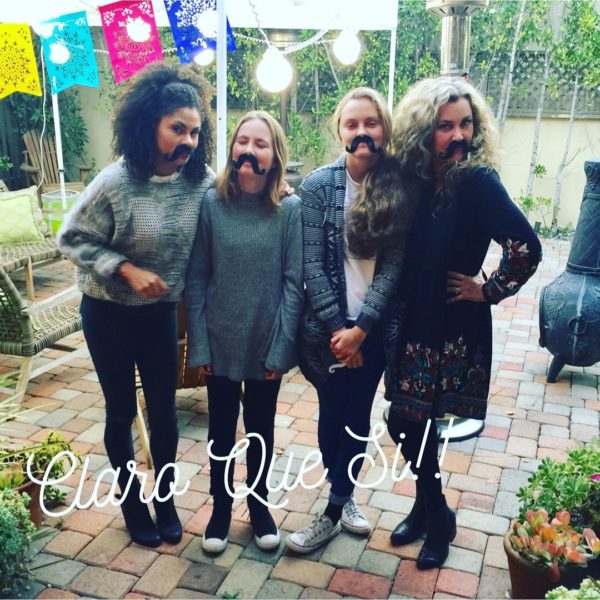 Can you discern which character trait I must give up in 2017? Drumroll please:

I often act before I think, because I want that new dress on sale at Boden even though I already have 71 dresses. I want people to like me so I give them 10 of my Boden dresses then have to buy more.

I have to eat entire cakes that might get thrown out because it feels like such a huge waste (ignoring what it does to my waist.) Many times my impulsivity does stem from empathy and my desire that everyone feel safe, happy and taken care of, but often at my own expense.

So I’m putting myself on lockdown in 2017. Which means that every time I want to click a sale button, offer a favor or monetary gift, eat like it’s my job, I’m planning to use this word to break bad habits:

Which in the mindfulness world means:

For me what that means asking myself these questions before acting:

Am I people-pleasing? Am I rescuing? Am I capable of doing the favor or giving the money without later regretting it or feeling resentful? Will it impact my family life negatively?

Then I can proceed with that information on board. I’d love to know what you plan to give up in 2021! And what you want to embrace! (Besides my friend’s generous breasts. No, you can not give her your hands as a bra.) xoxo S Don’t forget to opt-in to my free updates!