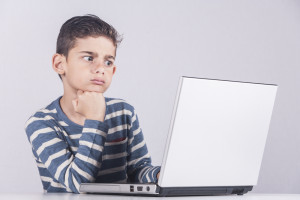 “We need to have a talk,” I announced to my middle school daughters after reading the article, horrified to discover that when asked, “How do you know a guy likes you?,” an 8th grade girl replied:

“He still wants to talk to you after you [give him oral sex].”

My girls heard the intensity in my tone and gave each other their patented Uh-Oh-We-Must-Be-In-Trouble look.

“Don’t worry, you’re not in trouble,” I reassured them. “This is just a ‘teaching moment'” (I’ve patented those).

My girls groaned in two-part harmony.

Eyes rolled back in their heads. They slogged, rather than walked, into my bedroom.

I closed the door behind me in order to spare their father the discomfort of the topic I was about to broach, and to make it more difficult for my girls to flee.

“I want to talk to you about pornography.”

To say the air instantly bristled with discomfort is an understatement.

First of all, I was raised by the generation that believed if you don’t say something it won’t happen.

You didn’t talk to kids about “sex” back in the day because you didn’t want to put the idea in your child’s head!

If you didn’t, having sex wouldn’t occur to them until they were safely married at age twenty-two.

Then you had to swiftly do an about-face and explain “what fits where” in order to have a grandchild.

My daughters are 12 and 13, around the same age I was when my friend Anastasia showed me her mother’s (a divorcée it should be noted) collection of pornographic magazines.

(We have parent controls installed on our kids’ technology, but they could hack them fairly easily if they wanted to.)

Still, according to this article, they will not be immune to its affects as it’s highly likely boys they date in high school and college will be steady consumers.

(When I typed the word “tweens” into Shutterstock to find some photographs for this story, these are the images that popped up! What the heck?!)

I felt it best I read the “Sex Before Kissing” article to them aloud, so it would not be a conversation about sexual morality, rather a confab about sexual and emotional safety from a non-parent source.

It gave us a starting point with which to discuss the potentially embarrassing topic.

“Have any of your male friends asked you to send them nude photographs of yourself?” I asked (the article mentioned this was quite common as early as middle school!)

The answer was a resounding ‘no.’

These are the bullet points I offered my daughters. I explained:

Once I finished my speechifying, which normally annoys them, I was surprised they wanted to discuss the topic further.

When it comes to ‘actual’ sexual activity, they were both certain some kids in their school might be dabbling, but they imagined the number to be quite low and have never heard of girls being sexually bullied on or offline at their campus.

This was all very reassuring for the time being.

But I’ve become aware pornography isn’t going away, it’s a problem and we parents have to be willing to discuss it, not just with our daughters, but with our sons as well.

To quote the philosophy of Fight the New Drug (which published the article):

“Our generation is the first to deal with the issue of pornography to this intensity and scale (…) if we don’t take a stand, the problem is only going to get worse and worse.

“By being informed and understanding porn’s harmful effects, we can make a much needed change to our perceptions about love, sex, and relationships.”

Have you talked to your kids about pornography? Parents of boys, have you noticed this to be a problem? And if so, how? To opt-in to Shannon’s newsletter, click HERE.

2 thoughts on “Talking To Kids About Pornography (7 Bullet Points)”