How Old Is Too Old To Rock It?

There is a 50+ woman online who out-sexes me by a mile.

I’m so thrilled to introduce you to Erica Jagger, a pseudonym evocative of the decadent, libidinous, licentious Glitter Rock era. Erica writes:

Recently I read the Yahoo article “Is 60 Too Old To Show Your Bra?,” inspired by a photo of Trudie Styler — age 60 — rocking it in a black ensemble.

Beneath her plunging neckline was a killer leather bra.

Her outfit was elegantly sexy, and to my eye, completely kosher for an evening out.

But when the writer, Yahoo editor-in-chief Joe Zee, passed the photo around to his fellow Yahoo-ians, half of them “cringed,” calling the flesh-baring top inappropriate.”

As in, inappropriate for an older woman.

The article didn’t say what the cut-off was for bra exposure. Forty? Forty-five?

And if it’s okay for a 40-year-old to reveal her bra, why is it not okay for a woman twenty years her senior?

Really? I thought, after finishing the piece.

Are we really so threatened by the idea that a post-menopausal woman could be proud of her body?

That she’s still sexually active — and in the case of Trudie Styler, tantrically sexually active? That she refuses to let the culture manage down her desires and beliefs about herself?

Where Did This Theory That Older Women Aren’t Sexy Come From?

Evolutionary biologists have theorized that men aren’t attracted to older women because they’re no longer fertile.

And that menopause evolved, so post-menopausal women could care for their grandchildren.

From a strictly procreative and utilitarian point-of-view, this makes sense. But it doesn’t make sense if a man isn’t looking to have children.

There’s a great line in the movie Moonstruck, where Olympia Dukakis, devastated by the fact that her husband is having an affair, asks a skirt-chasing middle-aged John Mahoney why men cheat. “Because they fear death,” was the answer.

Metaphorically, this may be true. And I think it’s also true for men who leave long-term marriages for women two and three decades their junior.

But this doesn’t mean their ex-wives are no longer inherently sexual.

It means that men want a life do-over, which will involve children if a younger woman wants them.

If men don’t want children, then, wouldn’t they be just as inclined to view older women as sexually desirable?

I don’t have the numbers to back up this argument, but from my own dating experience, I can give an unequivocal yes.

One reason men want me for a sex partner is that I won’t hit them up for a baby.

Another reason is that my life experience makes me attractive — to both younger men and men my age.

Probably half the men on OkCupid who contact me are younger, which blows up the notion that a woman old enough to be a grandmother isn’t sexy.

It’s 2014, Can’t We Stop Telling Older Women To Roll Over And Play Dead?

I really don’t understand why people collude with a misogynistic cultural message. I don’t know why it’s threatening to see an older woman rocking a revealing outfit, or to picture an older woman having sex.

Perhaps, men find a hot woman with life experience intimidating? Perhaps change is difficult, and if the zeitgeist is shifting towards a more realistic version of women’s sexuality, then people are forced to change what they think?

Of course, we shouldn’t presume that every woman of a certain age wants to “look sexy.”

I’ve gotten plenty of comments on my Huffington Post pieces from mid-life women who don’t want to be burdened by pressure to look a way that they don’t feel, who aren’t interested in sex, and who no longer care about what men think.

It is every woman’s prerogative to age in the way that’s right for her, and men’s opinions should have nothing to do with it.

But those of us who do want to dress in a way that showcases our physical attributes and our sexuality shouldn’t be expected to stop just because we’ve stopped menstruating.

I certainly don’t plan to divest my lingerie drawer of pearl thongs and corsets.

But I would like to stop reading insipid articles insinuating that sexy older women are too old to be sexy. Because the only time a woman shouldn’t rock it, is when she no longer wants to.

Are you one of the ubiquitous older sexy women who still rocks a leather bra and enjoys the company of younger men?

We’d certainly love to see your photos and stories in the comments. Maybe I’ll even pick one to publish. Onward ho! 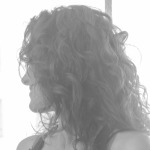 Erica Jagger is the pen name of a 52-year-old divorcee living in Los Angeles.

When her marriage ended after 20 years, she bought into our culture’s message that women over 40 are invisible to men, and wondered if she’d ever have a date again.