At first I thought Lena Dunham (the creator, director and star of HBO’s Girls) was fat.

I thought her breasts were underachievers. Her belly, with all of its flouting-the-zeitgeist rolls, made me a little uncomfortable.

From there, Lena’s litany of nudity crimes piled up: she had no discernible musculature beneath her pale flesh. Her thighs and butt were round and dimpled. Her teeth were crooked. Her hair was thinnish. Her lips weren’t bee stung. Her soft shoulders were besmirched by indecipherable tattoos.

What, as a television viewer, was I supposed to do with this body?

I started to admire Lena Dunham. Here was a woman eating, drinking, bathing, making love, shaving, sexting and just just plain lying around in her naked, average body for all the world to see and compare to the insidious Gwyneth Paltrow’s post-baby six-pack you could play zydeco on.

I decided Lena Dunham not only sports the “11 extra pounds” her character Hannah bemoans, but she also has a cast iron set of balls.

By the end of season one, I was a Dunham acolyte. Then season two of Girls began.

In the opening episode, Hannah is torn between two lovers, bounding from one apartment to the next.

There’s a scene in the middle where she changes her dress in her bedroom and we’re treated to some side boob.

I realized I was no longer uncomfortable gazing at Lena’s small, friendly breasts. They’d become familiar to me. Like mischievous cousins who mooned me from time to time.

I didn’t really notice the gently rolling hillocks of flesh on her belly. I didn’t look for definition in her biceps. I didn’t even think about what she should do to shape up, because, I don’t know, she was starting to look, well, comely.

Then it happened. My Beauty Paradigm did a complete 180.

At the end of season two, episode one Hannah picks the lover she wants to keep.  She knocks on the door of his apartment. He lets her in and goes to get something. Without missing a beat Hannah disrobes with her back to the camera.

I caught my breath.

Her skin was opalescent, not Nosferatu-like. Her curves were deeply feminine, not fat. And Dunham’s utter lack of self-consiousness didn’t seem delusional, or political, or revolutionary.

Instead, it felt hopeful. As if Dunham is single-handedly ushering in a new era where women don’t hate themselves.

Turns out Lena Dunham is beautiful. It’s just been a very long time since I’ve seen her kind of beauty on display.

I leave you with Renoir’s Bathers, round soft beauties from a kinder time. 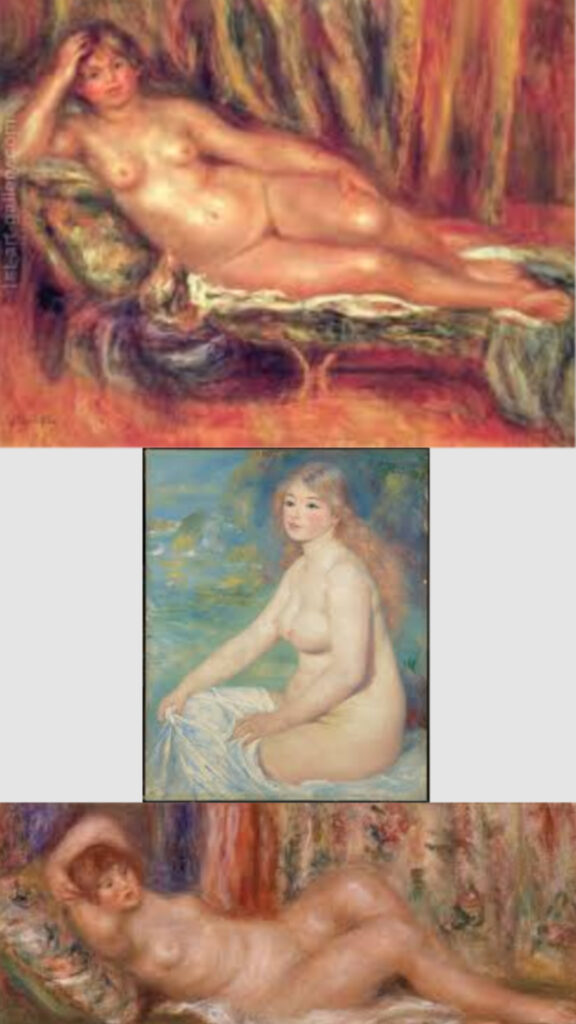