One Simple Practice to Cut Through a Lifetime of Pain

If you’re anxious, depressed, have a Monkey Mind, worry you’re not using the Law of Attraction correctly and are sending the Wrong Fucking Energy out into The Universe so you’ll only attract Troglodytes and Bell’s Palsy — this post is for you.

A family member — whose approval I’ve sought most of my life — isn’t currently speaking to me for reasons I won’t get into. (No, I won’t say who he is … it’s my dad.)

At my age, I intellectually understand I’m fine without him or his approval. But my unconscious brain’s childhood wound is triggered and I’ve been acting out by:

It could be worse; I could be betting the nest egg in Vegas, eating tins of foie gras and running off with Scientologists; but anxiety, anger, shame and hurt are making me their bitch.

As a Twelve-Step practitioner I’ve tried prayer to get over this hump, but avoided meditation (also recommended) like the plague.

The idea of sitting still and “watching my thoughts drift by on clouds” makes me want to prowl Pret a Porter to buy the perfect, fur-lined 2K Mackintosh hooded poncho, even though it’s 90 degrees where I live — or eat a trough of chocolate.

Meditation remained elusive until I attended a “Breathwork” class with Nathaniel V. Dust. (This is not a sponsored post; I had a free introductory session and am paying cold hard cash for more.)

“Breathwork” turned out to be a form of meditation I could get into because there’s “work” involved that actually gets me past my busy brain to the primal shit.

I trusted Nathaniel on sight because he’s a really spiffy dresser, reminiscent of my favorite film writer/director Wes Anderson …

I also trusted Nathaniel because he exudes a percolating humor; an unpatronizing empathy and a sense of the absurd which, when you’re breathing so hard your hands turn into claws and your face into a gargoyle mask, is really helpful.

It took a google search to discover Nathaniel credits “Breathwork” with helping him beat drug and alcohol addiction. But even before my research, I could tell he was the kind of healer who walks the walk.

But first, what is Breathwork Meditation?

In Psychology Today,Nathaniel describes it thusly:

“Breathwork is a simple (not easy) practice; a two-stage breath technique that essentially gives the mind something with which to occupy itself and tricks it into shutting up for a few minutes.

“In that short period of time, the brain calms and allows us to experience what it’s like to be connected; connected to the most intimate parts of ourselves.

“Emotions that have been suppressed for years begin to stir and we get the chance to process and heal old trauma, finally giving us a sense of safety that we’ve never experienced before.”

I first worked with Nathaniel in a group setting and was so shocked by the results; a flood of emotions coming up and out of my body; self-forgiveness and forgiveness for others flooding into my body; and an uncynical connection with — for lack of a better word — God.

I was so inspired by the group sessions, and specifically by the way Nathaniel runs them, that I decided to have a private session with him in the hopes of healing my current pain stemming from that childhood wound of never feeling like I was enough.

Because Nathaniel and I are both so busy, our session was at 8 a.m. on a Saturday morning.

I wore pajamas that I pretended were sweats. He wore what you see below. Minus the fire. I think you can sense the percolating humor. 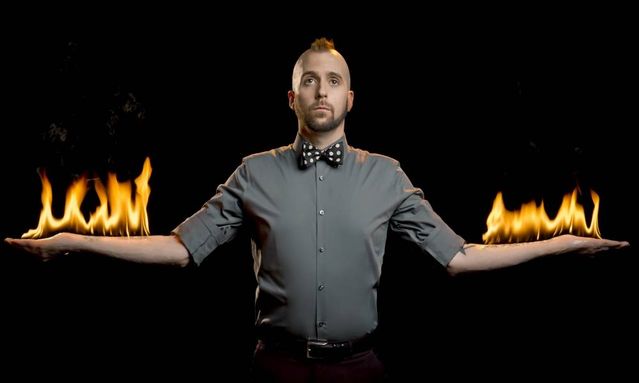 What happened instead — with Nathaniel’s kind, gentle guidance — was I met my Inner Child.

I’ve decided he’s a boy, his name is Luke, and he’s about 8. Oddly, it makes sense to me. I recognized for the first time that Luke is my creativity. The source my writing comes from.

To keep him going I have to feed him sugar, give him wine and buy him a bunch of clothes he has nowhere to wear.

As this realization emerged, I was filled with this deep sense of calm. It felt — in that moment — that it was safe to stop lashing Luke. That I could let him rest. That he doesn’t have any-fucking-thing to prove.

I even had a few ideas about what Luke would really like to do.

I realized, if I could let Luke do some of these things some of the time, he’d be happy to provide me with his vast store of creativity — and that kid is unbelievably creative.

Full of all kinds of novelty and invention, innovation and ideas. And he’s really funny.

What also came up in my session with Nathaniel was GRATITUDE of all things!

Me? Grateful? Are you crazy?

Yes, suddenly I was grateful for the people coming into my writing life; the producers on a small film I wrote years ago that might see the light of day; new agents that want to send my work out; gate keepers that want to open the gate for me.

In the past, whenever my work collided with commerce I felt defensive, guarded — just waiting for the fuckery that was sure to follow.

There had to be a price to pay for letting my guard down, liking people and being happy! I still feel that way.

But when I was on the table, breathing my way past my brain with Nathaniel gently holding space for what I considered to be a volcano of feelings and fears, it seemed possible I might be able to safely hold joy.

I’ll be going back to Nathaniel. I highly recommend you check him out and see if you can attend one of his workshops or book a private session.

If he’s not in your area I’d also recommend you check out Breathwork and find out if it’s something that can help you on your human journey.

Heaven knows we all deserve a little help sometimes. xo S Be sure to follow Nathaniel on his Instagram @nathanielvdust