What do Chrissie Hynde, Sexual Consent and a Cup of Tea Have in Common? 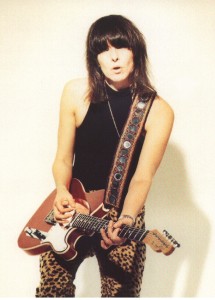 I’ve always seen Chrissie Hynde as a feminist badass. A woman who circumnavigated some of the land mines we often trip; valuing ourselves based solely on our appearance and/or sexual desirability. Abdicating our power to men.

So, along with many other women, I was disturbed when I read her interview in last month’s London’s The Sunday Times where she took “full responsibility” for her own rape, which occurred during the time she was a 21-year-old student at Kent State.

Hynde, who was promoting her new autobiography Reckless said:

“If you don’t want to entice a rapist, don’t wear high heels so you can’t run from him. If you’re wearing something that says ‘Come and f— me’, you’d better be good on your feet.”

She went on to say:

“If I’m walking around and I’m very modestly dressed and I’m keeping to myself and someone attacks me, then I’d say that’s his fault. But if I’m putting it about and being provocative, then you are enticing someone who’s already unhinged — don’t do that.”

Needless to say, there’s been a massive backlash from anti-rape groups.

“This feeling of self-blame, described by Chrissie Hynde, can often prevent survivors from coming forward and getting the support that they deserve. Regardless of the circumstances surrounding a sexual assault, a victim is never to blame. The responsibility always lies solely with the perpetrator, no matter what.”

I absolutely agree with the RAINN spokeswoman and disagree with Hynde’s wholesale acceptance of blame for her rape, because she wore provocative clothing, was high on drugs and took off with a member of a motorcycle gang. But I do think there is a filament of thread connecting the two.

When I was a student abroad in 1986, I suffered an attempted rape. I was fortunate, after a protracted struggle, to escape my attacker. Intellectually, I understood that he had absolutely no right to do what he did to me. But, emotionally I felt culpable. Because I did stay on a deserted beach with a boy I didn’t know after my friends left. I did drink alcohol and become mildly intoxicated. And I did want him to kiss me.

I think the point Hynde is trying to make (albeit ineffectively) is that women have to take responsibility for keeping themselves out of potentially dangerous situations.

Rapists don’t follow rules and we don’t live in Utopia.

In an attempt to simplify a complex topic, I like to think of Rape in terms of Before, During and After.

I recognize this is a controversial point of view.

This does not mean she shouldn’t report the crime to the authorities. This does not mean a jury should slut-shame her and find a rapist not-guilty because the woman was wearing a mini-skirt and high on drugs. All it means is that we (women) shouldn’t throw the baby out with the bathwater, putting ourselves in precarious situations because rape isn’t our fault.

And for men who call women “cock teases” or feel they’re owed something because a woman is dressed provocatively, or is flirtatious or allows some form of sexual activity, here’s a genius video — using a cup of tea — that will help simplify what constitutes SEXUAL CONSENT.