The Bull and The Beehives aka Hawaii Big Island 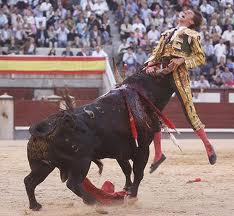 “If we’re lucky we might get to see The Bull!” Uncle Robbie says.

When he says this Clare and I are standing in a field of six-foot high elephant grass a stone’s throw from my brother’s backyard on The Big Island!

Which makes it seem exotic and a lot more interesting than the field with the feral cats and the deserted train tracks at our local Palms Park Rec Center in L.A.

And the feral cats are only visible at midnight during a Wiccan ceremony infused with incense and Botox. Which means I’ve never seen a feral cat there or anything even remotely WILD.

“The Bull?” Clare and I squeak.

The Bull wouldn’t charge us??

Clare begins to hyperventilate and sweat. My hackles stand on end, sniffing the air for Bull Manure.

“Yuh huh, you are joking about The Bull?”

“Yuh huh there is a bull,” he smiles. Why is he smiling if there’s a bull?

Clare is pale and shaking. She’s 9. But I don’t want Uncle Robbie to think I’m raising a bunch of citified pussies. So onward we forge into potential Goredom.

I quietly reassure Clare that The Bull is probably like that bull in the kid-book Fernando, where a young boy pulls a thorn from Fenando-the-Bull’s hoof.

So when the boy becomes a Matador and is supposed to slay Fernando in the ring he realizes he can’t, because this is his very own Fernando.

The bull remembers him too and licks him with his Bull Tongue and the Boy Matador puts away his Bull Sword and he and Fernando hug each other and put flowers behind each other’s ears or something.

But while I attempt to soothe Clare I’m secretly strategizing all the ways I can save her from The Bull or just make a run for it myself.

Sure I’m peri-menopausal and my husband’s had a vasectomy, but I could still pop out a couple of kids somehow, right? Modern medicine’s on my side.

After both Clare and I lose all our hair due to stress-induced Alopecia, Uncle Robbie leads us away from Bull Territory and into a thicket lousy with Beehives.

They look like miniature Bee Condos where thousands, if not millions of industrious little Worker Bees are lavishing the Queens with regurgitated honey while the Queens order them beheaded between manicures and vaginal rejuvenation.

Then Uncle Robbie decides he should lift the roof off one of these beehive condos so Clare and I can see the honeycombs.

If he lifts it just “ever-so-gently” the bees won’t swarm us.

They won’t swarm us??! I literally hear Clare’s puberty cycle delayed by ten years due to abject terror. She’ll start ovulating when she’s 60 and I’ve been catapulted into Alzheimer’s at the delicate age of … oh you know the rest.

We survive The Bees and never do see The Bull, however I’m later informed by Aunt Mary that just one of The Bull’s testicles is the size of my entire head.

And I have an extremely large head.

My head could eat Harry’s head for dinner and not even need to floss. My big head is either indicative of freakish intelligence or the possibility I’m only two generations removed from the Cro-Magnon man.

Despite our near-death experience with The Bull and The Bees, I feel annoyed I’ve waited so long to visit my Hawaiian family.

They usually come to California to see us and we never have the opportunity to stretch past our pedestrian circumstances into the natural world.

Don’t get me wrong, my Hawaiian family have computers, smart phones, WiFi, PX90 and Justin Bieber too, but they’ve put it all away and are living like tourists to show us what they love about their home and what drew them here in the first place.