The #1 Killer of Married Sex

The #1 Killer of Married Sex is … Teenagers.

They put the kibosh on romance because they have the hearing of Doberman crime dogs; they can hear a mouse fart through your dense plaster and lathe walls. The thought of you and their father having sex makes them want to projectile vomit. You’re not allowed to hug or kiss or even give each other shoulder hugs in public.

Because this is mortifying. People are watching! Also, it’s gross.

They won’t watch an episode of Friends with their father in the room (they’re girls). He must leave and you MUST NOT use the show as a “teaching moment.” You need to stop explaining that if Joey had as many one-night stands as he’s supposed to be having he’d be imprisoned for overdue child support unless one of his baby-mamas ran him over with her Sienna minivan first.

At night your husband serves as your teddy bear. Because you’re both chubbier than you should be.

You eat too much cheese, chocolate and ice cream because life is too structured, which is good for your teenagers, not so good for you.

You can’t just run off to Sri Lanka, spending your days filming a documentary on the knitwear sweat factories while visiting opium dens in the evening.

You have to drive your children to fencing lessons, to Jeet Kune Do, to the orthodontist where you’ll pay for their straight teeth in the blood of your fathers.

You looked at your husband today, not one foot from you, and you thought, “Man, I miss that guy.”

He’s right there. But you miss him.

You miss being alone with him. You miss talking to him about how Murnau’s Sunrise was boring as shit and exclaiming that the UCLA film and television department has to stop screening it.

You think they should screen Bridesmaids instead. Screw film history! You’d rather dine with Trump than sit through Last Year at Marienbad again.

Oh, the liveliness of this conversation, that would certainly lead to sex.

You have friends with teenagers who seem to be really attempting to keep sex alive. You know this because you used their bathroom today. And as you sat, contemplating their Oaxacan tile, you noticed the latest edition of The Economist sitting in their toilet magazine rack. 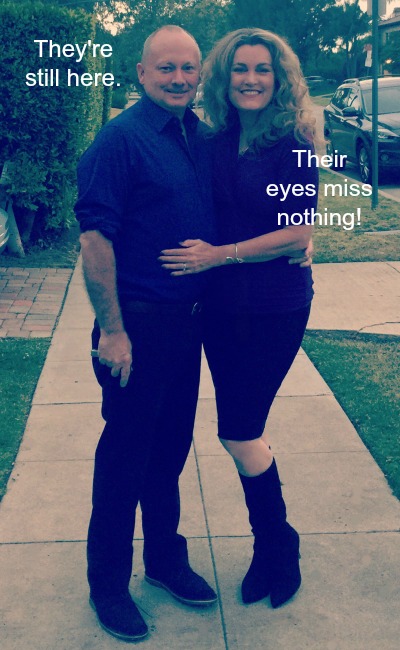 This means they’re still interesting! They’re still aware of what’s happening in the outside world and probably discuss it when they come up for air from fellacio.

You don’t read The Economist.

The other night these words actually issued from your thinning lips:

“I just don’t trust Jordan. Just look at that Haircut. It has ‘cheater’ written all over it. Also, he has knock-knees.”

You know the names of all of the other bachelors on The Bachelorette, despite the fact they all seem to have the same hairdresser, manicurist and genital groomer.

You think about the fact that human beings are the only animals who keep their young this long.

Granted, elephants are pregnant for 22-months and give birth to 250 lb. babies. So there’s that. But they only keep them for a couple of years.

You don’t necessarily want your teenagers to leave. At least … not permanently. You love them. But you’d like them to live with you two weeks on, two weeks off. Perhaps, you realize, this is why people get divorced?

You don’t want to get divorced.

You’d just like your teenagers to occasionally live a few blocks away with Julie Andrews, who’d keep them wearing clean drapes and singing Edelweiss while you and their father could have one of your former “hospital days.” This isn’t as geriatric as it sounds. A “hospital day” meant unplugging from the outside world and not getting out of bed all day.

This included sleeping, watching “When Harry Met Sally” (you) and “Stalingrad” (him), making love, eating the Trader Joe’s mozzarella-prosciutto roll (you), Captain Crunch cereal (him), napping, giving back rubs which led to making love, reading Wired (him) The Enquirer (you), sipping tea (him), quaffing Prosecco (you) and drifting off to sleep in each other’s relaxed embrace.

You worry the next time you take a “hospital day” together it will be in an actual hospital.

Sometimes you do THIS and THIS to fight The Man (aka Teenagers). But usually you’re treading water as fast as you can.

Married Ninjas: How do you keep things thriving in the sack with teenagers guarding The Wall? xo S

If you enjoyed this article you’ll thoroughly enjoy my book: Married Sex: Fact & Fiction. Don’t miss a thing by opting in to my newsletter here.