I want your child to come to our neighborhood middle school, Emerson Community Charter.

So there’s my agenda right out there in the open. And part of getting you to do that is convincing you that Emerson middle school is perfect.

But the fact is, it isn’t perfect. Things go wrong sometimes and invariably they go wrong when we’re giving prospective families tours of our school.

That’s when something green and gelatinous will ooze out from under the door of the science lab, or the school emergency alarm will blare unexpectedly and for no reason at all, or one hundred towering 8th graders will burst from their classrooms; talking and laughing in the maniacal pitch of children at the peak of puberty running amok, some breaking the rules and sliding down the stair bannisters.

And we parent-recruiters shudder inside, because we know the concerns of prospective families.

2. Most prospective families from our neighborhood are caucasian and Emerson currently skews black and Hispanic.

3. Most prospective families from our neighborhood are upper-middle-class, while Emerson skews middle to lower-middle class.

4. The school building is a historically-preserved treasure, but doesn’t read new and high-tech.

All of this is true. But these are some of the very reasons I love our imperfect middle school so much.

My daughter is in the SAS program at Emerson.

She was classified as gifted in her elementary school, but my bright daughter has never worked harder or cared more about impressing her teachers than she has at Emerson middle school.

This is incredibly difficult for kids my daughter’s age because they’ve learned math a specific way for their entire educational careers and now, at 12, they literally have to change the way their brains work when it comes to math.

Initial test scores last semester were brutal. Children who normally score As and Bs in math were pulling in Cs and Ds.

Ms. Shanley staged a parent meeting where she reassured parents and explained that this is a transitional year, that we have to worry less about our children’s grades and more about their learning and understanding as the year progresses.

Then Ms. Shanley made herself available for tutoring during nutrition and lunch on a daily basis to help any children who were struggling.

She also brought in teacher’s assistants from the UCLA math program to facilitate.

Many of the students improved and began getting As again. Those students also volunteered to tutor their fellow classmates during nutrition and lunch.

Ms. Shanley posted homework every night online and made herself available to return emails in real time when children had questions during their homework after school hours.

Then Ms. Shanley (and all the other teachers at Emerson) sent us grade reports every 5 weeks with a complete breakdown of our children’s test and homework scores, so we could know exactly how our child is progressing in each class and what homework they didn’t turn in.

My daughter’s math grades at the beginning of the semester were consistently Ds.

With support at school, a great deal of hard work and a desire to impress Ms. Shanley she brought her final grade up to a B.

I’ve never been more proud of my daughter. She developed stellar work habits and an incredible homework network where she face-timed classmates and they worked on their homework together.

My daughter has been academically challenged in her other SAS classes as well, participating for the first time in debate team, thanks to her 7th grade English teacher, Mrs. Parker.

Next year, in 8th grade, she’ll be expected to write a novel.

Suffice to say, regardless of the Great Schools score, my daughter is working very hard academically at Emerson.

We know there have been one or two teachers she hasn’t loved and I’m sure in some cases the feeling was mutual.

But this is Life.

But she’ll have to learn to cope with the multitude of personalities she comes into contact with throughout her life.

And, interestingly, one teacher she initially poo-pooed has become her favorite teacher, which I think was humbling for her, and brought her to a new level of awareness and maturity.

Lastly, my youngest daughter also tested highly gifted in language arts and humanities and there was some concern at our elementary school that she wouldn’t be challenged at Emerson when she starts 6th grade next year.

I wrote directly to her soon-to-be 6th grade English/History teacher, Ms. Graham, who assured me that if my daughter isn’t challenged enough (which, my eldest daughter reminded me, remains to be seen) that Ms. Graham will develop an independent study program to keep my child engaged and learning. That just blew me away.

I’ve written frequently about White Flight and race on my blog to the exclusion of academic concerns, and I’m sure it ticked some people off, so forgive me in advance.

But I do feel race plays some part in intimidating some community families from supporting the neighborhood school.

No one, of any race, loves having their child in the minority at school.

The worry is that their child won’t be accepted, might be bullied or somehow go to the Dark Side.

What I’ve found is that my child gravitates toward like-minded children, regardless of culture or race.

And, in fact, has never found so many children she enjoys, sometimes to my chagrin.

A few weeks ago, I picked her up from school and the instant her butt was in the carseat she started texting her friends.

I asked the age-old question that every parent asks their child in middle school, “Didn’t you just see your friends at school? Do you really need to be in constant contact?”

To which my daughter replied, “Well, mom, there are 75 kids in the 7th grade at Emerson and I’m friends with all of them.”

What could I say to that?

In my opinion, my eldest is a bit of a misanthrope. She loves her alone time. She loves being invited to parties, but doesn’t really love going to them.

Yet she’s friends with each child in her grade level?

She’s also eager to learn Spanish. She now frequently texts me in Spanish thanks to her friend, Monica.

Which leads me to believe, that for this generation, we could eradicate RACE AS AN ISSUE!

Think about that. What if we could break the continuing generational paradigm of social and economic Apartheid simply by supporting our local middle school?

I think all of our children would benefit from that.

I’m not a PollyAnna. I’m sure there are some troubled kids at Emerson.

I don’t personally know of any and my daughter hasn’t had issues with any. But the fact is, there are troubled children in every school, regardless of demographics.

If our luck holds, we’ll continue to be an upper middle class family.

Our children have been fortunate to have whatever they need; clothes, food, a good home and electronics, for better or worse.

And they’ve been incredibly lucky to also have what they want. They’ve traveled all over the world with us, from Africa, to Ireland, to England and more.

They’ve been lucky to get to go to movies and the theater, the ballet and the orchestra. And if they really want something badly, they know they can do work around the house to earn it.

Some of the kids my daughter knows at Emerson don’t have these luxuries.

And it may be that some of the kids at Emerson don’t even have some of the necessities. This is another reason I want our neighborhood to support the local middle school.

Because for every child that attends Emerson, more money will be funneled to the school for things like state-of-the-art computers and electronics, better sports equipment, free lunches and more. (Emerson already serves a free, and healthy, breakfast).

Emerson was designed by Richard Neutra in the International Style of Architecture, and built between 1937 and 1938 and it’s gorgeous.

One pitfall to an older building? The drinking fountains inside the building suck. They pretty much trickle.

There, I said it. Your child is going to need to bring water or buy it from the student store.

Having said that, the architecture is stunning, and Emerson is finally getting a new state-of-the-art gymnasium that’s set to open in the fall of this year.

Not to mention over 20 million dollars of updates to the track-and-field and outdoor areas.

Your children will be coming to a new, fancy schmancy campus that still retains its aesthetic charm.

Emerson has students from all over the world and some of them are refugees from places like Iraq and Somalia.

To that end, this year the 7th grade English teacher, Mrs. Parker, and school principal Dimone Watson (incredible principal BTW – reminiscent of our beloved Judy Utvitch), brought aid workers in to stage a Sudanese refugee camp in our main courtyard.

Students played both refugees and aid-workers to have an interactive experience, learning about what’s going on outside of their little bubble.

I was blown away by the concept and the execution.

My daughter has had field trips to Yosemite, Catalina Island, The Science Center downtown, both Getty museums and more.

But her favorite was a field trip with her Robotics class (taught by MIT grad, Mr. Ezell) racing go-carts to learn about torque, center of gravity and calculating velocity.

(I wanted to go, but unfortunately am not a student at Emerson).

And there’s more: an incredible new cheerleading squad at Emerson thanks to Ms. Smart (who has the energy of a Viking warrior); the storied drama-program led by Ms. Graham (Shakespeare in the quad is my favorite); along with chorus, costume-design and an incredible sports program that’s dominating the state of California. 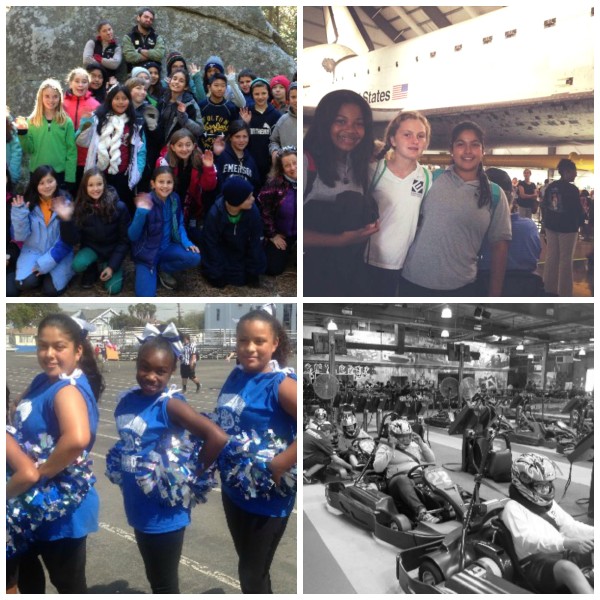 But what school is? And their arms are open wide for parents who want to come in and make a difference.

I’ve only asked to bring two things to the school and both were accepted by Mr. Watson and the hilarious Ms. Muckenthaler (our vice principal); I brought professional coaches to teach the Leadership children Mindfulness (which is all the rage these days) and I’ve also been a liaison with the LAPD to have officers come in to speak to our children about drugs.

Jeremy Bollinger, who is the beating heart and soul of Emerson, and his beautiful, whip smart wife Michelle, have revolutionized what’s possible on our campus.

They’ve contributed in too many ways to list, but I was witness to one of their projects, which was bringing 10-20 CAA (Creative Artists Agency) up-and-coming agents to volunteer in our Reading Program for reading-challenged or English-as-a-second-language students.

Anything is possible at Emerson, if you want to make it happen. Anything.

3 thoughts on “Advocating for Public Education”