“Dear White Moms” is a Must Read

Racism: a belief that race is the primary determinant of human traits and capacities and that racial differences produce an inherent superiority of a particular race. — Merriam Webster Dictionary

No one wants to admit they’re racist. But I believe we’re all racist to varying degrees.

Human beings tend to fear what is different and react to those fears across a broad spectrum of behavior. Some of it benign, some of it deadly.

In her post “Dear White Moms” African-American author, Kesha Beckford, has made me uncomfortably aware of my own benign racism.

I don’t actively participate in racist oppression, but I also don’t step up to exact healing and positive change.

Beckford is the mother of a young son and her post is a reaction to the recent shooting death-by-cop of the unarmed young black man, Michael Brown.

She vulnerably and adamantly reaches out to white moms asking them to do more to protect black sons; to advocate for them with their families, friends, communities and police departments.

She reminds white mothers that her child is no different from ours, except for the fact that when he reaches young manhood he’ll be more vulnerable to prison and death-by-police than our grown white sons.

She writes to some of her white blogging friends: 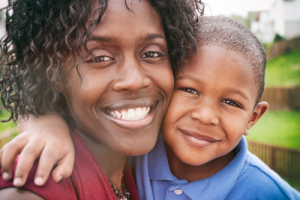 “I know you’re on my side, with all those posts about how (you) don’t have to worry about ‘(your) blond haired blue eyed son’ being shot by the police. I get it, you’re not boasting, just stating the sad facts, that you understand on the deepest level that your white privilege means your motherhood is different from mine.”

She’s dead on. Our white privilege does mean our motherhood is different than hers in ways we white mothers will never fully comprehend.

It’s up to us to stop being complacent and care more about the fates of other peoples’ children.

How can we live without fear if we continue to avoid and deny the racial divide and vilification of young black men in our society?

My white daughter attends a public middle school that is predominantly black and hispanic.

Coming from her mostly white elementary school, I wondered how she would metabolize this change and was surprised when it was hardly a blip on her radar.

It turns out,  I’m the one who is changing.

Because I’m frequently on campus for volunteer opportunities, I spend more time than I’ve ever spent with black and Hispanic children, who I’ve learned, through personal interaction, are no different than my daughter.

Can’t we, white mothers and fathers, treat these black children the way we treat our own?

Can’t we advocate for them? Can’t we reserve judgment until we’ve had the opportunity to get to know who they are as individuals? Can’t we talk to them, spend time with them and actively get to know them?

Because they are our children too. Our boys. Our daughters. Our future.

There are statistics that tell us black males make up the largest portion of the prison population and that black students are more frequently incarcerated than white students.

But we don’t know the actual human beings and the stories behind the statistics; how many of these men are behind bars due to ongoing racial profiling and the hopelessness, anger and disaffection that comes from generational poverty and exclusion.

Journalist Ta-Nehisi Coates wrote an excellent article in The Atlantic titled, “The Case for Reparations:

“Two hundred fifty years of slavery. Ninety years of Jim Crow. Sixty years of separate, but equal. Thirty-five years of racist housing policy. Until we reckon with our compounding moral debts, America will never be whole.”

It’s a daunting treatise on why the African-American community is still suffering economic Apartheid in our country.

In her post, Beckford asks us to “read (to our families) about slavery and Jim Crow and the Civil Rights movement. Talk about how racism isn’t history, it’s now.”

As I said in the beginning, no one wants to be called a racist. But I believe we’re all racist to varying degrees.

So, until we can look deeply at our consciously and unconsciously held beliefs; until we can accept that racism is an integral part of what it means to be human; and that we should acknowledge our own racism to evolve and overcome it; things will continue as they are.

No mother of any race should have to fear for her son’s life based on the color of his skin.

3 thoughts on ““Dear White Moms” is a Must Read”