When I met Stephanie, a self-described Empath and Healer, in Boulder, Colorado to interview her for our Love Your Body Now Project: Healing Body Image Issues Through Fine Art Nudes, I was expecting a fruit loop. I had prejudices against people who use terminology like “spirit guide” and “energy exchange.”

Instead, I was blown away by this 29-year old woman’s poise, grounded-ness and the courage it took to begin her journey back to Self after battling Hidradenitis Suppurativa and body shame for years — this project being just one stepping stone along the way.

“When I first thought of the opportunity to be a participant,” says Stephanie, “I was excited and nervous all in one. The idea of being seen naked was a thought intertwined with shame and liberation.” 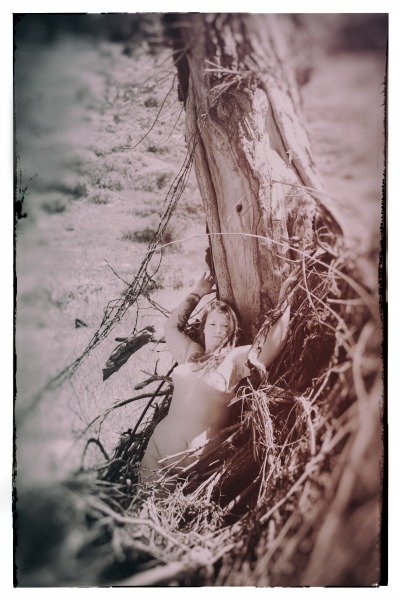 “The shame most likely comes from growing up in a religious household, where nudity and sexuality was rarely, if ever, expressed. Also, many of the women in my family have been concerned with their weight and appearance.

“For example, my mother is a twin. She and her sister are two of the most beautiful women I have ever seen. Yet, not a day went by as a child, that I didn’t hear them talking about their new diet. There has always been body-shaming readily available throughout my life from family, to friends, to social networks.

“Due to the religious paradigm … my physical body became a vessel for every emotional and mental pain I could hide. In the three years prior to my wedding, I gained 100 pounds of pure mental anguish and emotional denial.”

While Stephanie did what she could to be true to herself inside the family construct, her body began to rebel.

In her early 20s, she developed a disease called Hidradenitis Suppurativa (HS for short).

“For me, the HS was just a physical manifestation of my hiding, disgust and shame,” says Stephanie.

The HS has left scars and lesions under her arms and breasts, and persisted after she met and married her husband.

“HS people who aren’t already in relationships, find it difficult to begin new relationships, because of what other people will think,” says Stephanie.

So, it was difficult when her husband didn’t want to touch her, as if she might be somehow contagious. (HS is not contagious).

After a year and a half of marriage, Stephanie discovered her husband was having an affair.

When she filed papers for a divorce, she was shocked to discover her husband had already filed separation papers a year prior without telling her.

The end of her marriage is what finally broke her open.

“I kept having intuitive hits on the relationship, it was a fuzzy time. I had so much going on energetically, and my body was acting out. It wasn’t until (the affair) was shoved in my face that I had to look.”

After her divorce, Stephanie felt like she had two choices.

“I could either drink and whore myself out for the rest of my life, or I could get up, get angry, cry and figure out why this happened.”

She chose the latter.

Stephanie moved cross-country to Colorado in order to be “as far away from human hands as possible. I wanted to be as completely in Nature as I could.”

As she began to emotionally heal, her HS ratcheted down and she shed the 100 lbs. she gained leading up to and during her marriage.

She says she didn’t change her eating or exercise habits. She felt the weight loss was in direct proportion to her emotional health.

In talking to Stephanie, I realized that Nature is a powerful and recurrent theme in her recovery.

“As a child, I loved being outside by myself with the honeysuckle and tall grass. Through this project (#LYBN) I reconnected with so many aspects of myself that the healing could not be explained in just one article.

“With the opportunity offered by (photographer) Beth Sanders and (body centered coach) Marlene Zaleznick, I realized I had a chance to express my truth, express my child self and validate my beauty apart from any other person’s thoughts.

“I am grateful for this experience to see myself, and be seen for myself. The photo shoot is an expression of who I am now. This is how I am expressing my blossoming.”

After the shoot, Stephanie says of her photographs:

“To me it was interesting to see how far I’ve come, and see how much I’m still protecting. I lost 100 lbs. I see what I’ve let go of. I see that I have more to let go of. The weight protected me. It still does.”

But slowly, Stephanie will continue down the path of emotional and spiritual health with her body following.

I think the best way to end Stephanie’s story is in her own words as she writes about becoming rooted in a new, more authentic way.

“Beyond the valley of my childhood there is the dark forest. I step into the footprints left by my spirit, in a space of experience where time does not exist.

“My body is walked. Step by step my form becomes increasingly light, gracefully transparent. Moments have passed or maybe only one, before I find my self standing at the roots of eternity. I do not know how I know this except that I do.

“Of course. These are my roots. They dive deep into the Earth and come back up along the trails I have traveled. I did not know that this is where I began.

“I mistook the roots of childhood, marriage, and emancipation to be my true roots.  No, the ground I now stand firmly upon is the dwelling place of my truth.

22 thoughts on “Love Your Body Now: Healing from Hidradenitis Suppurativa”