He Answered the Door With a Gun 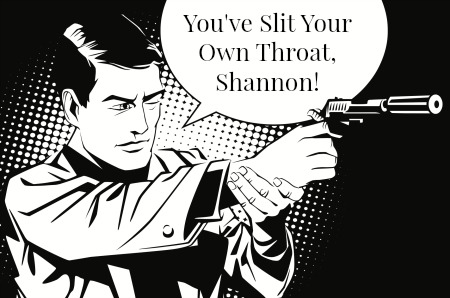 A Tale of Fathers and Daughters

The trouble began with Mike Sheridan.

He and I had never spoken. He was a grade older than me at Upland High and the only reason I was aware he existed was because I had to walk past the baseball diamond to get to the gym for volleyball practice after school. I surreptitiously ogled Mike Sheridan’s ass from its bent-over crouch in the infield. I had a deep admiration for the baseball-sculpted derriere, somehow more lean and elevated than its football kinsman.

Apparently, Mike must’ve taken note of my taking note of his buns, because on a Wednesday night around 9 p.m. he knocked on my front door.

My dad answered while cleaning a Smith & Wesson .22 caliber rifle.

As the story goes, (because all of this happened while I lip-synced Pat Benatar’s Heartbreaker into a hairbrush, unawares in my bedroom) Mike asked my dad if I was available.

Dad — who resembled Robert I-Dare-You-To-Knock-It-Off Conrad — took a long silent moment to consider, squinting casually down the barrel of his gun.

Then he looked Mike dead in the eye and said, “Don’t you think it’s a little … late?”

Mike fled. And word apparently got out because I was Homecoming Queen my senior year and no one asked me to the dance.

My parents arranged for a “family friend” to take me. I thought I was Boy Repellent until that fateful spring day, several months later, when Lance Schmitt took his life in his hands by jogging up to me on the quad and asking me to the prom.

I wept with both gratitude and relief as most of my friends had secured dates weeks earlier.
Imagine my chagrin, however, when my dad informed me that I had to be home from prom by 11 pm.

What fucking universe was I living in? Amish country? A Benedictine nunnery?

Lance returned me to my domicile at exactly 10:55 pm after the dance. I checked in with my dad like an ex-con would his parolee. Recalcitrant. Surly. Then hunkered down under my Holly Hobbie bedcovers steaming mad at my incarceration.

Suddenly, I heard a knock at my bedroom window. I lifted the curtain to see Lance standing there with a getaway car idling at the curb.

He wanted to know if I could slip away to join him in a hot tub and Jerry Rivera’s house?

I wasn’t a rule breaker, but after surviving in the arid desert that was my romantic life I yearned for hot water. I climbed out of my window, careful to camouflage the screen behind some juniper bushes at the side of the house and ran off with Vance.

What happened in the hot tub stays in the hot tub. Let’s just say I did not lose my virginity there, but the Kraken had been unleashed.

Lance parked his car a good half-mile from my house at 2 a.m. We alighted, both of us with sopping wet hair, me clutching my dripping bikini in my left fist. I felt sexy, beautiful, daring and free right up to the moment when I tried to open my bedroom window and it wouldn’t budge.

Someone had locked it. From the inside!

I glanced confusedly at Lance. This is when we both heard a deep and dreadful voice speaking from the shadows of the entryway. “Shannon,” the voice intoned like a judiciary ruling, “You’ve slit your own throat.”

It was my dad, the Kraken slayer.

I turned to warn Lance he’d better go, but he was already gone. The last thing I saw were the whites of his tennis shoes flying through the night, already halfway to his car.

It turns out, Lance’s tennis shoes were the last I’d ever see of him period.

He didn’t pick up his prom photos and disappeared from campus. I thought maybe he’d moved into the Witness Protection Program, but it turns out he did finish out his senior year, but somehow clung to the shadows each time I came into view.

Years later, when he ran into my sister at Chick’s Sporting Goods, he asked her to apologize to me for his behavior.

“It’s just,” he said, “Mike Sheridan told me about your dad’s gun.”

I always resented my father for destroying my early love life. That is, until my eldest daughter Clare turned fourteen.

She came home the other day with a “friend” from school named Zach.

“I don’t like that kid,” my husband grumbled, his eyes scrutinizing Zach as the boy dared to jump up and down, spin and flip on our outdoor trampoline.

“He’s got too much Game for a boy his age. He walks into our kitchen, opens our refrigerator without asking, shuffles things around, pulls stuff out and sniffs it, settles on a Coke, opens it, swigs it, then looks over at me, does the head nod and says, ‘Hey, Dude’.”

“Yeah, then the kid wanders into our younger daughter’s room, hangs out in there for a while, reappears to grab an apple on his way out to Clare, only this time when he gives me the head nod he says, ‘Hey, Man’.”

“What the fuck? So, what’re you going to do about it?”

“I figure when his mom comes to pick him up I’ll walk him to the front door and when he says,

I tell my husband he could get his point across without saying a word.

“Next time he comes over just start cleaning your gun.”

“I know where we can get one.”

Then I called my dad. I thanked him for being such a vigilant parent, the requisite badass.
Impermeable to flattery he responded, “Yeah, yeah, yeah, whatever.”

But I could tell he was pleased. Then told me I’d have to buy my own gun.

Do you have any fathers and daughters stories to share? I’d love to read them in the comments below. And if you liked this piece be sure to share it below! xo S

4 thoughts on “He Answered the Door With a Gun”