What Do Veterans and Stay-At-Home Moms Have in Common? 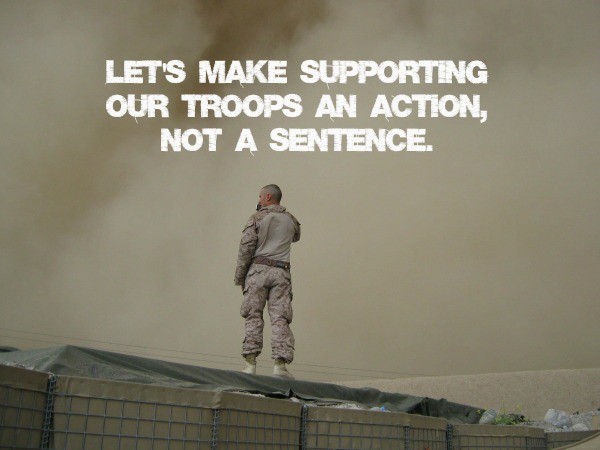 If you haven’t read former war correspondent Sebastian Junger’s latest piece in this month’s Vanity Fair, The Never-Ending War: The Bonds of Battle, get off of your ass and go get it.

Especially if you care about the veterans returning from Afghanistan and Iraq.

I’ve long had a passion for war literature and an interest in the psychology of men and women who put themselves on the front lines, both as journalists and soldiers.

But mostly because they do the dangerous things that need to be done that the rest of us won’t do.

So you can imagine my surprise when I, perhaps delusionally (?), drew a correlation between Junger’s exhaustively-researched theory about why returning war veterans struggle with PTSD (Post-Traumatic Stress Disorder) and why many new, stay-at-home moms suffer from post-partum depression.

This might be a bit of a stretch as I often moonlight as an assassin in a Walter Mitty-esque fashion. But I really think I’m on to something.

Citing comprehensive medical studies, Junger posits that it isn’t War Trauma that is most responsible for propelling veterans into PTSD, but the isolation they feel in the modern world once they return from the intimate, unfettered, intense realm of brotherhood achieved in-country.

Junger goes back in time, saying the movement from a hunter/gatherer society to an urban, industrialized society – specifically in the Northern European countries, which includes the U.S. – has had a destructive impact on humans due to displacement, not from a location, but from each other.

Any discussion of PTSD and its associated sense of alienation in society must address the fact that many soldiers find themselves missing the war after it’s over.

That troubling fact can be found in written accounts from war after war, country after country, century after century. Awkward as it is to say, part of the trauma of war seems to be giving it up. There are ancient human behaviors in war – loyalty, inter-reliance, cooperation – that typify good soldiering and can’t be easily found in modern society.

This jogged my memory of what it was like to be a new mother.

Finding myself suddenly stripped of closeness to former colleagues and the communal aspect of working toward a common goal, to find myself sitting alone on my living room couch with my baby.

I morphed from ambitious team player, to a gaseous, edgeless, flaccid milk machine and had no community with whom to share the experience or to help me succeed at raising this child.

Whatever the technological advances of modern society – and they are nearly miraculous – the individual lifestyles that those technologies spawn may be deeply brutalizing to the human spirit.

“You’ll have to be prepared to say we are not a good society – that we are an anti-human society,” anthropologist Sharon Abramowitz warned when (Junger) tried this theory out on her.

“We are not good to each other. Our tribalism is about an extremely narrow group of people: our children, our spouse, maybe our parents.

“Our society is alienating, technical, cold and mystifying. Our fundamental desire, as human beings, is to be close to other, and our society does not allow for that.”

This also resonated for me as first a stay-at-home, then work-at-home mom.

Instead of nurturing our children in a group, as early humans did, we seem to be pitted against one another, angling for our own children to excel, often at the expense of other people’s children.

We’re not raising our children as a collective village, rather alone, behind our closed doors, often in communities where we rarely see or speak to our own neighbors; especially in cities.

Junger writes that men deployed in the military are almost never alone.

They tend to travel in groups of 30-50 as did early hominids, working toward a common purpose.

Soldiers also sleep in large groups and feel a sense of safety being close to each other as did and do tribal communities.

This information makes me shake my head in despair at having thrust my babies into cribs in a different room when they were mere months old.

Numerous cross-cultural studies show that as affluence and urbanization rise in a given society, so do rates of depression, suicide and schizophrenia (along with health issues such as obesity and diabetes).

People in wealthy countries suffer unipolar depression at more than double the rate that they do in poor countries.

This again struck a chord.

I can think of at least twenty mothers I know personally who take anti-depressant medication, myself included.

And I’m sure there are many more I’m unaware of in my circle.

I reached out to Junger directly about drawing a correlation between the isolation that both vets and moms feel, and he graciously responded, writing that “studies show modern societies have a much higher rate of post-partum depression.”

With regards to the soldiers coming home, Junger had several excellent suggestions about what we can do as a society to help them transition.

Here’s one in which I’d be honored to participate:

We could emulate many tribal societies (…) by getting rid of parades and replacing them with some form of homecoming ceremony.

An almost universal component of these ceremonies is the dramatic retelling of combat experiences to the warrior’s community.

We could achieve that on Veteran’s Day by making every town and city hall in the country available to veterans who want to speak publicly about the war.

The vapid phrase, “I support the troops” would then mean actually showing up at your town hall every Veteran’s Day to hear these people out.

Some vets will be angry, some proud, and some will be crying so hard they can’t speak.

But a community ceremony like that would finally return the experience of war to our entire nation, rather than just leaving it to the people who fought.

As a citizen, I’m incredibly grateful to our troops, but having read this article realize I’m not doing enough and would absolutely like to support them in a more meaningful way.

Does anyone with political acumen know how to create a grassroots movement to enact Junger’s proposition?

And finally, what can we do for mothers (and dads) who find themselves isolated in, perhaps, one of the most important tasks any of us can undertake; the responsibility of raising the next generation?

All thoughts on this subject are welcomed.

3 thoughts on “What Do Veterans and Stay-At-Home Moms Have in Common?”