My Life as an Assassin

I didn’t realize when I woke up this morning, there was a price on my head.

I rolled out of bed, after the kids and Henry were off to school and work, slipping on my terrycloth robe and padding barefoot out into the kitchen to put the kettle on for coffee.

Just as I was stretching and rubbing the sleep from my eyes, I saw two shadowy, masked figures behind me; reflected in the stainless steel sheen of my kettle.

Casually, I opened the tea cupboard and gently reached inside to retrieve my Cocobo Nunchakus.

Before the two masked marauders knew what hit them, my nunchakus did!

Thwack! One blow across the brow, another in the gut. They were down for the count!

What I couldn’t know, was there were more assassins where they came from.

My former life, as a Jason Bourne-style CIA operative on ghost ops, had caught up with me to kick me in the ass.

Suddenly, Imagine Dragon’s Radioactive came on full-blast from some life-soundtrack in the ether, as bulky men swarmed my 1950s-style yellow tiled kitchen.

The villains surrounded me.

I glared fiercely into each one of their eyes, so they would remember the steely blue glint of my gaze, before they reaped the whirlwind.

I executed a series of Tate Zuki, Kizami Zuki and Nagashi Zuki attacks! (Just writing this made me crave sushi).

Quickly, I realized my terry cloth robe was a liability.

I slipped it off, whipped it into a noose, lassoed one unfortunate bad guy with a slender neck and, with one twist and jerk of the hands, and a Hazushi Waza throw to boot, I quickly dispatched him.

Using boning knives from my chopping block, and Chinese throwing stars tucked in the bread drawer, I managed to impale the remaining marauders while wearing nothing more than my  Sweet Briar Rose Houndstooth Plunging V-bra and a scarlet lace thong. 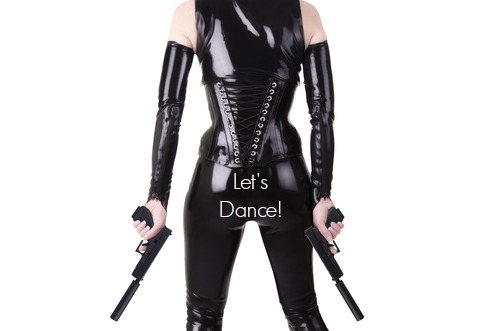 Just when I thought the onslaught was over; a single grenade whizzed through the open breakfast nook window. Without thinking, my Ninja skills kicked in.

I snatched the grenade mid-air and whipped it like an Aroldis-Chapman-106-mph-fastball back out the window, where it exploded, launching two armored men in headsets and ray-bans into my jacaranda bush, DOA.

I quickly donned my Assassin Creed boots; strapped on my throwing blades; my one-woman gatling gun; two amo belts, and prepared to make a run for it.

I didn’t hesitate, but ran full tilt out the front door, guns blazing.

At least twenty-five men took cover. I didn’t stop until I reached the street, where I saw a black Lamborghini Sesto coming straight for me, at approximately 100-mph.

I decided to give the driver as good as I got, and ran straight for him, my gun spitting led at the speed of sound.

Just as the car and I were about to collid,e I took the driver out with a single surgical precision-shot to the forehead with the tiny Baretta I keep tucked up my vagina, for emergencies.

I hit a vertical leap of fifty-seven inches, clearing the hood of the car; kicked off the roof as the Ghini travelled beneath me; executed an Ukemi Judo fall and rolled up to my feet.

I taught that poor bastard how to be an assassin. Too little, too late.

The remaining hit men were so intimidated they fell back.

Whatever it takes to get the truth out of him, besides his name.

(Kemal Pamuk, in case you were wondering);

Yes, my friends. This is what it’s like to be a married, 49-year old mother of two. It’s not for the faint of heart.

This absolutely was not a daydream I had while listening to Imagine Dragons’ Radioactive in my minivan on the way to Trader Joes to buy a crate of Two-Buck Chuck.

But I am curious, what daydreams you have to liven up the humdrum of day-to-day life?

11 thoughts on “My Life as an Assassin”