How Sex With a Pirate Ruined me Forever! 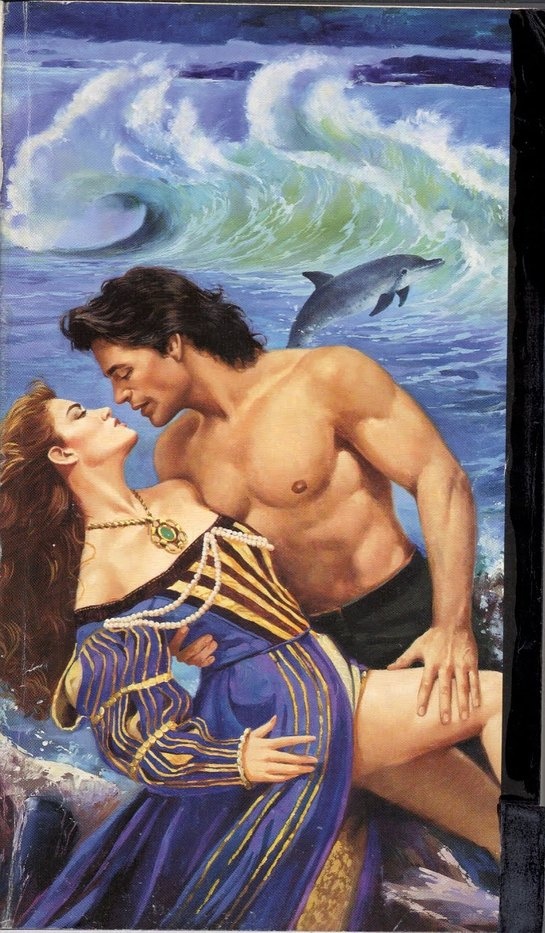 My first lover was Brandon Birmingham, captain of The Audacious, a merchant ship set for the Orient.

He’d mistaken me for a prostitute and had his way with me before he knew the truth — that I was actually an 18-year-old orphan who’d run away from a cruel aunt who hated me for my beauty and Irish ancestry.

Did I forget to mention that Brandon’s eyes were deep gray, which reflected not only the tempestuous seas he tried to tame, but also his tempestuous feelings for me and the swells of my ripe, luminescent orbs of breast flesh?

OK, Brandon Birmingham was a fictitious character and I was actually 12-years-old and reading Kathleen E. Woodiwiss’ “The Flame and The Flower,” the purported flagship of the bodice-ripper onslaught that began upon its publication in 1972.

Bodice rippers and the studmuffins in them were my first lovers.

I couldn’t get enough of their steel-hewn thighs, the hard bands of muscles across their granite chests, the sensuous curve of their lips and other assorted throbbing charms.

They were all so dangerous — pirates, knaves and gypsies — but also had second identities as lords, marquises and noblemen with more-than-willing women trailing them like the steam from a turn-of-the-century locomotive.

Yet Lucien, Dominick, Ridge and Sinclair ended up only having eyes for the heroine, telling her secrets they’d never told anybody, becoming emotionally vulnerable in ways they’d never imagined possible and all the while turning up the sexual tension to 11.

I was addicted to bodice rippers throughout my pubescent years, since my strict parents made it close to impossible for me to be alone with any actual flesh-and-blood boys.

What I couldn’t possibly comprehend as a virgin back then, was how much damage these books were inflicting.

When I met and fell in love with my college sweetheart, he seemed to be exactly like those swarthy rogues I read about.

As a college football player, he had all of the physical attributes of the Marques of Litchfield and very soon after we began dating, he told me he was through with all other women.

After a month or so of passionate necking, I was certain he loved me and I him.

It was time to surrender my maidenhead. And I knew exactly how it should happen.

We’d meet for our tryst in the Bridal Suite at the historic Los Angeles Biltmore Hotel on rose-strewn bedding.

I’d wear the white, silk rose-embroidered nightgown that my lover’s mother, the tragically deceased Marchioness of Litchfield, had worn the night she became pregnant with little Eduardo.

My hair would be long and silken and he wouldn’t be able to get out of his breeches fast enough.

So imagine my surprise when I lost my virginity on the floor behind a couch in the living room of the cockroach-infested campus apartment my love shared with three other football players who could be heard farting like a 24-gun salute in the next room.

I was still wearing my USC Trojans sweatshirt and my socks.

The popcorn strewn beneath us left little round divots in my butt flesh. And I’m pretty sure my dirty talk, “Get off of me,” was a real turn-on.

I can remember thinking in that very moment, “This is what that fucking Kathleen E. Woodiwiss was talking about? What a load of crap!”

Men came and went until I fell in love with my husband. We bore two beautiful daughters and throughout that time I opened nary one bodice ripper.

I was too busy reading Sylvia Plath and Cormac McCarthy and that damned prolific, over-achiever J.K. Rowling.

Then the summer of 2014 rolled around.

I was turning 49, my kids were now 10 and 12 and didn’t need to be kept alive just walking across a room.

Which meant I could, perhaps, selfishly read during our one week vacation at a rental on the sand in Newport Beach.

So as we picked up some supplies for our trip at Costco, I couldn’t help but notice a rack of romance novels at check out.

Before I could talk myself out of it, I grabbed two of the trashy books, my choices based solely on which of the couples depicted on the cover was in the most provocative clinch.

I stealthily slid them to the cashier hoping my daughters wouldn’t notice.

For one full week, I buried my nose in those books (with the covers removed so no one could judge me, including my kids).

Despite my now age-appropriate, intellectual cynicism, the books managed to get me just as hot and bothered as they did when I was young.

And then a terrible thought reared its ugly head – I worried that, just like my first encounter with my college sweetheart, my real sex life would suffer by comparison.

But something funny happened instead.

As a middle-aged vixen of experience, I’d learned that these books were meant to be inspirational rather than aspirational.

I realized they were meant to be used, much like a sex toy, to revivify sexual desire that middle age, with its hormonal attrition, can sometimes dampen (and not in a good way).

What my husband doesn’t know as he toils in our outdoor office today is that tonight, we ride.

This post was originally published in my favorite online literary site, Purple Clover.

Did your first time leave much to be desired, or did you land like two cinders on the hearth of love? And if you like this article you’ll love Shannon’s book, “Married Sex: Fact & Fiction.” You can order it HERE!

3 thoughts on “How Sex With a Pirate Ruined me Forever!”