When I Tried to Kill my Ex With a No. 2 Pencil

I sat on the couch pretending to watch the Late, Late, Late Show; as if I hadn’t been waiting up for him, wondering how many women he’d managed to nail in the seven hour interim between work and home.

He didn’t greet me, just stopped at his desk and began riffling through afternoon mail.

A cool, calm voice in my head said:

Don’t confront him. You’re living together now. Do you really want to rock the boat?

You’re four years in; that’s a big time investment for a 31-year-old woman to throw away when you don’t know if there’s someone better out there that you’ll be able to meet and marry before your ovaries implode.

So I pretended casual nonchalance, stretching and yawning, as if I stayed up late to see what Pauly Shore’s latest, sophomoric, sex-fueled debacle would be.

“Hey honey,” I said, modulating my tone so my quarry wouldn’t sense my prey drive.

To this day I have no idea why that mono-syllabic reply instantaneously sent me into white hot, cannonball, psychosis.

Maybe that “hey” said everything that needed to be said about our relationship. That it was small, inconclusive, off-handed, non-committal and something horses should eat.

Or maybe, over the course of four years, there had simply been too many unexplained late nights when his cell phone ran out of juice, and I had finally run out of patience. 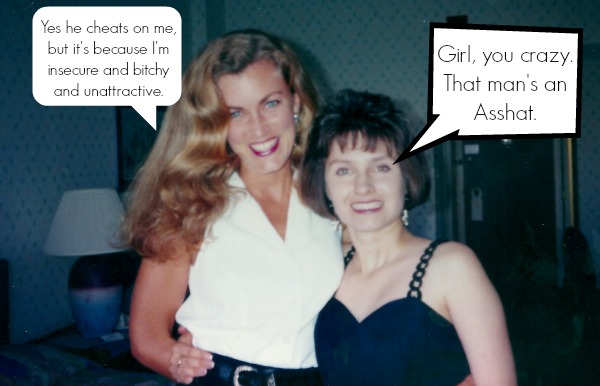 I looked for something, anything to hurl at him.

Where are andirons and crystal paper weights when you need them? Why didn’t I own Nunchucks I could keep handily tucked in the g-string I hated, but wore in order to please him?

There was nothing, absolutely noth …

There was a freshly sharpened No. 2 pencil sitting right there on the coffee table!

Without a second thought I grabbed that pencil.

“Hey, you! Asshat!” I cried, like one of the Sharks calling out one of the Jetts.

He looked up from his perusal of our phone bill just in time to see me launch that pencil like International Knife-Throwing Hall of Famer, Douglas “Chief Thundercloud” Waldorf, end over end, right at his big, fat, cheating, lazy, self-satisfied, bastard face.

The sharpened tip pierced the flesh two centimeters below his right eye.

I felt a brief flush of satisfaction, then startled myself further by combusting into a screaming tirade, while he just stood there dumbly smirking.

That cool, calm voice that spoke to me earlier, who we’ll call Rational Shannon, stepped outside of my body and watched the scene.

Rational Shannon just kind of shook her head and spoke to Crazy Shannon.

“You realize that by behaving this way, you’re giving this Asshat justifications for behaving like an Asshat. Because right now you sound exactly like our Grandma Ann.”

(Grandma Ann was married to my grandfather, an inveterate gambler at the Elk’s Lodge; which drove her into shrewish conniption-fits throughout their entire unhappy marriage.)

“Do you really want to be like Grandma Ann and die at sixty from a heart attack because your heart is always clenched like a fist?” Rational Shannon asked me.

In that moment, I kind of fucking hated that smug little bitch, Rational Shannon.

It was just such a relief to let Crazy Shannon run free, unfettered in the perilous dysfunction of a relationship that was slowly but surely taking her down. All the way down to Chinatown.

My Asshat used the “Pencil Incident” as an excuse to come home whenever he damn-well pleased, because who wants to come home to a screaming harpy acting like … and I quote … “white trash?”

It came to pass, that I still managed to spend one final year with the Asshat, until I realized his crazy-making behavior made me seem to be crazier than him.

You may ask why a bright, intelligent woman such as myself could fall prey to such Asshattery. This is my excuse.

But the good news is, I wanted children who would be raised in a stable home by two parents who loved each other deeply.

I wanted that so badly, I did what I had to do to change everything!

Like George Costanza, I had to think what I would normally do, then do the opposite to finally be able to have a healthy relationship.

What’s the craziest thing you did in your Asshataholic relationship?