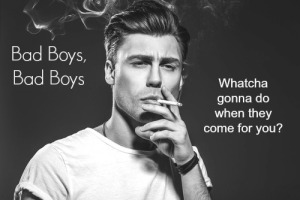 I was an Asshat-magnet, right up until my womb entered its geriatric phase.

Then I got serious and stalked Henry, who I like to refer to as my honey potato man (okay, stop throwing up in your planter).

But pre-Henry, Asshats could sniff out my needy co-dependence from 100 miles away, as the crow flies.

It took me 10 years to ferret out just exactly what kind of Doormat Musk I was emitting in order to get rid of it.

Which is how I discovered the 14 traits that Asshats love.

Transition Counseling Services offers this list of personality traits that are common in the partners of abusers.

1.You have an intense need for love and affection.

2. You have low self-esteem.

3. You are Alcohol or Drug Dependent.

4. You have a background involving emotional abuse.

5. You were an Adult Child.

6. You have Co-dependent Personality Disorder.

7. You gain a sense of self-worth by taking care of your (Asshat).

8. You have an inability to set boundaries.

9. You have difficulty expressing anger.

10. You believe things will change if you just try harder.

11. You’ve made repeated and unsuccessful attempts to leave the relationship.

12. You had parents unable to accept responsibility for their behavior and actions.

I qualify for about 8 1/2 of these. And apparently I’m also…

I will feel the feelings I think you are feeling, when you are actually feeling nothing at all.

In her article, The Relationship Between Sensitive People and Narcissists, Deborah Ward of Psychology Today says:

“What is it about sensitive people and narcissists that creates such an attraction and leaves such a trail of destruction?

“HSPs are compassionate and empathetic by nature. We feel other people’s pain instinctively and want to help. In addition, narcissists are experts at manipulation and control, so they will use your big heart for their own.

“HSPs can feel such intense love and compassion for people that we can believe our love can heal others. And often other people are so amazed and relieved by receiving this much love and understanding, they respond with enormous gratitude and often flattery.

“Sensitive people respond to this praise by feeling good about ourselves and feeling needed and so we give more.

“But as this pattern continues, we end up giving until we’ve got nothing left and are getting nothing in return, under the mistaken belief that if we just give a little more, it will be enough.”

I recommend reading the article in its entirety.

It really demystifies the push-me-pull-you relationship with the Asshat and the signs of an abusive relationship. 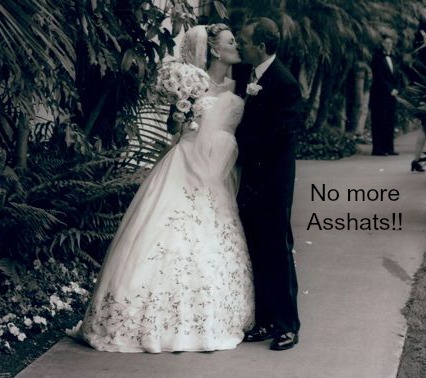 14. You Have a Generational Susceptibility To Asshats

Putting up with Asshattery is a genetic predisposition.

Like all forms of abuse, from the minor — unpredictability, inconsistency — to the most extreme — traumatic physical abuse — cycles of abuse can be generational.

Those of us who come from generations of Asshattery are the most susceptible to the seasoned Asshat.

He can somehow sniff out our doormat-ishness from a country mile away.

I come from a long line of men and women who loved Asshats.

My paternal great-grandmother was married to an alcoholic who never came home from work on weeknights, but stayed home on weekends to get blotto.

He terrified his children so much they hid under the house.

My paternal grandfather was a kind man who, unfortunately, had an inveterate gambling addiction.

This forced my dad to start working at age seven, and no matter how much money my dad accrues, it will never be enough to make him feel safe.

Her second marriage was to a skirt-chaser who would be married a total of seven times before he took his last breath.

My first stepfather, Nick, seems to be the template from which I drew my two long-term Asshats.

Nick spent much of his marriage to my mom lying, cheating and just generally being a moody bastard who got mad at her for being mad at him when he behaved like an Asshat.

In turn, my mother became so embroiled in the drama of this marriage, she wasn’t always a present mother, and eventually couldn’t be my primary custodian, so I had to move in permanently with my dad and stepmom when I was nine.

I’m proud to say my mom broke this generational cycle of emotional abuse when she married her final husband and real love, Guido.

Despite my ancestors’ best efforts, by the time I came of Dating Age, I’d absorbed inconsistency, neglect, lying, cheating and disrespect on a cellular level.

If you come from generations of Asshattery you, too, may not be able to determine what behavior is acceptable.

And while the pain of being the victim of this abuse in all of its varying forms and extremities is no laughing matter, it’s important to be able to find the humor in our situations.

This is one of the first indicators that there’s hope for us, because we’re resilient and willing to get into the audience of our own lives long enough to see how ridiculous our lives have become.

And from this humble place, change is possible.

“A well-developed sense of humor is the pole that adds balance to your steps as you walk the tightrope of Life.” – William Arthur Ward (a proverb-tarian)