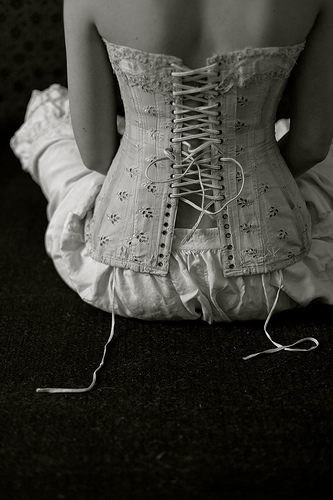 I met my friend Mistress Justine for lunch on Friday.

That’s not her real name, but it should be.

She and her husband, Raoul (also a pseudonym) have been married 15 years.

The last time we spoke, Justine admitted their sex life had stagnated.

But as I looked up from my vegan menu, I was blinded by the vision of a smoking, hot, sex Goddess walking through the door.

She wore a white column dress, sky-high white pumps snapped closed with metal buckles and a black, leather corset peeking from her décolletage.

“What the hell happened to you?” I railed at Justine.

“You lost weight!” I accused.

Maybe 15 pounds? If I lost 15 pounds I’d take out an ad in the Enquirer. I’d tattoo it to my forehead.

“Sex twice a day with Raoul.”

It was at this moment I thought I might have to ditch the friendship. Sex twice a day with your own husband? In what universe does that happen?

Apparently, it happens when a marital dry patch leaves you so parched that you consider sexting one of your colleagues.

Because you care about your marriage, you go home and tell your husband you’re considering sexting one of your colleagues, which effectively gets his attention.

All of which, apparently, leads to sex twice a day in real, not virtual, life.

I sat, mouth agape over my peach tea and bean-sprout burger, opposite Mistress Justine.

I thought I’d gone the extra mile by role-playing with my husband and having the stay-at-home date when our kids had sleepovers.

I thought pruning the lady garden was edgy. Apparently, I’m the Pollyana of wife dominatrices.

I worried Mistress Justine and Raoul were swinging, thinking at this point anything might be possible.

She said “no.” It wouldn’t work in her marriage, and why would she want to do that when she has this?

She treated me to an Instagram of Raoul’s above-the-waist hairless torso.

In return, I bestowed the greatest compliment one married woman can give to another, “Raoul’s doable.”

“He is, isn’t he?” cooed Mistress Justine, as if he were an adorable purse dog.

“Oh, Henry’s doable too!” she assured me.

“Yes, he is.” I agreed, somewhat mollified after her gratuitous display of marital, sexual satisfaction.

I bid Mistress Justine adieu and watched a phalanx of men’s heads turn in the wake of her pheromones. I quickly decided …

First order of business. Install a lock on our bedroom door.

Second order of business — well, I’ll just keep that one to myself. But if you happen to see me in an equine store trying bits in my mouth, just look the other way, people. Look the other way.

What do you do to incite adventurous sex with your spouse? (PG-13 and feel free to include poetry)