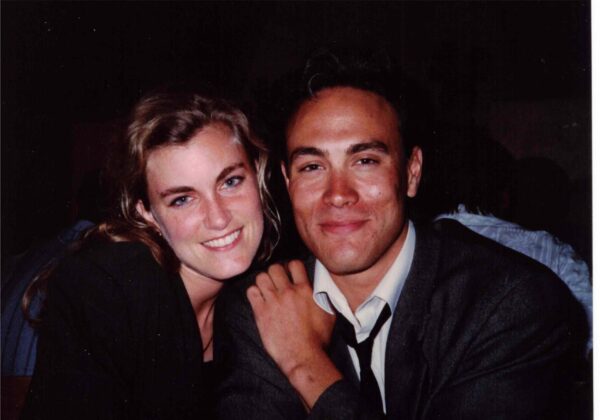 Twenty-eight years ago, as of this writing, the trajectory to stardom was cut heartbreakingly short for promising young actor, Brandon Lee. Brandon was legendary martial artist and actor Bruce Lee’s charismatic son. He was carving a name of his own in film when another actor accidentally killed him on the set of the gothic, comic film The Crow.

I spent a year with Brandon before his rocket took off and this is the small part of his story that is mine as well. I remember you, beautiful boy. The following is excerpted from my book:

Smash, Crash and Burn: Tales From the Edge of Celebrity

It’s one a.m. and I’m wiped out after a long waitressing shift for the Ahmanson Theater crowd in downtown L.A. I’m about to turn out the light over the clock radio when my phone rings.

I figure it’s my old college roommate calling after anchoring the eleven o’clock news at KSBW Monterey. Too tired to talk about her latest military romance, I let the answering machine pick up. My chirpy outgoing message grates on my nerves, then the long beep.

“Shan? Shannon, are you there?”

His voice is weighted by sadness, urgent with some indecipherable fear. Adrenaline courses through me, I quickly pick up. “Hello?”

“You’re there.” He sounds relieved.

“I don’t know. I was listening to John Lennon, you know … to Beautiful Boy … the song about his son …”

Brandon’s crying, which he’s never done in front of me. He’s larger than life, given to grand gestures and grandstanding. He’s confident, cocky and romantic, but rarely vulnerable.

Banging the phone down, I yank on my sweats and grab the glasses I wear when I’m not wearing contact lenses. I jump in my shoe-skate Honda and pull out of my garage in sixty seconds flat. Rescuing people is my religion.

When I arrive I find Brandon in his bedroom huddled under his heavy duvet. He looks like a small boy, with dark smudges under his eyes. “Hey, sweetheart,” I say.

“Come here,” he holds his hand out to me. I climb into bed next to him, put my arms around him. I notice the TV is on.

“What are you watching?”

Footage from a VHS tape of his father’s ceremonial funeral in Hong Kong sixteen years earlier plays onscreen. In the grainy footage Bruce Lee’s corpse rests in an open casket displayed to all in a throng-filled square that’s a paparazzi/media circus. White silk shrouds his body, revealing only his waxen, expressionless face.

Photographers shove to get pictures. Security holds back fans.

Brandon’s mom, Linda, wearing short brown hair, maintains a stoic expression behind dark sunglasses until she’s led to the casket and sees her husband. There she breaks down.

It’s strange to see this iteration of Linda.

The Linda I know is cheerful, bubbly and blonde. She keeps a welcoming, humble ranch home in the Palos Verdes and is a low-key mom with her feet planted firmly on the ground. Not the tragic, public widow in this newsreel.

Next there are shots of Brandon, aged eight, and his little sister Shannon, then four, hoisted up by handlers so they can look down at their father in his coffin.

They seem bewildered. Incapable of processing the madness of the situation let alone the fact of their dad’s death.

“You can’t watch this anymore,” I say. “You’re just torturing yourself.” I get out of bed and turn off the TV. Brandon doesn’t try to stop me or argue with me.

I climb back in bed. Kiss his face. Hold him. “Don’t leave,” he says in a way that makes the hair stand up on my neck.

It’s quiet for a while. Brandon’s breathing evens. His body relaxes.
I think he’s fallen asleep. Then he says like a mantra, like a prayer, “I’m going to die young. Younger than my dad did.”

But I’m wrong. Bruce Lee died in Hong Kong on July 20th, 1973 in his rumored mistress’ apartment from brain edema, a possible reaction to a painkiller.

The coroner’s report said, “Death by misadventure.” He was thirty-two years old.

Brandon will die twenty years later on March 31st, 1993 in Wilmington, North Carolina when a dummy bullet penetrates his abdomen and lodges in his spine while shooting a scene from the gothic-comic film The Crow. He will only be twenty-eight years old.

I’m an aspiring actress (and, as night must follow day, also a waitress) hanging out at The Cat and Fiddle pub on Sunset Boulevard with the cast of an Equity-waiver play called Fullfed Beast, written and directed by John Lee Hancock.

Later Hancock would go on to write and direct films like The Rookie and The Blind Side, but at the moment is struggling for work like the rest of us.

My friend Robin, who is the makeup artist for the play, invited me to the after-party. I watch the actor named Brandon Lee shoot pool. Robin told me earlier that he’s Bruce Lee’s son, which I thought was kind of cool. But it wasn’t until he walked onstage, chock-full of charisma, that my heart throbbed like a teeny-bopper at a David Cassidy concert circa 1975.

He played Flea, a hard-edged incarcerated criminal, and I sat in the front row of the audience so close to him I could’ve plucked the cigarette he inexpertly sucked right out of his mouth.

But whenever I approach Brandon at the pub he keeps leading me over to his best friend, Bill, then dashing off. I’m not interested in Bill, who looks a lot like me, blonde, blue-eyed, familiar. It’s Brandon I find dreamy. To me he’s exotic, fine-boned, hazel-eyed, with dark brows and hair. He moves like a sinuous cat.

As the night winds down I’ve given up my Brandon quest.

I sit at a table despondently finishing my beer when I feel two hands placed on either of my shoulders. I lean my head back and look up to find Brandon’s face looking down into mine. “Are you flirting with me?” I demand.

“Am I flirting with you?” He seems to consider the idea for the first time, teasing me a bit. “I guess I am.”

“Good,” I say with a confidence I wish I had when it came to auditions. I’m always very confident with men, right up until the moment I fall in love with them, after which I become a nervous wreck.

Having recently broken up with my college sweetheart, I hope I’m done with Love and will remain as simultaneously aloof and amorous as a female Errol Flynn. Two minutes later I’m on the back of Brandon’s fast-flying motorcycle grabbing on to this leather-jacketed wild-child for dear life.

The first thing I notice when his motorcycle rolls up the long, cracked-cement driveway to his bungalow house is the 1959 Cadillac hearse.

“You’re not doing the whole James Dean thing are you? The leather jacket, the boots, the motorcycle, a hearse?”

“Baby, I’m a lot more original than James Dean.” Opening his front door with a flourish he says, “Welcome to my humble abode.”

VHS tapes of Last Tango In Paris, A Clockwork Orange and Harold & Maude sit on top of his VCR. The walls are whitewashed, the beaten up hardwood floors covered with threadbare Persian rugs.

He’s got the whole eclectic, mysterious, artsy actor-thing down to a T, I think. It’s working. Weak knees? Check. Sweaty palms? Check. Butterflies in stomach? Check, and we’re ready for lift off.

“He’s like Jack Kerouac,” says Brandon, working a perhaps over-rehearsed reference. “He’ll disappear for days and just when I think he’s dead, that’s when he comes off The Road, hung-over and hungry.”

“This house is major chick bait.”

“You ain’t seen nothin’ yet. Would you like to accompany me into the den?”

“The den? Or your woman lair?”

We step into an enclosed patio graced with a vast, inviting beanbag chair. Really more of a bean bag bed. I can’t help but laugh. “After you, milady,” he offers the beanbag like a Seventeenth Century highborn baron-robber straight off the set of The Three Musketeers.

I sit and am instantly vacuum-sucked into the center of the beanbag, ostensibly trapped.

Trying to reposition myself, I grunt and strain, which only manages to further entrench me in a sea of cascading beans.

“Maybe this’ll help,” says Brandon and he plops right down next to me, catapulting me straight into his arms.

We’re both laughing. For all his hip, I’m-a-cool-eclectic-dude duds and home furnishings he has a surprisingly goofy laugh. It’s endearing and uncontrived.

He kisses me. It’s a sweet kiss. It asks permission and makes no assumptions. I return his kiss, which turns out to be more than a kiss. It’s an invitation into his life. For one brief year Brandon Lee will be my beau. 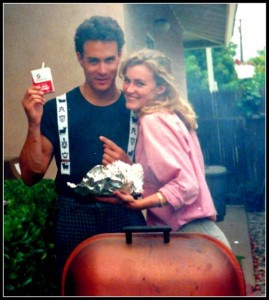 On the day Brandon dies I work the lunch shift at a Santa Monica restaurant called Ocean Avenue Seafood. It’s an ordinary day.

But when I get home around three o’clock there are twenty-three messages on my answering machine. My first thought is that my dad’s had a heart attack. His doctor’s want him to have open-heart surgery and he simply refuses.

With quick-sweating palms I push the message button. It isn’t until the fifth message that I realize what’s happened.

The first four messages are ambiguous condolences from friends, but the fifth message mentions Brandon. “I’m so sorry about Brandon Lee,” says a co-worker. “You dated him once, didn’t you?”

I click on the news and Brandon’s the headliner.

I haven’t seen or spoken to him in two years and three months. I wonder why people are calling me? He isn’t in my life anymore. He doesn’t matter to me.

But that night I have the closest thing to a panic attack I’ve ever had. My heart won’t stop pounding. I can’t catch my breath. My brain is invaded by horror-movie images of Brandon’s shocking death.

Thus begins my year of magical thinking: I believe wholeheartedly that Brandon sought Fame to step out from under his father’s shadow and the price of Fame was his life.

It’s two in the morning. A knock at the door of Brandon’s house startles us awake. Quicker than I can open my eyes he’s moved off the bed and nimbly picked up a baseball bat he keeps by the door of his bedroom.

I listen nervously for sounds of violence in the living room, wondering what I’ll do if I actually hear any. I search for a weapon I can brandish other than my tennis shoes when I hear a woman’s voice, emotional, urgent … 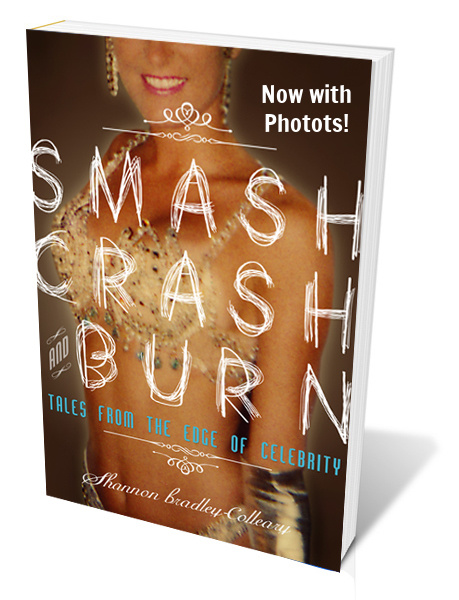 The remainder of this Brandon Lee memoir is in Shannon’s Book, “Smash, Crash & Burn: Tales From the Edge of Celebrity.”

Praise for the Book:

“It’s the literary equivalent of a summer night, a good friend and a gin-and-tonic.

“Shannon is a deft writer; a natural storyteller with a wicked turn of phrase and frighteningly specific memory. (David Schwimmer’s acting class antics are hilarious!)

“As someone who was also a young adult in the ’80s and ’90s, I felt like I was visiting the parallel universe I’d only wondered about: What happens when you have a brain AND big hair — when you want to be An Actor but everyone wants you in Spandex?

“My favorite parts, though, are when Shannon reveals — without a drop of sentiment — the deep pain and losses in her childhood that drive her into wanting to be Somebody. Well worth reading! ~ Greg Thompson/writer-producer Bob’s Burgers

Both Kindle & Paperback Are Available on Amazon. CLICK HERE!