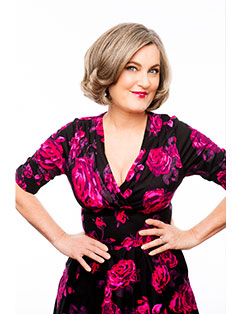 I was winning the sex game at the Passion Party and I would be able to pick out my very own crystal magnet in the shape of a stiletto shoe as a prize!

The only problem is I hadn’t done it in an elevator, or on an airplane, or in a box, or wearing sox — ooops, slipped into Seuss-speak.

I had done it in the cargo-hold of a minivan with my husband during Date Night on a public street at 11 p.m. Which was edgy.

We could’ve been arrested.

Our children – signs we have had post-marital coitus – could have bailed us out. They had enough money in their piggy banks. But I digress.

My friend, call-name Tango 5/6, strong-armed me into attending a Passion Party at her draperist’s home in Beachwood Canyon (Yes “draperist” is not a word, but it should be.  (Stop quibbling … another good word).

Would there be men with bolts through their penises?

Would there be live sex acts incorporating beef carpaccio? Would I leave with a tattoo of Charlie Sheen on my left buttock?

No. But there would be a bevy of women playing Sex Games musical chairs and sitting on each other’s laps. Sexxxxyyyyy!

1.  Housewives looking for new things to torture their husbands with.

3.  Women who’ve given up on men, but not on vibrating plastic.

Which one am I? Perhaps all four. I’ll never tell. I prefer to maintain my air of mystery.

After we’d all eaten our weight in chocolate brickle and quaffed several gallons of Prosecco, the ice-breaking sex games began.

Our Passion Parties Hostess, Meg, had a stack of alphabet cards.

She’d pull a letter and the first person to yell out the sexiest word corresponding to the letter would win a prize. Neither Tango or I won.  This is why.

Apparently, she moonlights as a proctologist.

Apparently, I moonlight as a longshoreman.

Next came the “Have you ever…” game, which I won handily. Which means the other attendees were virgins. After the getting-to-know-you games, we were entertained with a parade of sex unguents and toys.

Stand-outs in no particular order or preference:

1.  Nibblers: a faux strawberry flavored edible balm which is supposed to bring sensation back to deadened nipples stretched to their tether by copious amounts of breast-feeding.

3.  The Gigi: A portable vagina for your spouse. “She” is the only woman you can trust with your man. This also seems to be a product for women who don’t actually want to handle their husbands’ penises.

4.  The Clitoris Cream: This product is supposed to bring blood rushing into your clitoris (even if it’s “average” in size like mine).

Meg suggested we all take a little dab of it and apply it in the bathroom. There we were, grown women standing single file outside the bathroom holding our applicator sticks waiting for our turn to apply.

Twenty strangers sitting like Catholic girls with their legs crossed trying to pretend their vaginas weren’t on fire.

5.  The G-twist: This looked like a perverse gynecological instrument you might find in the crime scene of the movie Se7en. Or perhaps in the Torture Museum in San Gimingano, Italy. Or in Jeffry Dahmer’s basement, Cruella DeVille’s puppy mill, and (I can’t resist) inside Charlie Sheen’s coke-hollowed nostrils.

The G-Twist was meant to stimulate both the clitoris and the G-spot while having intercourse. Intercourse … with SATAN!

The evening wound down when the Passion Party attendees mutineed, no doubt drunk on the clitoris cream, and began throwing Tongue Ticklers and Pulsing Orbiters at Meg.

Tango and I left with our wallets 50 bucks lighter and our clitorises atingle swearing we’d rather mortify our own flesh like 13th century Catholic flagellants than attend another Passion Party.

Oh who am I kidding – Meg – your creams have given me a new lease on life. Me and my numb lady bits are forever indebted!