How Demand TV Ruined My Life

I’m about to make glassy-eyed love to my Demand TV.

The girls are in bed after I read the illuminating Captain Underpants to them, tickled, scratched, massaged and hypnotized them. (“Your feet are getting veeerrrry heavy. Very heavvvvyyyy.”)

But it’s over now. All behind me. (Though I still bear the scars)

I have my popcorn. I have my wine. And I have the remote, which I will relinquish only when it has been prised from my crimson gel-manicured claws.

Henry’s making cackling love to Stephen “Caw” Colbert on his Mac in the garage office. It’s just me and the Direct-TV playlist.

What do we have …

Hmmm, Michael Douglas in No Holds Barred! I can hear about his throat cancer and be glad I don’t have it.

Or how his wife Catherine Zeta Jones has Bipolar Disorder II, the all too deserving price she pays for fame and beauty.

There’s a medical show called Turning Back The Clock 20 Years. Not that I need to do that.

There’s a show called, The Girl Who Grew Up in a Cage. Hmm.

Would it be rubbernecking at an accident scene to watch it? It could have helpful hints about how to know if your neighbors are keeping a child in a cage in their basement (extra newspapers, eye-dropper water dispensers).

The cage was so small. I feel dirty.

I’m going to bed. But I should just tidy up the playlist because we’ve only got 32% free space and what if we get to 0% free space and miss recording something and have to actually live in the real world in real time?

Now I’m really off to bed.

Does anyone who watches Justified notice how often they use each other’s first and last names?

Now I must be off to bed. Let me just check if anything else can be deleted …

I see Henry’s had a Military Channel binge:

The Fast-Attack Stealth Ship, The Battle of the Bulge: Race to Bastogne, One Time in Hell, The Korean War, Adolph Hitler’s Last Days, Inside the Reich,Hitler’s Body Guard. Etc etc etc.

Does this mean Henry’s a candidate for hormone replacement therapy?

Or that I need to pleasure him more frequently?

There’s an episode of Hoarders recorded. I certainly didn’t record that. No white-trash reality TV for me.

I think I’ll just go get Jumpha Lahiri’s Pulitzer Prize winning Interpreter of Maladies from the bathroom and read myself to sleep.

Those poor cats. All 59 of them living in that hoarder hell hole.

Am getting sleepy … let me just make sure Parent Controls are activated … Oh.

A new Your America with Lisa Ling … You’ve got to be kidding me, Pray the Gay Away? Don’t people know homosexuality’s not a choice?

That’s it! I’m donating 25$ to GLAAD which will hopefully help keep the gays away from faith healers.

In keeping with gay rights, I’m going to do a smart search for Milk with Sean Penn.

One new Mildred Pierce. Wonder if Guy Pearce’ll be naked in this one? Oh who cares, I have to go to bed.

This is ridiculous. He and Kate Winslet already had their big sex scene in Episode Three. I doubt they’ll have another one …

They didn’t have another one, but Guy was briefly shirtless.

Which was nice. I think he might be gay. Manicured chest, no belly fat, no straight men look that good after 40. Except Henry, of course (love you, honey).

Don’t care if Guy Pearce is gay. Will take him however I can get him. He’ll be pleased I’m donating to GLAAD … have to go to bed. But good to catch up on playlist.

Shit! The season finale of Glee. “Just a city boy, born and raised in South Detroit, he took the midnight train going anywhere.”

Wonder how many of the characters in Glee have shared STDs they’re swapping beds so often? It’s hard to enjoy the music when I’m thinking about the STDs. And the microbes in their spit …

The hell with going to bed. I’m gonna pull an all-nighter or how am I ever going to catch up on my Southlands, my True Bloods, my Offices and Modern Familys?

If I miss out on t 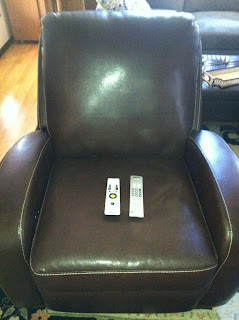 he first episodes how can I understand the season finale? I can’t, okay?

I’ll end up slipping through the cracks so when I graduate to the water cooler I’ll FAIL!

Then pretty soon I’ll lose my job, my home, my life and I’m out on the street (… which I could maybe parlay into a reality show).

Speaking of which … One new Survivor: Redemption Island. Will Boston Rob finally win?? …

“Mommy?” “Wha…?” “Mommy, let go of the remote, you have to braid my hair for school.” “You can never have the remote. Nevahhhhh!” “Mommy, you have to wake up and take us to school!”

“My feet are getting verrrrry heavy. Very heavvyyy …”

WOULD LOVE TO KNOW WHICH SHOWS YOU CAN NEVER TURN OFF AND WHY?

4 thoughts on “How Demand TV Ruined My Life”