Of God and Phlegm

I’m lying in bed useless to the child I have, trying to get over a horrible cold so I won’t have to take any more over-the-counter drugs that might give the child-growing-in-my-belly three breasts (like Anne Boleyn – and just look where those got her)

I’ve become self-obsessed trying to gauge what would be the best tactic for my recuperation.

I listen closely to each labored breath to hear whether there’s still phlegm and if there is phlegm, exactly what color it might be.

I feel my forehead, take my pulse, check my tongue in the mirror, palpitate various glands.

I’m not someone who should ever come down with cancer.

I’m just saying to whoever is in charge of handing out cancer, I’ll find a way to make it worse. Somehow.

I really wanted to do pregnancy right. Only eating tasteless whole grains, baked Tilapia and poi while doing water aerobics in saline solution.

Instead, I’ve been mainlining Robitussin and shot-gunning Fruit Loops because I deserve some pleasure!

It seems everywhere I turn lately I’m brought back to this:

I’m not in control. I can’t even control what’s going on in my own body. I know I’m supposed to be learning something from all of this. And I suspect it has something to do with letting go. And faith. 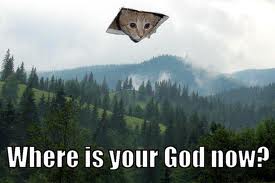 Which brings me to God.

Even for me, a lazy agnostic, as soon as that sperm hit the ovum God suddenly seemed plausible.

I was raised in a religion that has worked out great for most of my family.

However, there was one small fly in the ointment.

I didn’t believe in heaven or hell.

Or in the Bible as a literal document. Or in ONE TRUE CHURCH. Or in following strict rules in order not to commit a sin. I feel like I just committed a sin by writing that. (Don’t tell God. Or Jesus).

But what happened was I threw the baby out with the bathwater, eschewing any kind of spiritual life.

I was still subconsciously encumbered by religious guilt (particularly in my sex life – note the late discovery – at 27- that the female orgasm actually exists!), but had nothing to turn to during troubled times except my own labyrinthine brain which had often caused the trouble in the first place.

Somewhere in my early thirties during an anxiety attack over my latest disappointing love affair, I decided I’d better find a “God Of My Own Understanding.”

I tried a suggestion from The Artist’s Way: GOD = Good Orderly Direction.

I tried “Father/Mother/God” from a non-denominational church that I and several drug addicts attended.

I tried a “Higher Power” from my Al-Anon program.

But all of these lacked the specificity of the Church God who was a man with a beard and a staff who could turn people into pillars of salt and part the Red Sea.

My ambiguous, floaty God didn’t seem to hold water against this black-and-white God. Which was okay, until now.

Because very soon Clare will turn to me and ask,”What’s God, mommy?” And I’ll be forced to say, “I’m not really sure, honey.”

I was hoping to have a better answer for this person who currently sees the world through the prism of safety her father and I provide.

There will come a day when she’s on the cusp of yet another break-up, another failed job, more unresolved conflicts with we-her-parents or epic battles with self loathing that she’ll need her own faith to get her through. And I have such a whispery platform for her to build on.

So, trapped between the two worlds of religion and atheism, I pray to my shapeless God – like Joe Banks in my favorite, horribly flawed movie, Joe Versus The Volcano, who awakens to find himself lost at sea, floating on his huge steamer trunk, close to death, looking up at the magnificent beauty of a harvest moon that floats on the ocean –

“Dear God, whose name I do not know, thank you for my life.”

And after this prayer, I somehow feel better, like maybe I don’t have to have all the answers. And I can let go. After I stop coughing. If that ever happens.

1 thought on “Of God and Phlegm”