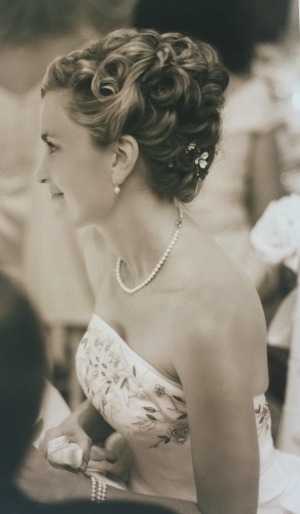 Sixteen years ago today, I had a radical dislocation of my identity.

I received my first ever wedding proposal at the age of thirty-five.

The day before, I was a single, struggling actress and playwright in debt from travel and misadventures.

On my good days, I liked to think of myself as a Jack Kerouac character, one of his “mad” people:

“the ones who are mad to live, mad to talk (…) desirous of everything at the same time, the ones who never yawn or say a commonplace thing, but burn, burn, burn like fabulous yellow roman candles exploding like spiders across the stars.”

On my bad days, I felt like I was living pop singer Charlene’s cautionary tale.

I’d “been to Nice and the isle of Greece and I’d sipped champagne on a yacht,” and while I hadn’t been “undressed by kings” I’d certainly been undressed by a Oaxacan dishwasher.

My Christmas Eves were spent sleeping on my married younger sister’s fold-out sofa with one of my three baby nieces beside me waking every thirty minutes to ask, “Is Santa here yet?”

My nadir was doing the Walk-of-Shame, balled-up underwear in my clutch and the previous night’s mascara worn like twin bruises beneath my eyes, on the day I turned thirty-three.

By then I’d accepted that marriage and children weren’t going to happen for me. I pretended I didn’t want those things. What self-respecting Feminist/Artist would?

And then came the proposal and an inordinate amount of happiness. That’s when the fear set in.

The words “You’ll never be a spring bride!” ricocheted through my brain like a plug from an eight ought six.

Each time my fiancé left my house, I was filled with the dread he’d be abducted in an L.A. carjacking to be discovered later in a ditch in Paso Robles with one ear missing which would later be mailed to me cash-on-delivery.

I broke the news of my engagement to my single roommate, Caprice the way one delivers a vial of nitro glycerin.

“I can stay as long as you need to help with rent.”

“I’m used to being alone,” she murmured.

I wondered what she was talking about. We’d lived together five years and shared one bathroom. We knew each other’s shower routines and toilet habits to the last detail.

I’d thought Caprice and I would end up living together forever, eating Trader Joes Wheat-Free Waffles, taking Chinese herbal supplements, listening to Lilith Fair music and taking the odd road trip to Burning Man while the rest of the world got married, bought homes, had children who would be three, then five, then eighteen, while we stood still, petrified like two forgotten, long-dead midget palms.

I had a pang of survivor’s guilt.

“I think it’s great, if you’re someone who believes in marriage,” Caprice sniffed, then proceeded to play a Cowboy Junkies dirge and ignite a clump of sage, burning it in a funereal manner.

Through the smoking sage, I packed my belongings for the move to my new home. My life up till then fit into three plastic storage boxes.

I’d leave Caprice the old lasagna-splattered microwave, my beat-up, spaghetti encrusted pots and pans, the cheap forks and knives I bought at Vons for ten bucks that bent when I ate meat.

A forensics team would find remnants of the married actor who showed up to rehearse a scene from “Two For the See-Saw,” going commando under his sweats and smelling faintly of citrus that reminded me of the orange trees in my childhood backyard.

And the redheaded James Dean wannabe, who liked to ride his motorcycle standing up, until he got hit by a Brinks truck on Mulholland and ended up in traction for six months.

There too they might find the different Shannon who lay with each of them.

I left most of my books, half of them self-help tomes like Dr. Laura’s “Ten Stupid Things Women Do to Mess Up Their Lives” and “Smart Women/Foolish Choices,” each copy highlighted, earmarked and sodden with tears.

I packed Kerouac’s “On The Road.”

A touchstone to the times I turned lumps of coal into diamonds:

A lost weekend in Mexico that spawned three one-act plays; a singular Ecstasy trip that made me realize I needed to stop trying to make it as an actress and do something else with my life; the men I’d loved, that shaped me into the woman who was ready to settle down with one I could love and trust.

I stood outside my bachelorette pad, sixteen years ago today, my three boxes stacked next to my car at the curb.

The top one containing the story of my life, thus far in journals.

I thought, fleetingly, of the fact that I was no longer free to do whatever I wanted.

That I was making a commitment to a man who would forever be affected by my choices. That I was embarking on what some would consider a “conventional” life.

It’s all over, I reflected, all behind me now. And then …

“I was surprised (…) by how easy the act of leaving was, and how good it felt. The world was suddenly rich with possibility.” – Jack Kerouac, On The Road

I’d love if you’d leave in the comments three words that describe your spouse. Mine are: tenderhearted, devoted, uproarious!

6 thoughts on “Blown Sideways: The Day I Left Jack Kerouac”