How Do Sex and Nascar Racing Add up to a Healthy Marriage? 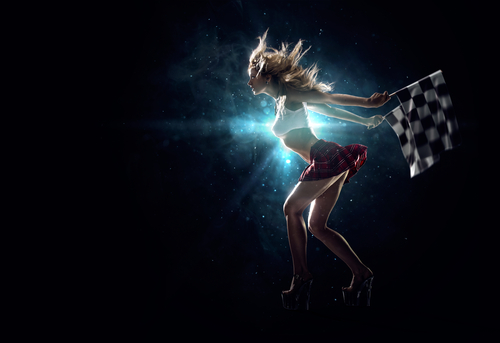 Which means my evil plan has worked.

I don’t have to write my blog anymore, because now my readers can do it for me!

Por ejemplo. In my last “Bedroom” post I asked married couples if they were willing to admit the actual number of times they have in a week, month, year – not the trumped up number they tell their friends.

Here’s the best response I received, and perhaps one of mytop ten favorite comments I’ve received over the last four years.

“If I were to think of our sex life as a Nascar Race (…) then there are some months that we go around the track quite a bit.

“I pit stop long enough only to get new rubber and often have a crew-chief telling me how to go faster, drive harder and encouraging me to come up on the corners ~ this after she tells me I’m the best driver around (she’s tough on my ego).

“After a busy season we put the car in the shop, and bring it out for a few practice laps every once in a while.

“I try a few new moves to see how she handles, but then right back to storage.

“It should be noted that the crew chief only likes new moves, if either discussed beforehand or we try them out in first gear.

“Now, I am actually not on the Nascar circuit. If I was then I would be given a schedule months in advance and it would be guaranteed, rain or shine.

“I actually drive in a much smaller circuit that is unscheduled and runs like a rave party ~ meaning I find out it’s on only moments before the doors open.

“Also, in my circuit, the crew chief has the power to pull the race at any moment up to and including when the flag’s about to drop. Yeah, she has that much power

“Back to the laps count.

“Factoring in (with new math of course) all of the above, I get a solid 8* laps every 3 weeks and then off for a week.

“It should be noted that when I was a younger, sportier model we would hear of other ‘race teams’ going round and round the track.

“When we moved to the classic models division (40+ league), we would see these same teams and hear that the cars might not have completed as many laps as they led us on to believe.

“We always giggle, and then thank them for misleading up. You see, it was because of them, we thought we needed more tuning on the engine and we let the rubber hit the road, so to speak.

“All in all we are very happy. We are a few years into our classic model races and have yet to put any high-octane pills in the tank for a better burn rate.

“We (which means I) no longer care how many laps my competitors are getting because, as mentioned above, my crew chief still thinks I’m the best driver around

“These are an average only of the driver counted laps. Crew chief may have different numbers.”

Thanks for my smile today Trevor! (And no, people, I am not on the pit crew!)

SOME AWESOME RACING QUOTES THAT APPLY TO LOVE AS WELL:

To achieve anything in this game you must be prepare to dabble in the boundary of disaster. – Sterling Moss

2 thoughts on “How Do Sex and Nascar Racing Add up to a Healthy Marriage?”