The One Thing Needed to Leave an Abusive Relationship

There’a saying in Al-Anon (a 12-step program which is really for people who are addicted to other people … shyly raises hand) and it’s this:

What the hell does that mean? Don’t worry, I’ll get to it. But first:

When I started my recovery from my addiction to an Asshat who lied, cheated, filed his dead foot skin onto a paper towel and left it lying around the house in places where I could step in it, I was full of pride.

These are the things the voice inside my brain told me:

1. You are so much smarter than the Asshat/abuser. You can trick him into changing. It’s for his own good.

2. He is awful and you are good and it’s very important you make him understand this.

3. If it weren’t for this f-ing Asshat you wouldn’t have to get up at 6:30 in the morning on a Saturday to attend a 12-step program with a bunch of losers who are so much worse off than you are.

4. I can walk away from my abuser/Asshat through sheer force of will.

Does any of this grandiose, bitchy inner monologue sound familiar to you?

If so, you are probably trying to fix your brain with your brain. Fixing our brains with our brains is thinking we know more than anyone else, and don’t need advice or influence from another person or spiritual guide to fix our own lives.

But here’s the thing, without help, even if we do manage to extricate ourselves from our current abusive relationship, we are likely to go right back out there and choose the same Asshat all over again, just in a different body.

It took a very long time for me to accept the fact that, when it came to dating and romantic relationships, I had absolutely no idea what the hell I was doing. I had to hit rock bottom, what seemed to be a thousand times, before I became humble enough to finally seek guidance.

One of my rock bottoms was discovering my boyfriend romancing another woman at 2 a.m. in his apartment, which I’d been staking out for three days. I was on a first-name basis with the cops in the police car next to me staking out a drug ring. We exchanged donuts.

After my boyfriend’s flagrant affair, I finally got humble and asked for help. Okay, don’t freak out, I like to use the term “Higher Power” when I talk about where I sought help. But for those of you who are not religious or are agnostic/atheistic, a higher power does not have to be God.

A Higher Power is the #1 Thing you need to get out of an abusive relationship.

Because we simply cannot fix our brain with our own brain. I eventually asked a woman named Joan to be my sponsor in Al-Anon.

Joan was my higher power and kicked my ass by forcing me to take actionable tasks, using the 12-steps, to not just leave my abusive relationship, but she also helped me heal my broken places so I could change my choices the next time around. 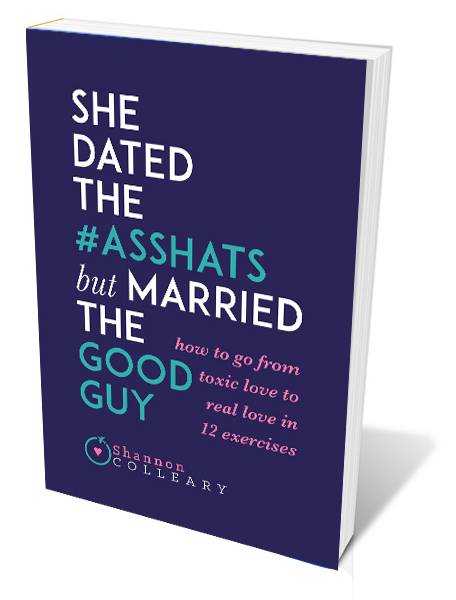 If You’re Struggling in a Toxic Relationship:

Sign-up for Shannon’s occasional newsletter, and be sure to pick up Shannon’s book here or click on the photo. It’s a game changer!

“It demystifies codependency and why some women have such a hard time leaving emotionally abusive relationships. Shannon offers practical, actionable tasks to overcome love addiction and doles it out with a refreshing sense of humor. I highly recommend this book to anyone preoccupied with changing or controlling their partner. I have recommended this book to my girlfriends who are struggling with their relationships. The author is inspiring and I enjoyed the book so much that I read it again soon after.”