2014 was neither the best of times, nor the worst of times. It was just, well, the times.

But, we did get to start the year in Paris where we each did exactly what we wanted.

Here’s a potpourri from our trip:

From Paris, we came home to the relentless routine that typifies the life of a suburban family.

Where to find the magic in lives that are bent toward earning a living and navigating the chicaneries found in the 5th and 7th grades with their:

These are the moments I’ve plucked from obscurity to cherish in 2014:

Clare stepping up to the piano to play the Tarantella Fantastica with attack and emotion at her recital, which I’d thought she wasn’t prepared for because I never hear the kid practice.

She must stealth practice, because I found myself weeping openly, which embarrassed both of my daughters.

Clare getting a “B” in advanced honors math, bringing herself up from a “D” through sheer force of will.

We are not mathematicians in this family and I wanted to move her down to simply honors math, but she refused.

She went in for tutoring every day at nutrition and lunch, gave up playing fall softball because, she told me, “I have to focus on math this semester.”

I’ve never been so proud of a child for not getting an “A.” She inspires me.

Bridget playing Charlie in Charlie and the Chocolate Factory with a perfect balance of vivacity, moroseness, silliness and freckles and with seemingly no nerves.

Then there’s the fact of her singing voice.

She tells me she knows she’s “not a good singer,” but worked with a vocal coach to improve and went onstage and sang fearlessly in full voice. That kid kills me.

Bridget surprised and delighted me again by deciding not to goalie this year in Girls Under 12 soccer like she’s done the last two years, but to get out on the field as a mid-fielder.

Not initially her forte, but she grew exponentially this season and kicked the winning goal to win the championship in the last five seconds in double overtime.

We have carpal tunnel syndrome and battle fatigue, but get up every morning and face the blank page.

I would brag about us, but I think I’ll just say this, we’ve entered our 14th year of marriage still in love, and in like, and even occasionally in lust, and I’d have to say that’s my proudest accomplishment.

My wish for all of us in 2015, including you, is that we continue to put one foot in front of the other to accomplish our goals; that we stay healthy, curious, compassionate, inspired and that we develop an ability to get back up after a defeat and to try again.

Thanks, my dear readers, for all of your support this year.

When I hear from you that something I’ve written made you laugh, or cry, or just in some way feel better, it makes my day.

I hope I can continue to be a happy place for you to visit for many years to come.

I leave you with our Christmas photos, which I took myself and which didn’t turn out the way I’d hoped they woul.

But we managed to get through them without killing each other or the cats. xoxo S 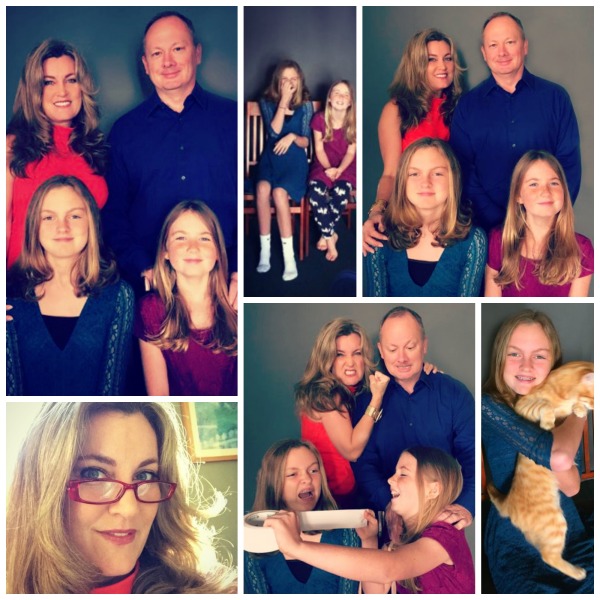