Do You Worry the Asshat Will Perish Without You? 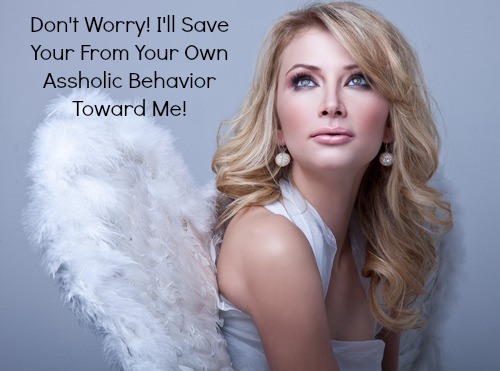 One of the craziest things about dating an Asshat is that they behave badly toward us; i.e. lying, cheating, disrespecting, eating all the Ben&Jerry Cherries Jubilee ice cream in our freezer that we specifically put our name on (the most heinous offense) —

— and then, when we absolutely have HAD ENOUGH and decide to leave them once and for all, they come crying, begging, sighing, sledding back on their hands and knees, pleading to be taken back.

And we, the non-Asshats, don our white hat, brandish our battle saber and charge in on our noble steed to save them from their very own Asshattery; taking them back whilst completely abandoning ourselves in the process!

Yes. I know. That was a very long sentence.

In the pantheon of run-on-stream-of-consciousness sentences, that one even kicks William Faulkner’s, “I Am I” in the As I Lay Dying ass.

And believe me when I say that was one long motherf&#king sentence.

What is it in we partners-of-Asshats that makes us feel so responsible for them when they consistently sabotage our relationship, ostensibly shitting where they live?

I can only speak for myself.

As a child I was an adult for my mom. She was very fragile when I was young, now she’s a badass Viking warrior.

But back then, she was in a debilitating marriage to my first stepdad that caused her a great deal of distress.

And when they divorced, she gave me to my dad while she tried to handle the emotional fall-out.

I took it upon myself, during those years, to be her confidante, comforter and mini-savior.

There were three feelings this engendered.

The first was a sense of out-sized importance, because I can remember as far back as age five, how she thanked me for my advice and wisdom.

The second feeling was fear. Because I felt certain that without me there for support she might fall apart, or even die.

The last feeling was abandonment when she left me with my dad.

So, I transferred all of those feelings to my adult relationships with the Asshat:

I can remember sitting in church after I’d broken up yet one more time with my ex-Asshat because I’d caught him in his apartment with another woman, I actually prayed to God to hold him close and take care of him, now that I had evilly deserted him.

For cheating. Because I was so heartless.

(Of course I didn’t trust God with that task and came back to my ex-Asshat at the first sign of remorse and tears.)

Which leads me to ask you this question:

Do you take responsibility for someone else’s destructive behavior in your relationship?

1 thought on “Do You Worry the Asshat Will Perish Without You?”