What the Asshats Say to Make You Stay!

One of the Sure Signs of an Abusive Relationship

One of the tried-and-true tactics of a seasoned Asshat to keep you in the relationship with him or her is … drumroll please … the C-word.

Not that C-word! Jeez, guys. No, the word I’m referring to is CRITICISM.

It would be unfair to say that prior to the Asshat coming along we had unmitigated self regard.

At least that wasn’t the case for me. When I started college I was just emerging from a fairly horrific awkward phase which included that Triumvirate of Terror:

Having said that, by the time my freshman year of college rolled around the zits were gone, the boobs filled a small B-cup and the pubic head ebbed and flowed with the ever-evolving curling iron/hair gel technology. There was a light at the end of that spit-curl tunnel.

But then I fell in love with the Greek God.

I’ve mentioned him previously and have to reiterate that there was a lot of real love in our 5-year relationship, but it was always undercut by a current of Asshattery on his part, and masochism on mine.

When the three-month honeymoon period ended, that C-word reared its ugly head.

We were sitting on my dorm bed. I was wearing shorts when he reached over, pinched my thigh and a few little dimples appeared.

At 18 I didn’t know what cellulite was. I’d spent puberty and beyond pretty much skin-and-bones, just wishing I could put on a few pounds to fill out my Jordache jeans; so cellulite was, as yet, unknown to me.

I learned a great deal about cellulite from the Greek God.

This is what I looked like with my cellulite:

Because of my “cellulite,” I hid those legs as much as I could.

I stopped wearing shorts and skirts and felt incredibly self-conscious when I had to wear a bathing suit.

In the photo below, I was certain the sun was unveiling a raft of cellulite on my fanny. Oh, to have that fanny back again: 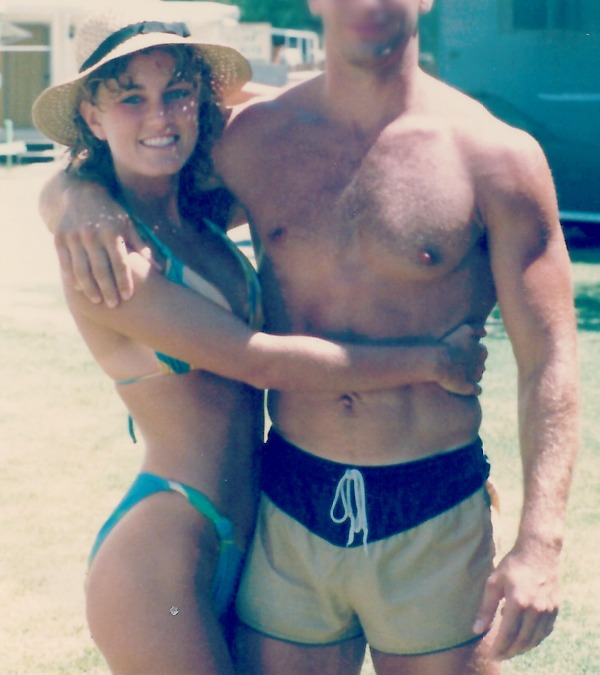 The Greek God had other criticisms.

While sometimes these things were said in jest, mostly they were said to keep me in my place.

And it wasn’t just the criticism of my body that was one of the signs of an abusive relationship; it was the adjectives attributed to my personality that hurt the most.

Some of these adjectives were:

The thing is, I’d never worn any of these adjectives prior to this relationship.

After the Triumvirate of Terror, I’d left high school having been senior class president, Homecoming Queen (pubic head notwithstanding) and was smart enough to earn 8 college credits on the Advanced Placement exams.

I thought I was The Shit. Until he made me feel like shit.

In making me feel smaller and smaller, The Greek God ensured that I’d never leave. Because I believed, considering all of my many flaws, that I was lucky to get him and should just put up with the times he treated me poorly.

It’s still hard for me not to cut The Greek God a break.

I know all of the reasons he behaved like an Asshat, and it’s possible, twenty-seven years later, he’s grown up, just as I’ve had to do.

But I found, at the time, it was important to really become steely-eyed about the Asshat if I ever expected to move on.

You can’t extend your natural empathy and understanding to the Asshat when you’re still enmeshed. You can only allow generosity-of-spirit and forgiveness to seep in once you’re finally and irrevocably through with the Asshat!

So here’s my rule of thumb when it comes to staying in or out of a relationship. It’s very simple.

QUESTION: Does the relationship build your self-esteem or tear it down?

Once you can answer that question honestly, you’ll be able to take the next step to Avoid Asshats and find Real Love.

12 thoughts on “What the Asshats Say to Make You Stay!”