When an Asshat tells you he’s an Asshat, Believe Him 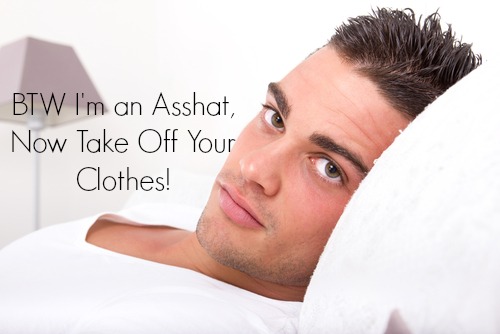 Here’s the funny thing about people.

They tell you who they are. And they often tell you right away.

Recently, I worked with an old friend of mine on a writing project.

We’d known each other many years, and I loved him in the way people love each other when they have a similar sense of humor and no serious shared responsibilities.

It’s always easy to put one’s best foot forward when you don’t share a child, a mortgage, a bed, a condom or a job.

So, when he told me he had a “little monster” inside of him that occasionally came “out of its box,” I shook my head in disbelief.

He then told me that a colleague had once reported him to a superior as not being “safe.” I scoffed aloud. I even rolled my eyes and shook my head.

“Obviously this guy had a real problem,” I assured my friend.

One month into our project. We had a high-stress meeting coming up and things were getting tense.

My friend was slowly evolving into someone I didn’t recognize. There were glimpses of mania in our writing process.

I found myself treading carefully, asking myself if I were somehow misunderstanding or misinterpreting his behavior.

We had our important meeting, which I thought began a bit shaky, but finished beautifully.

We left together. I was floating on air, ready to suggest a celebratory drink someplace Swingers-like, because we were fucking “money, baby,” when I noticed my friend’s clenched jaw, red face and his gait bristling with barely suppressed animosity.

But once inside the car, after we’d cleared the grounds of our meeting, he exploded.

There’s no need to go into detail, except to say the “monster” was out of its box.

It’s not my place to judge my friend. I have no idea why he’s plagued by this monster.  The only thing I can be certain about, is that I don’t have the fortitude to work with an abusive partner.

Eventually, that kind of relationship would foment self-doubt and eviscerate self-esteem.

He told me who he was right away. And I didn’t listen.

I should mention here, I’m not perfect. I have my assholicisms and, like my friend, I will often tell people right away who I am.

I might say to a prospective acquaintance, “I don’t have a lot of time for new friendships,” (aka, you’re not going to be able to count on me, my dance card is full),.

Or, “I have a tendency to say inappropriate things, but I’ll take a bullet for your child,” to moms sending their kids for a play date the first time.

Or, “I can be bossy and controlling” to my husband before we went on our first date.

The fact he didn’t instantly lose my number means, either we were meant to be, or he’s a glutton for chicanery.

It all boils down to, what can we tolerate? What is a deal breaker?

My last love affair with an Asshat, Mr. Cruelly Handsome, was indicative of my massive denial at that time in my life.

He was 6′ 4″, had a six-pack, wore a uniform and my ovaries impatiently tapped like typewriters atop my biological clock.

We met at a friends’ house where he pursued me like the hound the fox, extracting my phone number the way an ammunition technician diffuses a bomb. (Yes, I know, too many analogies, and I haven’t even been drinking sherry).

I was flattered, until a loyal friend informed me, the moment I left the party he went back inside and tried to get another woman’s phone number using the same tactics.

Granted, Mr. Cruelly Handsome didn’t tell me who he was, but his actions did.

Stubbornly, I refused to listen. I had one more chance to take a step back.

Three weeks into our courtship he arrived unexpectedly at a party I hadn’t invited him to. At this juncture the jury was still out, and I wasn’t certain I wanted to be in a relationship with him.

He found me, pulled me outside so we could be alone, and told me how much he wanted to be with me.

I’ll never forget this moment. He took me by both shoulders, looked me straight in the eye and said:

“You have so much energy, I just want to suck it all out of you.”

He stood right there and told me he was going to be an emotional vampire. And guess what? He was. For the next five years he all but sucked me dry.

So when people tell you who they are, listen.

Then ask yourself, worst case scenario, is what they tell you a deal breaker? Or something you can accept and live with given their positive attributes?

It’s amazing how much time and forethought we’ll put into purchasing a new piece of technology, a vacation, a car, a home, and how little we’ll put into selecting who we plan to give our vulnerable hearts to.

10 thoughts on “When an Asshat tells you he’s an Asshat, Believe Him”