What Happened When I Forced my Daughter into the Ocean 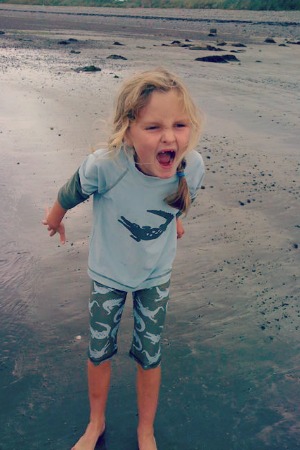 The day was perfect for boogie boarding at the beach.

The tubes were hollow; the pits weren’t dropping, there weren’t any bombs to pound you and you could even catch air on some radical ramps, Bro.

But there Clare stood at the shoreline.

Her 8-year-old arms crossed in front of her; a scowl on her face; feet dug in as I tried to tempt her into the waves with a brand-new Wham-O Morrey Woody 41.5 boogie board.

Dude, even Spicoli, a dyed-in-the-wool shortboarder, would’ve ridden it.

Clare was having none of it. She was afraid of the ocean. Period. The end.

Was this my child?

According to family lore, my mom threw me on her back when I was a wee toddler and dove through waves with me at Hendry’s beach in Santa Barbara.

I’d identified myself as sea nymph; body surfing, boogie boarding and scuba diving all over the world, ever since.

No child of mine was going to be afraid of the ocean!

And especially not in front of my two best friends, whose same-aged daughters were out in the surf having a blast.

I forced my kid into the ocean. Pulling her by the wrist. Wasn’t that the right thing to do? The only way to rid yourself of a fear is to walk through it, right?

I was sure once Clare rode her first wave in, she’d be addicted to the ocean. I’d have to pry her out of the water with a crowbar.

I managed to get her into hip-deep water. Made her get on the board and pushed her into the first good wave. It was the perfect wave. Not too big, not too small, she was off!

She rode that wave all the way in to shore.

When she got off the board she pumped her fists in the air victoriously, grinned broadly at me and later told me, “Mom, you were right. I just needed to do it to get over my fear. You are the best mom ever.”

Only that’s not what happened.

Clare did ride that wave into shore, but she got off the board crying and furious and didn’t come anywhere near the ocean for two years.

The ’70s called me that night to ask for their parenting techniques back. And every time we went to the beach after that was a nightmare. Clare just sat on the beach getting sunburned and wanting to go home.

But my friends, there would be redemption. Oh yes, redemption was nigh.

A couple of years ago my badass friend, call-name Tango 5/6, and my very own mother coaxed Clare back into the waves.

Without my intervention, she learned how to swim in the ocean and how to dive through waves.

A few months ago, she got her first taste of boogie boarding, pushing her own bad self into the waves.

I stayed back. I didn’t comment positively or negatively, because anything I might say would not be welcome.

I’d made a bad parenting snafu, crossed a boundary and had to really mind my Ps & Qs.

But, my personal redemption came this week, during our vacation in Newport Beach.

For the first time since the debacle, I donned my rash guard and entered the ocean with Clare.

My two best friends were with us at the beach once more, and wouldn’t swim in the ocean. Just not their thing.

I had my own boogie board, and Clare had discovered a surf board in a closet at the house we’d rented and was diligently trying to learn had to surf.

As I paddled out on our second to last day, I watched my daughter stand up for the first time on her board and ride that wave in.

When she got off the board, she pumped her fists in the air victoriously and grinned broadly at me.

Later that night, after we’d washed ten pounds of sand out of our hair and slathered our sunburned faces and bodies with Aloe Vera, she snuggled against me as we watched tv and said, “You’re the Fun Mommy on this vacation.” 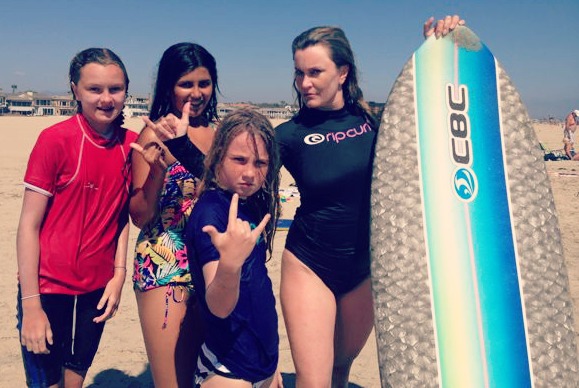 Have you made any bad parenting moves you regret? How did you get past them? Inquiring minds want to know… and a few more pics from our vacation.