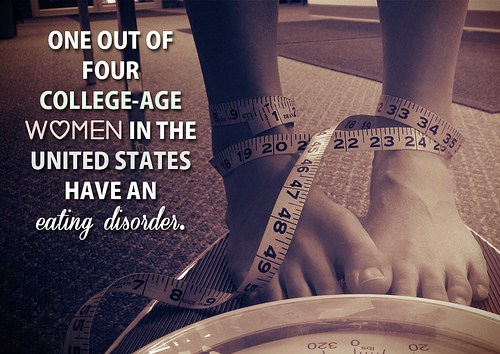 Ladies, have you ever bonded with fellow ladies by describing all of the things you don’t like about your body, and one-upping each other?

Here’s a potential conversation between my middle-aged friend Emily and me:

Me: The neck is going. It’s deeeefffffinitely going. I could pack a suitcase for a trip to Antarctica in this neck.

Emily: You think your neck’s bad, look at my left eye. That is, if you can still see it through this drooping eyelid. Quasimodo called to say he wants his face back.

Me: Your left eye’s got nuthin’ on my aging earlobes. They just keep growing. I have to be careful not to sweep them into a ponytail with my hair.

Emily: Remember that hang-glider you saw jumping off the cliffs in Point Dume? That was me using my earlobes as wings!

Ladies, any of you? Do you compete with your girlfriends about which parts of your bodies suck the most?

Recently Dove Real Beauty speaker, Stacy Nadeau, who participated in the first Dove Campaign For Real Beauty as a model, spoke to students at Gustavus Adolphus College in Minnesota about media’s affect on body image.

She calls the one-upsmanship of comparing body parts negatively as Girlfriend Poker.

“We started bonding over our bodies, and what we hate about them. We have so much more to offer. It’s time to change the conversation,” Nadeau said.

Nadeau went on to highlight how media influences the way individuals view themselves.

The Dove Real Beauty Campaign was the only positive media ad campaign out there until recently, when the American Eagle Outfitter’s brand Aerie refused to airbrush or retouch their models.

Nadeau shared an anecdote about a girl struggling with anorexia who plastered Dove ads all over the walls of the hospital where she was receiving treatment for her mental illness.

I was recently accused of bashing thin women because of my petition on Change.org asking the Yves Saint Lauren CEO to stop using images of malnourished models.

But I think my slender readers missed my point (or perhaps it was mis-worded). My position came from research I’d done.

I found endless articles where models came forward with the eating disorders they felt were a direct result of their careers.

And there have been a myriad of stories about how media influences civilian consumers.  In a Psych Central article, Dr. Carolyn Coker Ross M.D. says:

“Over time, models have gone from thin to emaciated, which has been mirrored by a growing problem of eating disorders and body image dissatisfaction.

“In 1975 most models weighed 8 percent less than the average woman; today they weigh 23 percent less.

“Compared to the Playboy centerfolds and Miss America winners from the 1950s, at least one-quarter of present-day icons meet the weight criteria for anorexia. Meanwhile, the average woman’s weight has increased.

I do feel I have to acknowledge that in a recent CNN article, reporter Maria LaMagna reported that 2% of the American populace are underweight and actively trying to gain weight. Body image issues also run rampant in that group.

However, the remaining 98% of the populace are in the normal to overweight range, and we need to see positive advertising for this group of people in direct proportion to these numbers.

Change is coming, people. Let’s be on the forefront of that change so the 98% of the population that isn’t underweight can start to heal their body image issues. xo S