The Thing That Put This Soccer Mom In Her Place 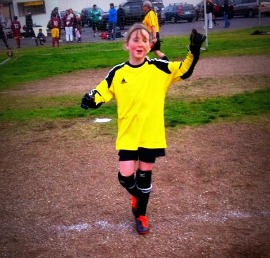 I’ve been reveling in some bragging rights about my daughter Bridget’s prowess as a soccer goalie.

She made the All-Star team this year and I heard people whispering she was the best goalie in the 10-and-under age group.

(I know because I secretly tape-recorded them and play it on a loop in my car).

Then, on Saturday, the tournament began.

Bridget’s team won their first game handily with a score of 2-0, my only complaint being that Bridget never got any action the whole game.

She just stood in the goal box practicing her hip hop popping and locking moves.

I wanted her to get some action, so her All-Star coaches could see just what a natural she is. That the rumors of her greatness were, in fact, true and that her genetic predisposition for athletic agility must certainly have traversed the DNA chain down from her mother.

The one who paces the sidelines yelling, “By Grabthar’s Hammer, never give up! Never surrender!”

Soon, the second game began. Both teams were evenly matched and Bridget had to stop dancing and pay attention.

The first few balls that came her way were easy pickins and I was a little annoyed that her punt kicks weren’t as impressive as they usually are.

She started to be more aggressive, mixing it up with the attackers, grabbing a few balls that should’ve gotten by her.

Parents started shifting toward me, telling me how good Bridget was.

I nodded stoically, as if these compliments weren’t, somehow, inflating my sad little soccer mom ego.

Then it happened. One of the attackers on the opposing team broke free with nothing but the ball and a green field between her and Bridget.

She had red hair (a sign of Irish brutishness), was thickly built, a powerful forward.

I could see Bridget’s indecision. Should she stay back and hope one of her defenders might catch the attacker, or should she go on the offensive?

She deliberated briefly and then lunged out of the box running as fast as she could toward the ball that was a little bit ahead of the attacker.

As Bridget dove for the ball the attacker caught up and kicked it hard straight into Bridget’s chest.

I could hear it hit her from across the field. Saw it bounce away and the next attacker arrive and kick it into the goal.

Bridget was down. The referee stood over her then waved for the coach.

He kneeled down to talk to her. I could hear her crying, see her rubbing her eyes. I was already planning the ice pack I’d put on her as she ate chocolate truffles and watched as much TV as she wanted after she staggered off the field and I drove her home.

But then she did it. She stood up.

She waved the coach away and walked back to the goal box to finish the game. No more balls got by her that day and her team tied at 1-1, but that really didn’t matter.

I was simply humbled, and proud, that Bridget got up and finished the job.

Some days I wish I could be more like my kids. Guess I’m bragging again.