Are You Spectatoring During Sex??

My first lover was a USC football player with 0% body fat. He looked like this: 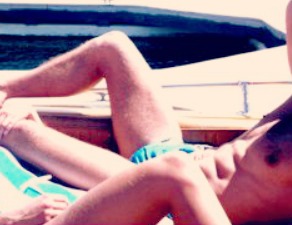 You’d think we would have had hot sex. And every now and then we did. But a lot of the time I was, what is called by political analyst and professor Caroline Heldman, “spectatoring” during sex.

Here’s what spectatoring during sex sounded like in my head in the Girl-On-Top position:

“My breasts are too small, he’s looking at my breasts and comparing them to tiny, hard little peanuts and did I remember to tweeze that one black hair that always grows out of my left nipple and why don’t my boobs even bounce a little?

In the, for lack of a more flattering term, Doggy-Style position:

“Is he looking at the cellulite on my bottom? Because it’s there. I can see it when I look at my butt in the mirror and squeeze it between my fingers.

“I know I’ve got at least ten or twelve little divots back there that’re probably reminding him of the lunar landing of Apollo 17.

“Also, why didn’t I wax yesterday? Does he feel like he’s having sex with Chewbacca?”

I highly recommend watching Heldman’s TedxYouth talk called The Sexy Lie where she posits that the sexual objectification of women is at an all-time high due to the onslaught of ads we see every day of our lives.

She cites studies that have concluded that the objectification of women in ads and media often cause women to self-objectify, which leads to an emphasis on physical perfection rather than intellectual growth and character development.

There are a host of issues that can crop up due to self-objectification (I’ll link to the ones that affect me):

I’m sure I also suffer to a lesser degree from some of the other issues on the list.

This was a bucket full of cold water dumped over my head as I realized that the time I waste in habitual body monitoring and body shame could be better spent helping to solve more important problems in my community.

The good news about my sex life today is that Henry doesn’t have a six-pack and neither do I, which means our sex is exponentially hotter than my youthful sex with a perfect male specimen.

Henry and I intend to go out wrinkled and chubby in our ’90s with a bang!

In the meantime, check out Heldman’s Talk here and share it with your kids as there are actions they and you can take to diminish the sexual objectification of women.

One 14-year old girl named Julia contacted change.org, set up a petition and got thousands of signatures in order to get Seventeen Magazine to stop photo-shopping their models. And guess what?

She won. Onward and upward.

You will also love Shannon’s book, “Married Sex: Fact & Fiction.” You can order that HERE.

9 thoughts on “Are You Spectatoring During Sex??”