My Name Is Tom 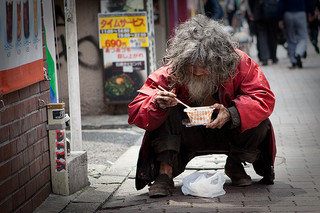 Last week I picked my daughters and a friend of theirs up from school.

We made a pitstop at our favorite taco truck in front of a car wash on Westwood and Santa Monica Boulevards.

As we waited in line to order, Clare noticed a homeless man coming our direction.

He was white, well over six feet tall, with long, lank grey hair.

His shirt was unbuttoned and his chest, red and blotchy, protruded as though his sternum had been broken and never healed properly.

His pants were rolled at the ankle revealing the purple flesh of his leg and the top of his foot. He wore loafers with no socks.

Clare recoiled. She’s particularly frightened of the homeless people that live all over Los Angeles, many of whom are mentally ill or suffering from substance addiction. She’s more sensitive to their unpredictability than the rest of us.

As soon as she saw him she wanted to abandon our taco quest, get back in the car and go.

I saw him approaching, but thought he would probably pass by us and I didn’t want this one person to send us fleeing.

I wanted to teach my daughters to live by my recently-passed grandmother’s mantra: “Be careful, but unafraid.”

However, when I glanced toward him to get his logistics I realized he was walking directly to us. We were his destination.

I had no time to think. I scanned his hands and body to see if he had any kind of weapon and he didn’t appear to.

I took some comfort in the fact that there were many people around. But I felt nervous not being in control of the situation.

So I decided to act. I turned to face him and took a step toward him. We came together like two people who’d been expecting one another.

“Hello, sir.” I said, “Are you hungry? Would you like me to buy you some lunch?”

A look of relief washed over his face, “Yes, please, I’m really hungry.”

He cogently gave me his order. He’d done this before. A large beef burrito and two beef tacos, if that was okay with me, and a Coke.

I gave his order to the taco vendor, along with mine and the girls’, then told the girls they could wait for me in the car.

They were glad to dart away, but I could tell Clare was still concerned for me.

The man and I stood near one another, waiting for the order to be filled.

It was awkward. I was tense and my body wanted nothing more than to put distance between the two of us.

We didn’t speak, because that was the social contract. His mind was a jumble with incomprehensible things, while mine was on high alert for any potential danger.

This wasn’t about intimacy and friendship. It was my way of taking charge and his way of getting what he needed. Right up until I handed the man his food.

“Thank you very much,” he said.

“You’re welcome,” I said, stepping back.

Then, with a great deal of dignity, he said, “My name is Tom.”

This caught me off guard and caused me to look into his eyes. I saw a person there, in the still point.

I imagined Tom as an infant, born into this world just like me, fresh, unblemished, full of possibility.

I wondered about all of the things that had happened to him that conspired to send him down the road he’s traveling now. I’d been luckier than him, that much is sure.

That split-second of recognition that we were fellow humans, equally important, hit home.

Then he strode away as purposefully as he’d come.

I turned and saw all three girls’ faces, like uncut flowers, pressed against the windows of the car, taking everything in.

This was one of those moments where all of my ambition, grandiosity, ego and pride just fell away.

Tom brought me back down to earth. He reminded me, yet again, that all that matters is how we treat each other. That’s it.