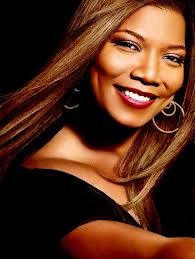 In the blogging world, I had a pinnacle experience tonight.

I was ushered onstage by Queen Latifah as one of 12 bloggers to read my work in front of 5,000 of my peers at the BlogHer 2013 conference in Chicago.

The room was so wonderful, I actually forgot to feel nervous.

In fact, I enjoyed it so much they practically had to drag me offstage. I wanted to print here the edited version of the post I read.

And to my fellow bloggers, thanks for your love and support. We, as writers, want nothing more than to connect. To know we’re not alone in the howling wilderness and that words have the power to show us how much more we are alike, rather than we are different.

1. If you gain weight — some of it will go to your boobs.

2. After 40, it isn’t just your ears and nose that get bigger, so do some of your lady bits.

Last month five mariachi singers rushed to the table where my husband Henry and I dined. They tripped, fell and were never seen again.

I think they fell into my vagina.

I can’t be entirely sure because I didn’t feel a thing. But sometimes in the shower I hear the faint echo of — “Quan tan ameda o sea Quan tan ameda.”

3. In your 40s you’ll take orgasms any way you can get them.

Let’s face it, people get very competitive about their orgasms — as if they were climbing Mount Everest. Did you summit? Or did you only make it to base camp?

Did you need an oxygen tank? Grappling hooks? A sherpa?

Or were you able to summit barefoot reading Holy Sanskrits in Nirvanic Bliss?

I have to stand on the big toe of my left foot, hips cantilevered toward Mecca, while singing peyote-inspired incantations over a burning sage bush as doves are released north-by-northwest into the Aurora Borealis.

These days I just don’t care about orgasms. If they happen great, if they don’t happen great. I GOT NOTHING LEFT TO PROVE, People!

Unless we’re Susan Sarandon or on a hormone cocktail, it’s unlikely we’ll become Teen Mothers. And we’re more likely to die from heart arrhythmia than STDs.

At our age, sex pencils out cost-effective. It alleviates stress, boosts immunities and even lowers the risk of cancer.

And for those of us who are religious and having sex out of wedlock — we don’t care if we’re going to burn in the everlasting fires of Hell — we just thank God we’re getting laid.

5. In your 40s you should occasionally try something new to spice things up.

Like maybe … having sex in the back of your minivan on Beverly Drive at 11 p.m. on a Monday night. Not that Henry and I did that. But if – hypothetically — we did do that –

— the police officer who shined his flashlight into the cargo hold — would find two middle-aged people so flattered to be booked on lewd and lascivious behavior that he wouldn’t even bother.

6. At our age, there’s no need to feel threatened by fantasies.

If you’re having sex in your 40s it might be with someone you’ve known a long time. Someone who loves you even though he’s seen you nurse your newborn on a toilet while trying to delicately deliver your first post-partum poop.

And it may be someone you love — even though he’s always leaving his poop in the toilet because he’s so proud of it.

So if, from time-to-time — in your mind — you’re making love to Chris Hemsworth — fully equipped with Thor’s Hammer –

Or your partner tells you that Sofia Vergara just broke up with her boyfriend as he one-hands your bra clasp open — neither of you takes it personally.

When I was younger sex was serious business. It was very Melrose Place with intense gazes and catatonic Andrew Shue repartee. “Sydney, I want you. Oh how I want you. But I’m troubled by my own beauty.”

Last month – when Henry rolled me powerfully beneath him — we both fell off the bed. I’ll walk the rest of my life with a limp, but after we finished laughing we made love on the floor.

Now you’ve got arthritis, carpel tunnel syndrome, cauliflower ear and phlebitis. You can’t possibly expect to be able to shuck pajamas from a horizontal position. And let’s not forget the magnitude of entropy in our lives. Henry and I have been together fifteen years.

We have two daughters we have to keep off the stripper pole. Two cats who might eat us should we nap too soundly. And a 10-year old mini-van that smells like Jimmy Hoffa’s corpse.

When we get into bed at night what we want to do is sleep. And if we’re not sleeping we want to watch hot people having sex on Game of Thrones or TMZ celebrity cellulite.

So when the Marriage Maintenance egg timer goes off we get into bed without the expectation of sex, but with the mandate of a massage.

Then — things evolve. This man who piqued my curiosity and passion fifteen years ago has his hands on my body.

And this body that has had children and various age-related ailments suddenly takes on dimension.

Henry’s hands follow the curves as he massages and suddenly I have hips and thighs and belly and breasts that are soft in places, and still firm in places and wholly human and corporeal for my brief time here on planet earth.

And for that time, regardless of my age or in-and-out-of-shapeness, I re-inhabit my body. I’m reminded that I exist. And This. Is. Sexy.”

If you enjoyed this article you will love Shannon’s book, “Married Sex: Fact & Fiction.” You’re in luck because you can order it RIGHT HERE!