When Victims of Dating Abuse Are Too Scared to Tell 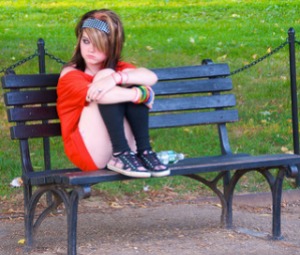 Yesterday I wrote about a former classmate who was murdered by her boyfriend after she broke up with him in 1983. (For this article I refer to the abuser as HE, and the victim as SHE, because statistically, a much higher percentage of girls are victims than boys.)

Today, I wanted to follow up with a teen dating abuse story that has a happier outcome. Nicole comes from a loving, Southern California Mormon family. She’s one of  seven daughters, her mother is a homemaker, her father a firefighter. During our interview she told me she might have been more vulnerable than other girls to an abuser because her father’s job kept him away from the family over long periods of time and she yearned for male attention.

But I know, from my comprehensive research, that teen dating abuse can happen to ANYONE’S DAUGHTER.

That’s because the abuser is at his best in the beginning of the relationship. He takes his time grooming his victim until she is hooked on him (sexually, emotionally). That’s when the abuse begins, little by little, until the girl becomes conditioned to keep secrets and withstand the worst kind of abuse.

Nicole’s nightmare began her junior year of high school. Because of her faith Nicole planned to remain a virgin until she married. Her boyfriend at the time became impatient with this and broke up with her. Nicole says this left her vulnerable and she rebounded with a popular classmate named Craig (a pseudoynm).

He played football on the high school team. After school he was a Fire Explorer. He wasn’t Mormon, but asked Nicole if he could go to church with her. Nicole’s parents loved him. He was charismatic, outgoing and great with her younger sisters. But three months in things changed.

Craig began to press Nicole for sex. By this time she was emotionally hooked. Even so, Nicole maintained that she wasn’t ready for sex, until the night Craig insisted she was.

As Nicole and I discussed this turning point she kept repeating the phrase, “He said I was ready for sex and I kept telling him I wasn’t. But he said I was …” as if she were trying to change the outcome of that sentence. But she couldn’t.

“He said I was ready for sex … so it happened.”

Over the phone line I could hear tears in Nicole’s voice.

Even though this memory was six or seven years old, it still had the power to devastate her. This prompted me to ask if what really happened was date raped? She responded “yes,” with the righteous anger of a person reclaiming their dignity.

On a side note, I can personally think of five women I know whose first sexual encounter was date rape. I myself was a victim of attempted date rape when I was twenty years old.

Date rape is common, and in some cases, more devastating than stranger rape because the victim often feels she’s somehow to blame.

Once Craig made his sexual conquest of Nicole, the abuse began in earnest, its trajectory was textbook:

1.  The abuser isolates his victim.

Craig wanted Nicole to pull away from her family. He didn’t want her hanging out with her friends. And if he caught her talking to a boy, he would pinch her so hard that he’d pop blood vessels. He made sure to pinch her in places no one could see.

2. He frequently gives her “advice” about her hairstyle, clothes or make-up.

Craig treated Nicole like she was his property. There were rules she had to follow or he’d get angry.

If she didn’t comply or made a mistake she received more brutal pinches. The physical violence began to include slapping and hitting in private.

3.  He has all the earmarks of an abuser.

Craig came from a broken home with no father, a single working mother who was an alcoholic. He was left to his own devices with no role models for a healthy relationship. When he hit Nicole at his house, his mother never intervened and would often just leave.

4.  The abuser calls his victim demeaning names, then laughs and tells her he was only kidding or tells her that she’s too sensitive.

Craig frequently called Nicole “trash” because she’d had sex with him. He criticized her body and pinched her in the places he thought she was “fat” or “flabby.”

5. When the victim tries to leave, the abuser escalates the violence; both emotionally and physically.

The first time Nicole tried to break up with Craig, he told her no one else would ever date her because she was akin to damaged goods. When she threatened to tell her parents and friends what he was doing, he convinced her no one would ever believe her.

That it was his word against hers and he was better respected. (Sadly when Nicole did finally share her situation with a friend, the friend didn’t believe her.)

When I asked Nicole why she didn’t go to her parents sooner, she said she thought she’d get in trouble for having sex.

Later, when things became really dangerous, she didn’t tell them because Craig threatened to “slit their throats,” which brings us to the penultimate stage of an abusive relationship. (The final stage being the death of the victim)

In our conversation, I told Nicole that my classmate, Anna Marie, was found in a shallow grave in an orange grove, which sparked a memory for her. She told me there was an incident where she’d forgotten directions to a place Craig wanted to go get a tattoo.

He was so furious he told Nicole he was going to take her out to the desert, kill her and bury her where no one could find her. Nicole believed him completely. She decided to follow all of his rules so her parent’s wouldn’t have to suffer the fate of never knowing what happened to their daughter.

This prompted Nicole to leave home, abandon school and simply stay inside Craig’s house night and day, cooking and cleaning for him, because she thought if she didn’t go anywhere or see anyone then he wouldn’t kill her.

While living with Craig, Nicole was only allowed to speak with her family on the phone if Craig was sitting right next to her. And if she said anything he didn’t like he’d give her one of his hard pinches.

Throughout this time, Nicole’s parents were frantic.

They knew something was terribly wrong, but due to Nicole’s vigilance in keeping them out of it, they didn’t know the details.

They’d gone to the police to get help, but the police said their hands were tied until Craig committed a crime. Feeling helpless and desperate they hired a private detective to follow Craig. Craig realized he was being followed, which heightened his anxiety and took the violence to a new level.

He choked Nicole twice. The second time Nicole was certain she was going to die. She prayed desperately to survive and believes God interceded on her behalf.

In an act of desperation, Nicole asked her parents for legal emancipation.

She thought if she could somehow eradicate all the stress on Craig, things would get better. To her surprise her parents agreed. They asked her to come home to sign the papers. This was the first time in months Craig didn’t accompany Nicole outside of his house. She went alone.

She entered her old home with conflicting emotions. She was more forthcoming than usual with her anxious parents, intimating that she felt trapped in her current situation.

That’s when two “transport people” emerged from hiding and took her into custody.

Nicole was loaded into a van and driven to a juvenile facility two states away. She was given an orange jumpsuit like criminals wear. She was ordered to squat and cough so her detention officers could make sure she wasn’t carrying drugs. She was ostensibly in lock down.

Nicole would stay in this facility for thirteen months.

She participated in group therapy every weekday and private therapy once a week. Detoxing from an abusive relationship and relinquishing that co-dependency can be more difficult than detoxing from drugs and alcohol.

Her first few weeks in rehab, Nicole wrote letters to Craig explaining what happened to her (this is often the case with victims. They are so enmeshed with their abuser that they feel like they can hardly breathe without that person).

All of her letters were confiscated by facility personnel. Very slowly Nicole began to unwind. That clenching fear in her chest began to flow out of her. Finally, she was ready to write her autobiography. She wrote down everything that had happened to her.

Every injury Craig meted out, every cruel psychological dig he used to effectively isolate Nicole and destroy her self-esteem. When it was finished, she read it to her group and her therapist. The day she read her autobiography she tested out of the orange jumpsuit and into regular clothes. She was symbolically moving back toward life.

Nicole eventually read her autobiography to her parents.

They’d had no idea the extent of what Nicole endured and were devastated they hadn’t taken this drastic measure sooner. Shortly after that, Nicole was released. Today Nicole is a mother-of-two, married to a loving, kind man.

However, she still bears the scars from the past. She says that sex with her husband the first five years of their marriage was often physically painful and emotionally upsetting.

She says it’s only been since the birth of her second child that she is able to have what she calls “normal sex.” Or what she imagines normal sex should be.

Nicole and Craig still live in the same town.

Craig has also married and has a child. Nicole is terrified for his wife and son. But on a recent Halloween she saw Craig across the street taking his child trick-or-treating. Their eyes met briefly before they both looked away. She realized, in that moment, that she wasn’t afraid of him anymore.

Love Is Respect or The Hotline: Teen and Dating Abuse

I have just been contacted by “Craig’s” wife who claims this story is false. It should be noted that this story was reported to me by Nicole and I believe her to be telling me the truth. I shall, however, concede this story is my opinion, not an indictable fact.  If “Craig” wants to tell his version of the story, I will make space here for him to do so.