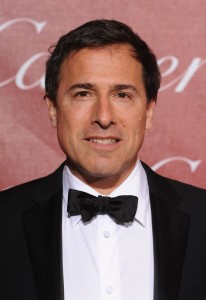 He’s the writer/director of Flirting With Disaster, The Three Kings, I “Heart” Huckabees and The Fighter, info for all you non-film geeks.

While I won’t go into the details of why I met with him — because I’m superstitious about causing things to nosedive and explode into a million charred and fiery pieces when I talk about them —  I will tell you that meeting him has affirmed my fanatic, hyperbolic love for writers, actors, directors and creatives.

I had the rare treat of watching Mr. Russell work with the sound mixer on a scene from his upcoming movie, Silver Lining Playbook.

(For the record, there will be Oscars aplenty for this film. I know that just from watching one scene.)

I was nervous meeting Mr. Russell as he is, along with Wes Anderson, one of my favorite writer/directors.

But, my self-consciousness evaporated when the theater darkened and the scene came up.

I was instantly sucked out of my head and into the director’s vision.

In a scene where Bradley Cooper’s character suffers a bi-polar mania episode which escalates to violence, I was struck by how the director managed to balance perverse hilarity with heartbreak; how he married the mundane so effortlessly with the absurd.

Silver Lining Playbook reminded me of risky theater at its best.

That glorious moment when the unexpected happens; adrenalizing actors and audiences alike; rocketing them to a different plane of consciousness.

In the span of that five-minute scene, I laughed, sweated, cringed, clutched my throat and gaped in awe at the sheer audacity of the performances.

When I got home it was like I was hopped up on Crank.

I was inspired to take more chances as a writer, make greater leaps, be willing to epically fail and embarrass myself in pursuit of that elusive, transcendent moment.

Thanks for that Mr. Russell. You better sharpen your pencil and start writing your speech

A quote from one of my favorite playwright/screenwriters John Patrick Shanley (Doubt), it’s directed toward actors, but applies to all creatives:

“Act from the depth of your feeling imagination. Act for celebration, for search, for grieving, for worship, to express that desolate sensation of wandering through the howling wilderness. Don’t worry about Art. Do these things and it will be Art.”