How to Throw a Greek Mythology Party For Kids!

First of all, don’t do it. Are you insane?

But, if you must the very first thing you should do is to make the Grown-Up Nectar of the Gods, which consists of Gin, Tonic, Limeade. Mostly Gin. Drink copiously. Ice cubes optional. You may begin drinking two weeks before the party.

This is kind of a MOM BLOG post. I prefer to be thought of as an elderly vixen blogger, but I’m having a minivan moment.

The next thing you do is send out invitations assigning a Greek God or Goddess to each child who is coming, which forces their parents to have to make, buy or think about making or buying an outfit. Why should you suffer alone??

Here is who came to our party:

(Don’t be fooled by their sweet faces. They’re perfectly capable of raining down fire and fart jokes). 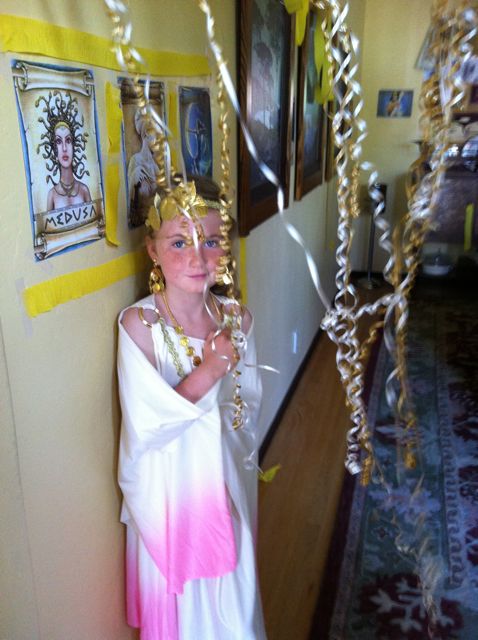 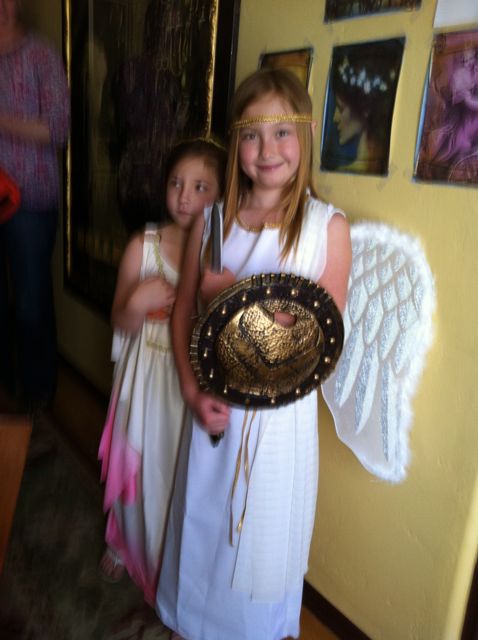 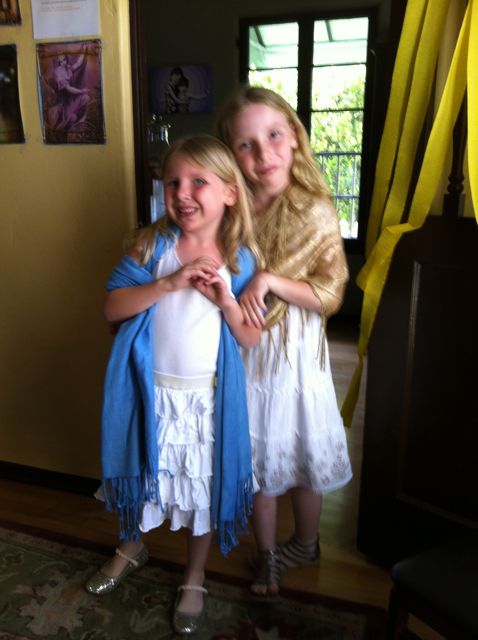 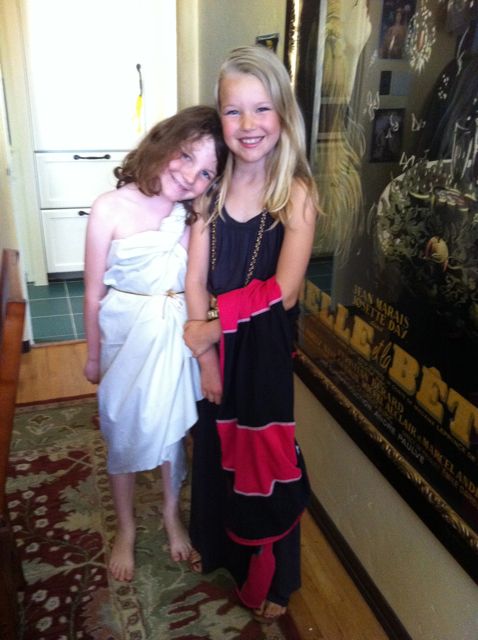 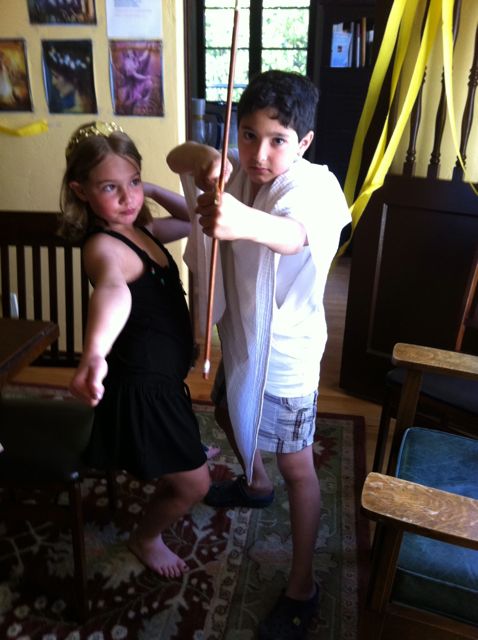 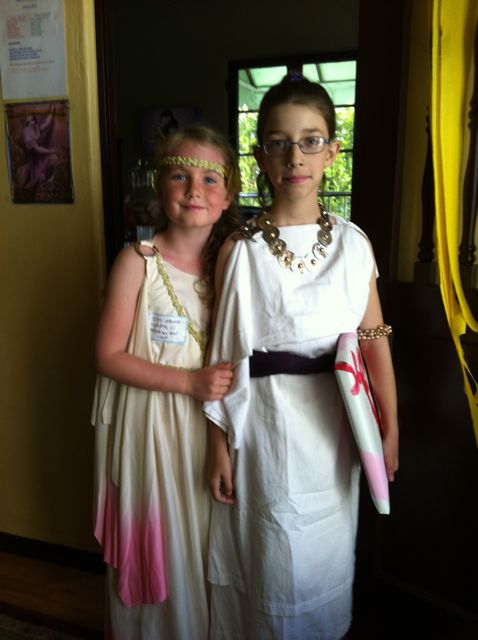 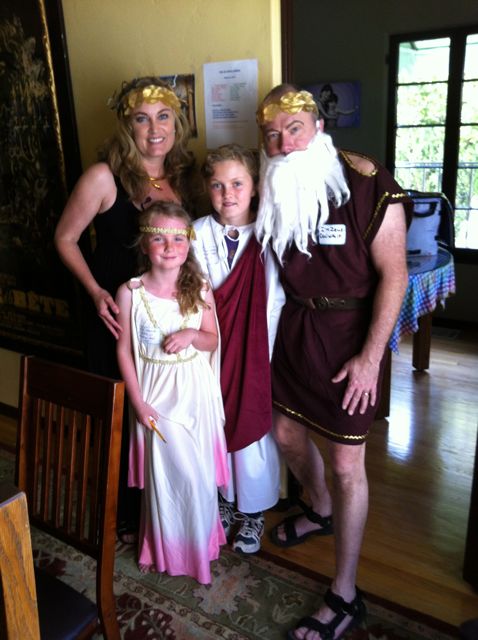 Next, decorate your house with photos of the Gods which you’ve purloined from Google Images.

Know that your printer will run out of ink halfway through.

You will drive cursing to Staples in rush hour. You will come back and break the printer while you are trying to shove the new cartridge in.

You will figure out a way to jerry rig the printer by holding your thumb in a painful position that will likely result in some disfiguring, excruciating Carpel Tunnel Syndrome in later years.

But which will now allow you to print out the rest of the f#@king Gods and Goddesses, which your children better remember in their reminiscences of childhood (instead of that time you missed the Spring f#@king Sing in the 1st grade). 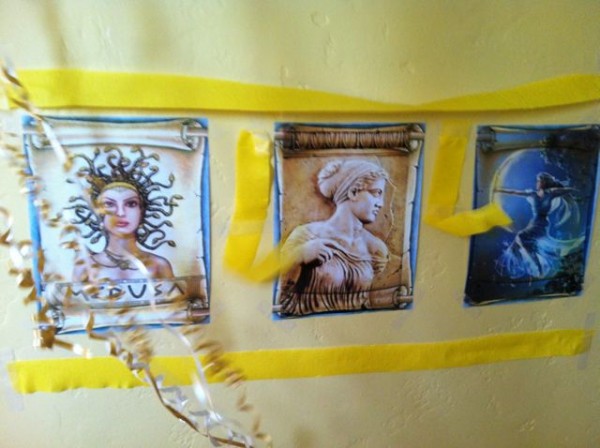 Make a centerpiece by throwing into a large spaghetti bowl some green leaves from your hedge (hopefully not doused in poison), real grapes, avocados, oranges and some ribbon and you’re good to go.

Curling the ribbon will only take six hours and you might cut your thumb off, but they can stitch it back on at the ER if you store it in milk. The thumb, not the ribbon.

For the record, I am not a creative arts-and-crafts, party throwing mom.

I hate doing this kind of stuff with the fire of a thousand Grateful Dead marijuana pipes. I rebel by being mildly bitchy, eating Thin Mints and watching Breaking Bad until 1 a.m.

But I have a real problem saying no to passion. And Bridget feels about Greek mythology the way I felt about Bobby Sherman wearing his little velvet choker when I was a kid.

Next, divide all the Gods onto two teams and pit them against one another in the Olympic Games.

You are welcome to scream shaming epithets at them if you like, but this may cost you later in therapist’s bills. Here are Team Poseidon and Team Athena warming up. It’s good to incite them into bloodthirsty, vengeful, spite.

Use Lord of the Flies as a reference: 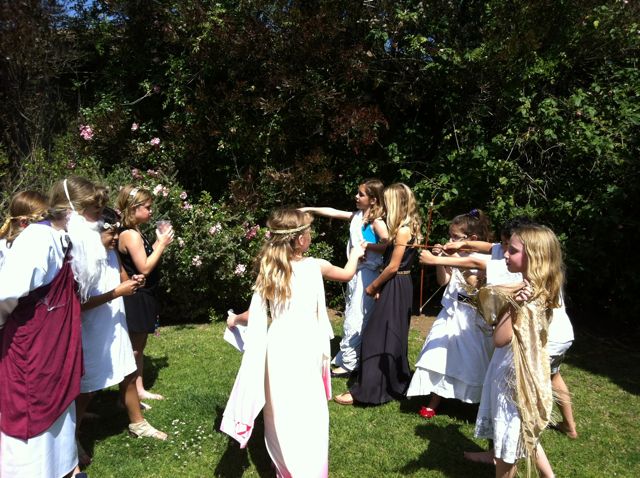 Game One:  Kill the Cyclops (aka Henry)

The Cyclops should be your husband or partner. You can trick them into doing this by telling them that they’re “making memories” for your children. (Like “That time Daddy had to go to the ER because Apollo shot an arrow through his one eye. But it was okay because Mommy was already there, having her thumb reattached). Here are the little hellions rousing the Cyclops from his cave: 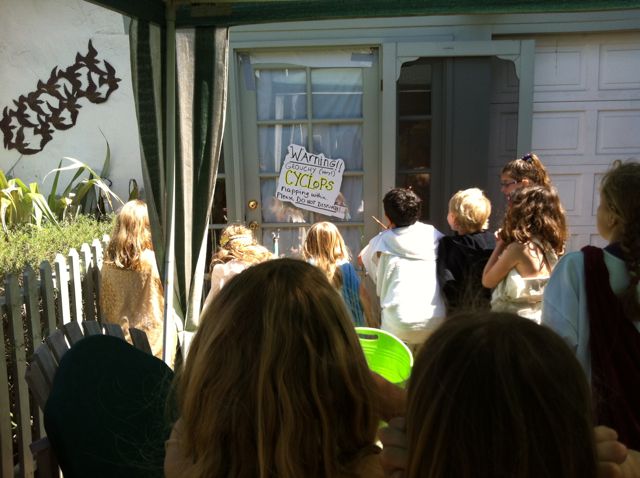 When he emerges everyone should think … how did that guy convince someone to have two children with him?

You will be owing this particular Cyclops many Womanly Favors after all of this is said and done which, as you can see by those teeth, may be a bit of a chore.

Next the Gods will kill the Cyclops by shooting paintballs at a little target held just over his face.

(More Womanly Favors are owed). Don’t be surprised if there are cries of “More ammo!” from the rampaging Gods and Goddesses. Remember to keep score. This part is very important, but if you do forget, lie and just write something down for each team preferably favoring the birthday girl.

There’s a lot of spit and possibly some boogers involved in this game. It isn’t for germo-phobes. This is what it looks like: 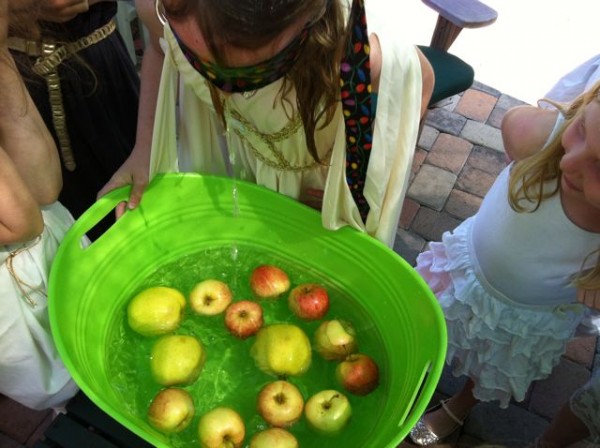 Three Golden Apples floating with what should be a bunch of little red apples.

Our red apples looked golden so we had to differentiate by size. (Get your mind out of the gutter!) Each Golden Apple retrieved is worth 10 points. We were quite startled by the lengths to which the Gods were willing to go for these suckers:

Game Three: The Battle of the Titans.

In some less discerning factions this game is known as … the balloon toss. You pair teammates together and the last couple standing wins 50 points for their team.

Just stop right there, this is a perfectly appropriate game for the under 10 set. We have a trampoline in our backyard with a net around it and we purchased a bunch of 99 cent balls from a party store. One team at a time the Gods and Goddesses enter the trampoline, henceforth know as The Arena.

For 60 seconds Zeus bombs the deities with the fireballs.

If they catch a ball, it’s worth 10 points. But if Zeus manages to tag them, they’re out and have to leave The Arena (I’ve read too much Hunger Games). The last remaining Gods in the arena at the end of 60 seconds win another 10 points for their team. The winners of these Olympic Games were Team Poseidon. They all lined up for a special gift from Zeus: 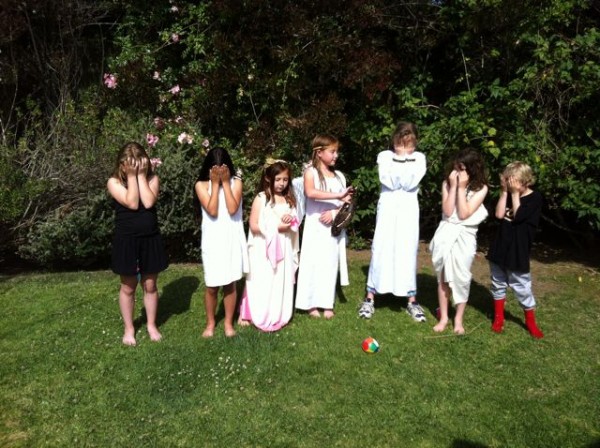 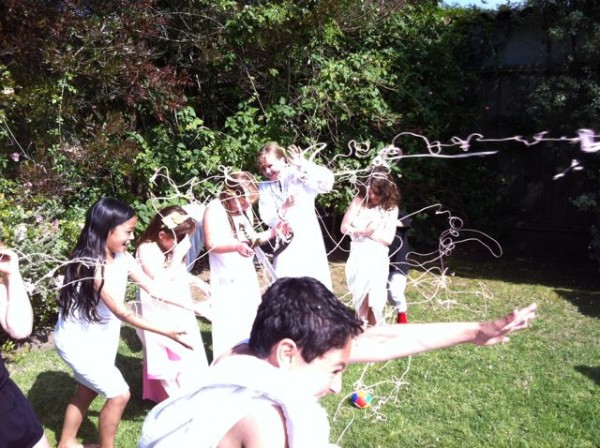 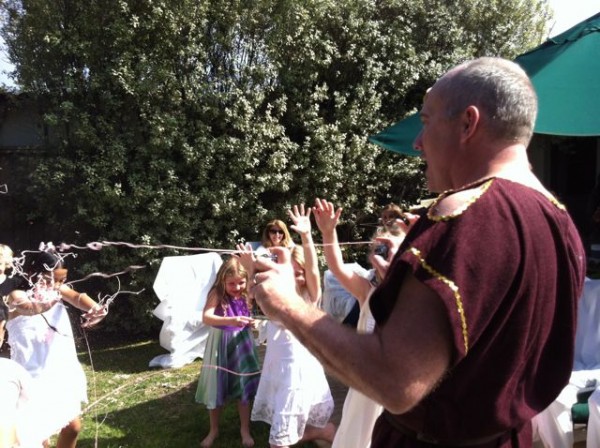 Then we gorged ourselves on ice cream cake and had to take to the Vomitorium (actually I think that was the Romans). 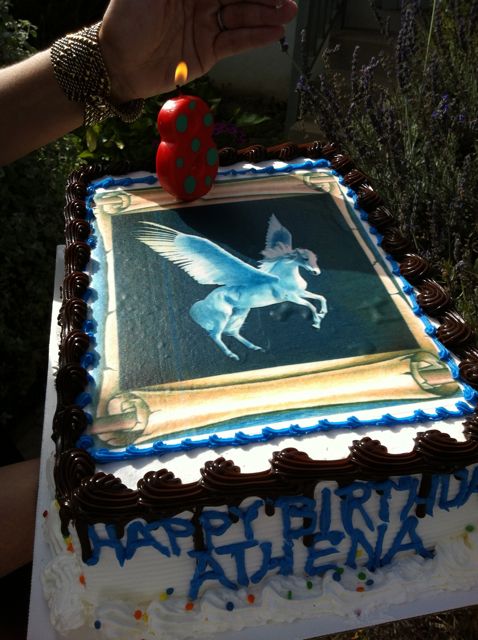 Athena and Aphrodite just before the cake Bacchanal 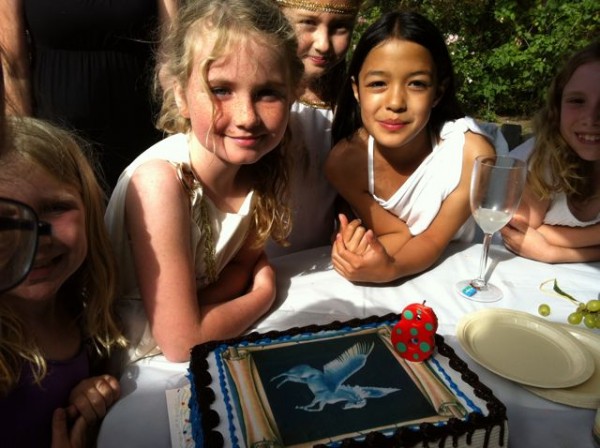 Finally, we gave up any pretense of sugar/crack abstinence:

Athena marked by her battle with the chocolate fountain.

When it’s time to clean up – if you are Medusa – you can sneak off and hide in the master bedroom. If any Gods or Monsters comes in and want you to help them wash their hands, re-pin their toga, find their shoes, show them the bathroom, dry their wet clothes, feed them again, clean up hummus vomit et. al. — you can just turn them to stone with your fiery eyes.

And that’s how you throw a Greek Mythology Party! Opt-in to Shannon’s newsletter HERE.

28 thoughts on “How to Throw a Greek Mythology Party For Kids!”