Do You Bore Your Kid?

One needs constant conversation and connection. The other is a day-dreamer who entertains herself with her own stories.

The squeaky wheel is the one who gets most of the grease. Okay, it’s Clare! I do feel I know Clare better than her sister Bridget sometimes, because she insists. She forces me to be intimate.

A conversation with Clare in bed after reading:

Me: Honey, I’ve told you a million times.

Clare: And don’t leave out the part about drinking the cool clear water from the babbling brook and seeing the fool’s gold under a rainbow. And scratch my back when you tell it.

Me: (in a Night Of The Living Dead tone) Once there was a little girl …

An hour later, brain fried, I escape her bedroom. I stagger to Bridget’s room to read to her and she’s asleep. Out cold. The easy child. (Yes, Clare, I know you’ll dig this up from my blog archives and take it to therapy 20 years from now – SO BE IT!)

So, yesterday, for the first time in years, Bridget and I had 24 uninterrupted hours alone.

Clare and her daddy were on the 4th grade field trip to Dana Point Harbor. Sleeping in a docked 17th Century Galleon on bunks in the main cabin with 31 other kids, three other brick-shitting parents and one wildly enthusiastic (is it magic mushrooms?) teacher.

There was no way I was chaperoning, because they only have two heads on the whole boat and I need room to spread the f%@k out. (“Heads” are “bathrooms” in sailor-speak, which I know because I lived on a boat for six months when I was nine. Because I’m worldly, edgy and really freakin’ cool, in case my bragging was too subtle).

While discussing what we should do for our Mommy and Bridget day, she proposed we make a stage, sew costumes, write and perform a play, which may or may not include various stuffed animals. I immediately wanted to flee to Mexico with drug runners.

I suggested we replant our herb garden, because the cilantro took the whole thing over and then it flowered, which supposedly makes it inedible. Bridget was thrilled, she loved planting the garden with me the first time.

I said, “I’m so relieved you like that idea. Sometimes, when we’re alone, I’m afraid I’ll bore you.”

I didn’t mean to say it, it just slipped out.

My kids entertain each other between fights. I don’t have to try too hard. Bridget turned and looked at me with those blueberry eyes, ensconced in a sea of freckles. “Oh Mommy, sometimes I’m afraid I’ll bore you, too!”

Good Christ I love that child.

Today I picked her up from school, just us. For our day we ate frozen yogurt, we planted lettuce and cilantro, which I know sounds annoyingly Martha Stewart-ish and all perfect mom-ish, but I totally suck sometimes and just want them to watch tv.

Then we walked to McDonald’s and I bought her a happy meal, which she ate in a chic little deli called Food where I ordered green beans with hummus in a saintly fashion, but ended up buying us both Valentines cookies washed down with a few of Bridget’s fries.

Then we came home and watched Modern Family, even though it’s iffy for 13+ (we love Gloria) and then I shared my favorite childhood show with her, Little House On The Prairie, for the first time.

Then I put Bridget in my bed. She unabashedly threw her arms around my neck and professed her love for me. Then wondered aloud why she wasn’t born first, and then I couldn’t have anymore babies.

She told me we had to do this again. And I thought, “How did this happen to me? How did I get to be the one of the two most important people in this little person’s life? At least for now.”

Thank you God, whose name I do not know, thank you so much. Please help me to not to screw it up.”\ 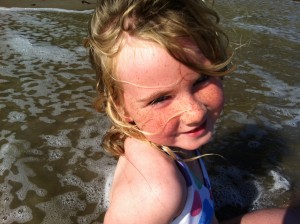