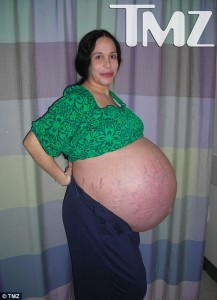 Fourteen kids. Eight of them are 2.

Yesterday I threw my daughter’s tights at her when she STILL hadn’t gotten dressed after I’d asked her several times. I only have two kids. I’m 46. I have a master’s degree. I’ve had years of therapy. I take Cymbalta and Elavil for my nervous digestive tract (a non-fecal way of saying “bowel”). I’ve worked hard for my sanity.

Yet I threw my daughter’s tights, still in their cardboard holder, at her like Mommy Dearest (minus the clothes hangers) and bellowed,”Geeeeett Dreeessseed!” while a vein throbbed in my forehead and my eyes bulged like a horse trying to escape a fire.

Clare didn’t know whether to laugh or cry. She’s nine. Which means part of her is sophisticated enough to think, “My mom is batshit. Wow, look how crazy her eyes are. Take another pill mom!”

But part of her is still little girl enough to have her feelings hurt. Once I calmed down I apologized for my Tights Tantrum because I’d completely undermined my credibility as the parental Voice Of Reason.

Clare had what appeared to be a slight pink dot on her chest – which looked a lot like the other slightly pink dots from her natural mottling on her chest – but this pink dot was the mortal wound I’d inflicted with the tights.

I had to kiss the wound.

I accidentally kissed an entirely wrong pink dot and had to be re-directed. Clare would occasionally forget to be forlorn about the Tights Attack, only to be reminded of it later by some random thing (like watching her sister put on socks) and the martyr-like expression would return making me want to throw another pair of tights at her.

But I kept my cool and my reward that night was a daughter who couldn’t stop hugging me and telling me how much she loved me and how she was sorry for not listening better. Holla!

But in my (very rare) insane moments I mentally travel into Octomom’s home and into her very body (don’t tell me she didn’t have a tummy tuck) and I look around her house at the squalling 2-year olds, the angry, resentful older kids and I think …

There’s no way she can diaper, feed, transport, bathe, kiss – let alone emotionally connect – with all those kids. I DO objectify her as a pair of over Restalyn-filled lips addicted to popping out babies who I can laugh at and feel superior to. But I can’t seem to divorce my life from hers.

I’m driving 5 kids on the Watts Towers field trip – they’re singing Bad Romance asking questions like, “Why does she want his stick in her rear window?” and pretend barfing, and really farting and giving each other wedgies and I think, how could I stand 9 more? Where would they sit?

How could I divert them all from the Lady Gaga lyrics conversation besides not listening to her inappropriate catchy tunes?

In Ralphs my girls fight over who’s going to push the grocery cart. How many carts does Octomom need? Can she afford all those juice boxes? How does she keep the lecherous bagger from bagging a baby or two when she’s not looking and eating them later with a fine Chianti and fava beans?

What the hell is going on over there in that Octohouse?

If I’m throwing tights at my kid, is she throwing anvils? Then I think about going to her house and picking up a kid or two and looking deeply into their eyes to give them my FULL ATTENTION whenever they want it which, let’s face it, I’m not going to do because I don’t want to look into my OWN kids’ eyes to give them my full attention every time they want it because that would be ALL THE TIME and then TIGHTS WOULD FLY!

I think the best thing I could do for Octomom would be to think of her as Nadya. And hope she proves us all wrong.

5 thoughts on “I’m Co-Dependent with Octomom”