The Christ Child is Born

The Los Angeles Lakers showed up for the cesarean with my first child Clare. Okay. Not literally.

My doctors – whom we’ll call Kobe and Shaq – kept discussing the three-point spread on the game between the Lakers and the Hawkes as I lay prone on the operating table, arms strapped to my sides, a sheet between my face and my belly, an epidural in my spine about to be vivisected.

I didn’t think it was time to talk over-and-back violations.

“I’m gonna violate you!” I thought. “Stop trying to divert my attention. I know you’re going to cut my stomach open and blood will geyser everywhere and I might bleed out on the table. You think I’m a spineless worm who’ll scream and beg for mercy if you don’t distract me?

“No! I’m that indigenous warrior in Apocalypto who runs through the dense foliage of the Amazon with two spears in his back and the blood-thirsty Aztec priests chasing him to make him a human sacrifice. Warriors don’t freak out over a little blood letting and I’m a warrior, bitches!”

I didn’t actually say any of that. I didn’t want to humiliate Kobe and Shaq by pointing out the transparency of their ruse, especially while they were holding scalpels.

So yesterday as I awaited my second cesarean strapped to the operating table en epidural, these very same doctors arrived.

I told them this time I wanted a blow-by-blow of my surgery, because I could handle it. Knowledge is Power. Besides, the info. might come in handy should I myself have to perform an impromptu cesarean on a hysterical crack whore in a dark, stalled New York City subway during the Apocalypse.

(See how I brought that back around? Clever.)

Soon I smelled the telltale odor of my burning flesh. That’s when I twisted toward my husband Henry, whose hand I was crushing and said, “What stupid idiot wanted the blow-by-blow? I don’t want the blow-by-blow! (then, in a whisper to Henry)

Okay honey, here’s what we’re gonna do, okay, you start talking Lakers to distract them.  I palmed some episiotomy scissors, I’ll cut the straps, you yank out the epidural and wield it like a scimitar as we back out of the room. Okay, go!”

Henry seemed not to have heard me as he started gossiping about a mutual frenemy who I’m jealous of. Henry never gossips.

He’s not small like that. So I thought – Has he gone crazy? Yes. Crazy like a fox!

He completely diverted my attention. I drifted into the euphoric land of Schadenfreude.(Google definition: “Taking pleasure in the misfortunes of others”).

Listening to Henry gossip satisfied me almost as much as reading the Celebrity Cellulite edition of Star Magazine. (I knew Gwyneth had cheese on her bum, the ectomorphic over-achiever!  But I digress.) It wasn’t long before I heard…

I emerged from my Gossip Coma to see Kobe pushing down on the top of my belly and POP! Just like that our Bridget was born.

She had black hair as thick as a cat’s pelt, exquisite chubbiness and a red, furious face. She let loose the cry of a 300 lb. middle linebacker for the Cincinnati Bengals being plowed over by a Steeler.

It was a glorious sound, full of outrage and thirst for revenge. The Christ Child was born.

Henry waited a chivalrous interval before he ditched me and ran to the warmer to watch a nurse clean Bridget off and to cut her umbilical cord.

As I lay awaiting my baby, Shaq and Kobe began putting my organs back in my body. A wave of nausea hit and I knew I was going to hurl.

Immediately I flashed to the scene in The Verdict where Paul Newman sits despondently before the hospital bed of a young woman on a ventilator who’d become a vegetable for life because she puked in her oxygen mask during delivery.

“I think I’m going to throw up,” I yelled, expecting a cavalry to rush in.

Instead, a nurse casually proffered a demitasse pink bowl for me to puke in. There was no way the volcanic spume I was about to unleash would fit in that bowl.

I retched. A dribble of spit emerged on my lower lip. This, I surmised, is why doctors don’t let you eat or drink anything for twenty days prior to surgery. Not just because they’re a bunch of sadistic bastards. 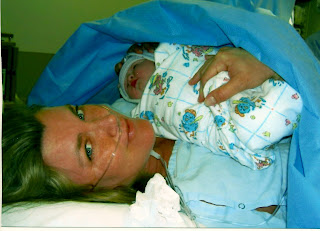 The nausea passed and they brought Bridget to me, wrapped like a leetle burrito.

I felt exactly the same as when they first gave me Clare. A surreal indifference (possibly caused by my body going into shock). And I was also struck by a wave of fealty to Clare. I would love this baby just a little less.

Then, in the recovery room, while I was still high as a sheik in a Balinese opium den from the epidural, they put Bridget on my naked chest.

Like a seasoned cowboy roping steer, she latched on to my left breast and suckled. She took possession of me and I was lost. Hopelessly in love.

I held her close, stroking her luxurious mane thinking with cackling glee, “You are mine, mine, all mine.”

Being luckier than I had any right to be, I was a mother again.

4 thoughts on “The Christ Child is Born”