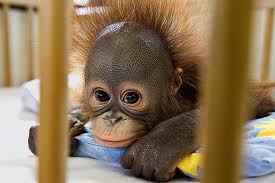 In the last ultrasound our baby’s profile looked like a small ape baby face AND our house has been destroyed.

Both things I blame on Henry; he has opposable thumbs and he had the house retrofitted.

Henry’d noticed the floors in our home had sloped 1/16 of a centimeter over the last ten years and I didn’t care.

Despite my threats to sit on him Henry arrived with Abdas the Retrofitter who swore on his mother’s eyes there’d be no damage to our house except perhaps “some hairline cracks here and there.”

I was sitting in the outdoor office while the retrofitters worked when I was unpleasantly startled to see Henry hovering like the Ghost of Bad News just outside the door, eyes suspiciously moist.

Instead he croaked, “Our walls, our walls.”

I charged into the house like the Cavalry to discover there were no hairline fractures here or there, but 7.0 Richter scale fractures everywhere.

Along with plaster falling in thick slabs onto baseboards that’d been wrenched six inches above the floors in all the back rooms, which includes our chimp child’s waiting nursery.

Henry was so mad at himself I couldn’t even yell at him. Cheated of this last remaining pleasure, all I could do was sigh and moan passive-aggressively. We would need workmen, which always spelled trouble for us.

Right before Clare was born we’d decided to convert half our garage into an outdoor office so we’d have more room for the baby.

We hired Sheldon, a man my stepdad recommended, and Sheldon’s sidekick, Gary. They were, respectively, seventy-five and sixty years old.

Sheldon wore glasses so thick you could start a forest fire just turning them onto some sage brush on an overcast day.

Gary was rotund and prone to falling asleep whenever he sat down. Once I caught him sleeping sitting up in his truck. I thought he’d died by choking on the sandwich still clutched in his Kung-Foo grip.

The first day of work both Sheldon and Gary ended up bleeding from the head and dropped a slab of cement on Henry’s hand when he tried to help them out.

Visions of paramedics carrying their inert bodies from the work site filled my head, along with fears of ensuing lawsuits. When I confronted my stepdad he said, “Sheldon’s my secretary’s boyfriend. He seemed like a nice guy, but you have to do your homework before hiring someone.”

I wished, briefly, my mother had gone for husband number five.

Henry and I agreed to pay Sheldon and Gary by-the-day which at the time seemed economical, but most days they only worked a couple of hours because they couldn’t continue until something was “completely finished drying.”

Clare was crawling by the time the job was done and their by-the-day total could’ve paid for her medical school. Or a mini-brow lift.

This time I called our painter Jerry and begged him to ride in on his white ladder and fix it all for the sake of our unborn primate papoose.

He said he doesn’t do plaster. I told him he could shore the holes up with buffalo dung for all I care, just do what it takes to make it look the way it did before. Jerry looked skeptical.

I said if my protruding belly wouldn’t appeal to his sense of urgency perhaps paying by-the-day would?

While Jerry mulls this offer I sit at one a.m. in the kitchen eating ricotta cheese from a tub while Henry sleeps with his head burrowed protectively under two pillows and Clare dreams of leaving me for the babysitter and our little Rhesus monkey in my womb gets the hiccups.

1 thought on “The Ape Baby”