As I swallowed a third Tums to quell the pillaging heartburn that comes of eating chicken milanesa when you’re nearly eight months pregnant, I dreamt of not being a mommy for one whole week. 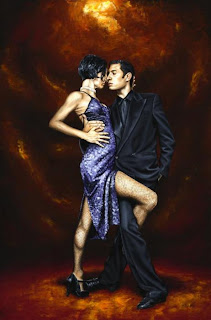 I want just one measly week to be a world-renowned ballroom dancer perhaps named Elizaveta.

My partner would be a well-muscled heterosexual man named Antonio (could be Banderas, but well-muscled will do).

Our specialty would be the Tango. The dance of deee-zire.

I’d have a lustrous black bob instead of my currently no-highlights-when-preggers beige frizz.

Antonio and I would be the darkly enigmatic couple from Slovakia; never smiling, filled with dangerous pathos due to Soviet Repression and our own brooding hot-bloodedness.

Audiences would swoon as we whipped across the dance floor, two thoroughbreds stretching our necks toward the finish line.

After winning the Golden Cup (Medal?  Bell?  Shoe?), we’d retreat to our five-star hotel suite in the Lugarno along the Arno in Firenze, Italia.

From our riverfront window we’d watch tourists haggle for cheap gold on the Ponte Vecchio before drawing our curtains and retiring to the boudoir where Antonio would lick ice-cold ironically Russian vodka from the deep well of my trembling belly button. Fade to black.

I’m not the only married mommy with a desire to dwell in fantasy.

My friend, we’ll call her Ophelia, is in love with Viggo Mortenson. Although they’ve never met, she’s certain that she and Viggo are soulmates.

They’re both artists, photographers, poets. They both have cleft chins; Ophelia’s cleft is demure and ladylike, Viggo’s more of a swashbuckling Sir Valiant. The only impediment in the bowling green is Bart. Ophelia’s husband.

Bart has no cleft. He’s not an artist, photographer, poet. He’s a pragmatist. He made Ophelia pay off her Visa bill before he’d marry her. He balances the checkbook every month. He brings home the bacon. He’s a one-woman man, day in, day out.

He’s the father of Ophelia’s child and she loves him hence she both dreads and desires meeting Viggo, her day of reckoning. For she knows he’ll immediately identify her as The One (rejecting advances from Mila Kunis and other such starlet flotsam).

And she wonders, really wonders, whether she’ll stay with her family or meet her destiny with Viggo.

Here’s what I think. Fantasies are meant to stay fantasies or they lose their magic.

I learned this quite early. I was in my junior year of high school when a long term-sub I’d lusted after actually made a pass at me  (despite my back zits and A cups). The allure of taboo fell away and suddenly I wondered what was wrong with him. Couldn’t the old guy get women his own age? (which was 26) I was “totally grossed out!”

I used to feel slightly guilty about my ongoing affair with George Clooney in the Cap d’Antibes of my mind. But now I realize the fantasies are vital to the longevity of my marriage.

I’m able to have the real world sex life with my husband, at times rich and surprising, at times mired down in life’s tedious details.

And on other days, when I feel tired, ugly, stale and boring, I’m able to have the fantasy sex life with movie stars or the sewage contractor working on Beverly Glen, no harm, no foul.

(Note here: For me fantasizing about people I actually know and interact with frequently is a slippery slope best avoided, having said that…)

The fantasies seem to break up the tedium of fidelity and protect it at the same time.

There are nights when Henry holds me that I suspect it’s actually Salma Hayek he’s holding (although in my current condition perhaps it’s Monique). And I suspect were my friend Ophelia to ever actually run off with Viggo, she’d be calling Bart from location in New Zealand, begging him to take her back.

She’d discover Viggo’s weirdly religious, a pothead, impotent or incontinent. That his cleft collects food particles. She’d discover somewhere along the line that he’s human. And I suspect Antonio would leave me for a Serbian flamenco dancer named Svetlana.

But for one week … just one week … in my mind at night, lithe thighs twist and turn together in a fiery embrace.  Tango!