Just our luck, she has it in for Clare.

My daughter and I try to enter the classroom discreetly, keeping to the edges of the room, dressing in neutral colors, camouflaging amongst a clamoring crowd of toddlers at the paint easel, but somehow Scarlet sniffs Clare out, like a bloodhound the hare.

She runs directly at Clare, grabs my child by her irreproachable cheeks and plants a firm kiss on Clare’s Cupid’s bow lips. Like a flag on a cheese souffle.

I stand immobilized as Scarlet keeps grabbing and kissing a frightened Clare trying to find an appropriate way to intercede as all the other mother’s “ooh” and “ahh” over what seems to be a charming spectacle.

But my kid ain’t likin’ it.

Scarlet’s mom, Jenny, sits nearby with a beatific expression on her face as her child mauls mine.

Jenny has cascading corkscrew curls tumbling down her back. She wears diaphanous hippie clothes and is always quoting The Universe i.e. “The Universe sends us messages we need to be aware of.”

She has three older kids besides Scarlet; boys with names like Hopper and Doc.

She’s a cool mom, laid back, while I’m wound tighter than a gymnast’s butt.

Clare’s lips begin to tremble and she bursts into tears under the Scarlet onslaught.

The next time Scarlet approaches Clare to mete out her daily mauling, I place two stiff fingers against her tiny birdlike chest. “Clare doesn’t like that,” I say, sounding eerily like DeNiro circa Taxi Driver.

A hush falls upon the room.

The other mothers quickly look away, as from a mob hit in a gin joint. Jenny quickly scoops Scarlet up in her arms and moves fluidly away from me and my child, the anti-Christ. 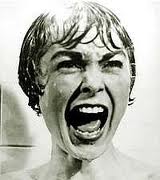 I have to give myself a break for my ineptness in the situation, because Scarlet is Jenny’s fourth kid and Clare’s my first pancake.

And Clare hasn’t learned how to stop unwanted advances because she hasn’t had three older brothers to battle.

Still. I doubt my ability to intercede successfully on my daughter’s behalf, because deep down inside I know the truth.

That was the day in sixth grade that my best friends Cheryl and Alicia finally stood up to girls we’ll call Tigerlily and Cheyenne, who’d been bullying all three of us throughout elementary school.

Tigerlily and Cheyenne weren’t particularly big or brawny, in fact, I stood a good foot taller than them both, but they totally scared the crap out of me.

One thing they’d do is they’d follow me from homeroom to the bus stop after school describing in great detail how at any moment they were going to “kick my ass!”

And then, I suppose as a trailer to the main event, one of them would deliver a painless, but humiliating flat-footed kick to my ass.

My reaction to this harassment was to pretend it wasn’t happening.

I’d keep my face straight forward, heart pounding, palms sweating, walking as quickly as I could, my stride uninterrupted save for the intermittent butt kick I’d yelplessly receive.

Sometimes, the bullying would stop for long periods of time and I’d begin to relax.

But then, for no apparent reason, it would start up again, say in the middle of a round of four-square in the fifth grade.

Tigerlily, now a Hall Monitor, would stop me as I exited Mrs. Babcock’s reading hour on my way to first lunch.

She’d make me sit in a small triangle of grass near her beat where she’d force me to eat my bagged lunch.

To add insult to injury, she’d make me hand over my hard-boiled egg.

I got to where I was hiding my hard-boiled egg in my training bra. I’m certain a lot of my former fifth-grade classmates think I have only one breast.

When they were bullying me Tigerlily and Cheyenne would stop bullying Cheryl and Alicia.

When they were done with me they’d start back in on my friends who they seemed to view as a single unit, CherylandAlicia.

My friends had been trapped in bathrooms, on top of slides and spanked on their bottoms with flat, heavy rocks during a particularly gratuitous session of playing “House.”

Unbeknownst to me, a fire of outrage had been building inside my friends slowly but surely.

And on that fateful day of June 11, 1977, while I was performing my role as fill-in secretary for Mrs. Wiggins during her lunch break, Cheryl and Alicia had had enough.

The bullies cornered them on the cannonball court and my friends snapped. They whipped combs (which were quite popular at the time) out of their back jeans pockets and, pointing them like switchblades, shrieked in Mickey-Mouse-on-helium voices, “You want a fight? You’ve got a fight!”

They stood their ground, ready to rumble. And an amazing thing happened.

TigerlilyandCheyenne melted like the Wicked Witch of the West into nice girls. They never bullied me or my friends again. Somehow I was scott free having risked nothing!

Years later, in my twenties, I ran into Tigerlily pregnant with her first child. She sincerely apologized to me for the years of torment she’d caused.

I appreciated the apology and forgave her.

But, I could never quite forgive myself for riding my friends’ coattails to safety. I worry I’m still yellow and wonder if I’ll be an effective advocate for my kids.

Next, it’ll be asking potential sleepover parents if they’ve got pitbulls, guns or any strange live-in uncles.

Don’t even get me started with dating and drugs (why do these seem to go together? Is it the alliterative “d”?).

It’s annoying how being a mom forces me to poke around in all my underdeveloped places and stretch the limits of my comfort zone.

“The Universe never leaves you alone for a (freakin’) second.”

7 thoughts on “Bully For Me”