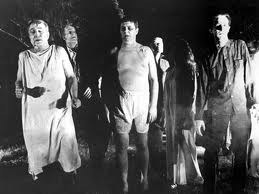 It’s the Night of the Living Dead up in here.

Henry and I went to bed at eight-thirty – it’s now midnight. I’ve been up to pee five times and to eat a tangerine and now to post.

Henry’s been up to pee six times (is he pregnant?) and to eat a bowl of Puffins and then to shower, leaving the entire Pacific Ocean on the bathroom floor.

Two more neurotic insomniacs never lived, except maybe Woody Allen and Mia Farrow and look how that turned out (Soon Yi, I believe, sleeps like the dead).

It’s the flu that’s got us freaked.

This is supposedly the worst flu season in the history of mankind. It’s some kind of Japonic strain you can’t pronounce unless you’re fluent in Tohoku dialect.

There’s no anti-serum or inoculation or whatever and it’s the kind of flu that predominantly kills pregnant women and toddlers, which means me and Clare.

And we didn’t get flu shots and they don’t have any more because of the droves of people who’ve rushed to get them even though they probably don’t work.

Henry keeps helpfully reminding me that the flu killed two million people in 1906, wiping out whole tribes of Native Americans, bloodlines which are now lost forever.

He doesn’t want me to take Clare to any indoor play gyms or the mall or anywhere there might be humans.

It’s become apparent we need one reckless person in this marriage. Someone who blows on dice screaming, “Come oooonnnnn seven!” while tippling dirty martinis and betting the egg nest.

Someone who does arctic fishing, deep sea diving and para-sailing without hearing the theme music from “Jaws.”

But we come of Irish stock. And the Irish are nothing if not morbid. And obsessed with death.

My husband’s favorite book is Mass for the Dead. My dad puts x’s over the faces of dead classmates in his high school yearbook.

When we leave Henry’s parents’ home after a visit his dad tells us, “Drive careful. Don’t come home on a slab.” It’s been said that obituaries in newspapers are the “Irish sports pages.”

What can I say, we have a genetic predisposition for expecting doom.

As I write this I feel just the faintest tickle in my throat. Perhaps a bit of soreness, some post nasal drip … I will tell Henry to marry my friend Meredith when I perish from this Makasukiama flu.

Our children will need a good mother.